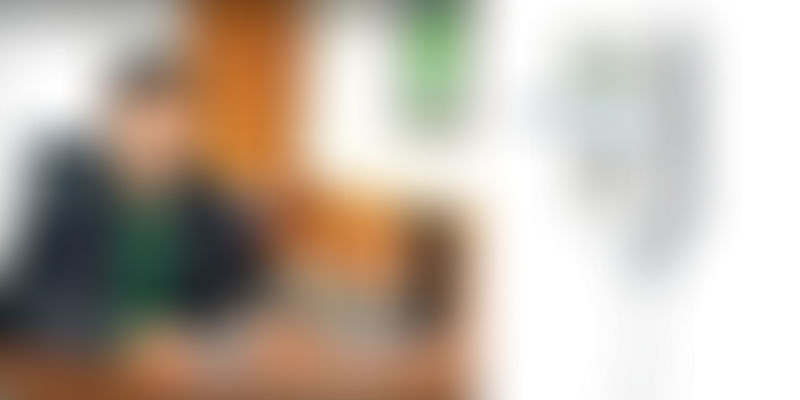 Every day for the past few years, Gyan Kesarwani kept one foot in the past, deriving an insatiable drive from the financially trying times he encountered. With his other foot in the future, he was innovating swiftly to usher in the next generation of technology, while keeping his day job as an educator for budding techies.

Today, he stands on the threshold of his destiny as he gets ready to leave the nest and join the infinite yet cutthroat world of inventor-entrepreneurs with his own line of products.

A study in frugality

Gyan’s father died when he was just nine years old. He grew up in a village and went to a kind of school one would take their own floor-mats to. “My mother could not save even Rs 1,800 a month for my tuition, hostel, and food in college,” he recalls. Even with the financial aid of Rs 6,000 a year; his mother had to sell their ancestral home for less than Rs 60,000 in order to meet their expenses.

He procured a bachelor’s degree from the MNNIT (Motilal Nehru National Institute of Technology) in Allahabad, and even cracked the GATE (Graduate Aptitude Test in Engineering) to pursue M.Tech., but could not afford the fees, and had to support his family of five.

As procuring an M.Tech, MS, or an MBA was essential for a decent career in the core industry, Gyan decided to explore his passion for teaching and joined FIITJEE Nagpur instead, and eventually became the Branch Head & HOD (Physics) there.

During his stint there, he kept a hawk’s eye on the move towards innovation and entrepreneurship in America that India was also catching on to over the past three to four years. “First, I learned how to protect one’s innovative ideas and then I invented many things based on my expertise in physics, production, and mechanical engineering,” he explains.

When Gyan’s factory was teeming with enough fully functional prototypes, he decided to christen it 'Skillers Inventions,' in December 2016. It is a hotbed of innovative consumer electronics and consumer goods, that he already holds patents or patent applications for, “to minimise the competition and enjoy the benefits of monopoly,” as he puts it. “In USA, inventors give their ideas to small and large companies. The concept of Open Innovation was non-existent in India. Before the Startup India scheme, no company gave much weightage to patents or intellectual property,” he says.

Necessity, the mother of invention

A power cut that lasted many hours in his home when his mobile phone was also discharged, gave him the idea for his first product – a device to take care of every pain point that smartphone owners experience – that is, power at any point, along with anti-theft, data protection, and temperature control. This led him to invent the ‘Smarty Charger’ in December 2013. The adapter-cum-power bank can charge even without power supply, and besides the above-mentioned features, is also shockproof and temperature controlled. It detects the location of the phone even if GPS navigation is switched off. And with worldwide aspirations, he has timed it perfectly to become the perfect solution to the Kill Switch Bill passed in California.

His washable toaster was also born out of similar circumstances in April 2014, when his wife was out of town and he was on a steady diet of toast. “I observed that it was very difficult to clean from inside, where the bread crumbs were present, and if some moisture was retained after cleaning, there was the risk of electrocution,” he says. USA’s Food and Drug Administration (FDA) have also written in their guidelines that there should be no food debris in the utensils. So, Gyan’s

So, Gyan’s jugaad is a washable toaster ‘attachment’, which is universal to pop-up toasters and prevents contact between the toast and the fixed part of the toaster, to get perfectly hygienic toast. They are also creating a new line of toasters wherein the easy-to-remove attachment will be part of its core design.

And the third product on their shop floor, which he invented in July 2014, was the 'UltraSafe Mattress,' with borders that can be raised by a single rotation around the baby, in order to prevent falls – and the design also happens to be more comfortable in general, hence suitable for adults as well. “It’s perfect for co-sleeping babies and is also a more attractive alternative than railings,” he says.

His sources of revenue are the profits from selling the products, and royalties from licensing the technology of their products. He wishes to get the word out through tech blogs and hopefully garner mainstream media coverage as well. Besides that, he will target customers at malls and through retail chains like Walmart, etc. He also retail through e-commerce channels (like Amazon, Flipkart), besides cracking deals with channel partners like Walmart.

He had kept his day job initially when he had to license his innovations, but when a few international companies started showing interest, and the Startup India Scheme gained steam, Gyan felt that most opportune moment to take the plunge had arrived.

But the terms and conditions laid by corporates were not acceptable to him, so, he decided to launch through the Startup India Scheme instead.

It is his last day at work today; one can terminate their contract at FIITJEE only on June 1 every year, when the new academic year starts. He first launched Facebook campaigns around Independence Day last year which got Skillers Inventions validation, and Gyan, the confidence to go full-time with it. It had a reach of over one lakh people and garnered more than 10,000 Facebook likes and several enquiries. These products will hit the stands in a few months.

And recently, the government also recognised Skillers Inventions as an innovative business eligible for several tax and funding benefits.

In India, even though his products do not have any direct competition given that they have innovative variants of existing appliances – his mattresses will be taking on ERD, Noida, Salcomp India; Potronics; Sleep well, Kurlon; Phillips; and his power banks will compete with GP Batteries International Ltd, Anker, Samsung Electronics Co. Ltd, Xtorm BV, Panasonic Corporation, Sony Corporation, Xiaomi Technology Co., etc.

His focus remains getting products manufactured by third party manufacturers and setting the ball rolling. “Depending upon the sales volume with time, we will have a sizable manufacturing unit and scale up suitably at different locations,” he says. It will also be at that stage in their lifecycle that he will go to VCs.

(His products shall go live in a few months. Keep checking this space for Smarty Charger.)