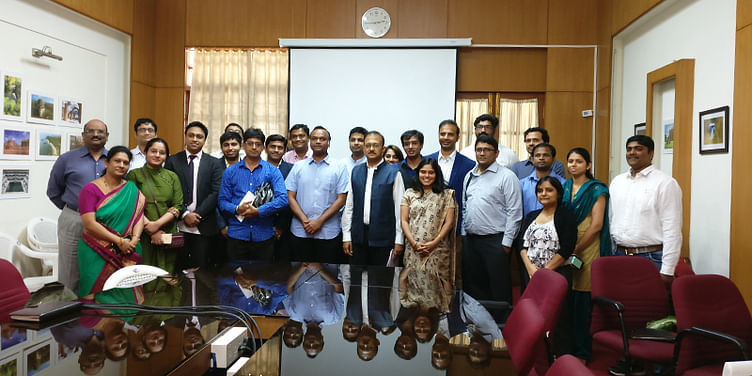 From robotics, biotech, communications to wireless safety devices and agri-tech, these startups shine a torch on why Bengaluru is on top of the world in the startup ecosystem.

They let you know if your bike is being towed or stolen, or who’s outside the door even if you are on the other side of the globe, or use a cycle for last mile connectivity from the metro station or simply call your doctor and upload your latest test parameters.

Twelve diverse startups that are part of the ecosystem touted as the largest in the world were funded by the Karnataka government today. These include companies working in robotics, biotech, communications, wireless safety devices and agri startups.

Continuing the government’s efforts to promote and support young tech talent, the department of Information Technology and Biotechnology announced grants worth Rs 3.18 crore to these 12 startups under the Idea2POC (proof of concept) scheme where each idea is entitled up to Rs 50 lakh with no equity being asked.

Idea2POC is a part of India’s first multi-sector startup policy launched by the state government in 2015 that aims to discover and encourage brilliant entrepreneurs who need early-stage funding to commercialise and scale the product.

“The funding will be in tranches. These 12 startups were chosen because they have the potential to make a difference and use technology to disrupt,” IT and BT Minister Priyank Kharge said while announcing the winners.

Gaurav Gupta, Principal Secretary, IT, BT and S&T said: “While Bengaluru is the IT hub of the country, there are startups in every field springing surprises. Our vision is to promote and mentor them.”

A last-mile connectivity foundation that provides cycles—NammaNimma Cycle Foundation (literally meaning ours and yours in Kannada)—received Rs 10 lakh.

Murali from the foundation said,

It is an initiative to enable cycling as an option for public transport that would provide last-mile connectivity between metro stations and offices. The idea is simple. If I provide 200 cycles, we want organisations and companies to provide some more for the common benefit. This way, the number of cycles that are available will increase and help ride sharing and reduce pollution.

Mithun Uliyar, Co-founder, Lightmetrics, a video analytics company, told YourStory that his startup is developing a Ridecam which analysis driver behaviour. Ridecam is a dashboard camera that is connected to the cloud and warns drivers is they exceed the speed limit, for example.

“It is targeted at fleet companies and helps to manage trucks and cab fleets. Ridecam continuously records the drive. Its robust algorithm helps companies to keep a track of good drivers and weed out the bad ones,” Uliyar said. The company will receive Rs 30 lakh.

With this grant, they are building a product for the Indian market and their prime customer base is expected to be from the self-drive rental market and trucking companies, he added.

Geotraq Safety received Rs 45 lakh for building smart systems for two-wheelers to ensure their safety. Gautham Kalathur said his device has been built with latest technology to detect motion, fall and sudden impact. Gyro sensors in the device attached to the bike sends a message to the owner whether the bike is getting stolen or towed by traffic police.

“It also has a SIM card. So that enables the owner to know the exact location of the vehicle once armed. In case there is an accident, it also send a message to the family and police,” says Kalathur describing the various uses a simple device like this can have in a country where two-wheelers have become a status symbol.

PiOctave solutions are in the home automation space. Its co-founders are Kiran Venkatesh Nayak, Anand Palassery, Nitish Kumar and Gijo Prems received Rs 30 lakh. Founded 18 months back, Nayak says their product helps save lives. Surebell is their video solution which allows those on the inside to see who is outside the door.

“There are many audio and video features in this. It allows you to record and place it on cloud. The best part is Surebell can be connected to all family members on their smartphones and allows them to see who is knocking on the door. We are working on integration to allow someone to open door. This is an interactive and smart security space where Chinese products have flooded the market. But the warning is that these Made in China products can share the video with anyone whereas we write the code ourselves and even customise. So, essentially, a person outside of the system cannot access the audio and video,” says Nayak.

They are also taking it to the next level where it is tailor made for those residing in apartment complexes. “If there is a fire, the system should alert neighbours too.”

Chethan Channakeshava and Pratap Palthady, Co-founders of Dr Live have already connected superspeciality doctors to their patients across the world. “We are in the on-demand video consultation market where doctors from corporate hospitals use this tech as a follow-up tool. Its like telemedicine but through a mobile phone and helps patients connect directly with their doctors. “It also has a secure instant messaging platform for uploading lab tests,” says Channakeshava.

The grant of Rs 10 lakh they received is more like a validation check for their idea, the co-founder concur.

Avinash Rao of ispAgro Robotics received Rs 20 lakh for his micro aerial vehicle. The company founded by him and Manipal Institute of Technology professor, Kamlesh Kumar, has filed three patents. This micro aerial vehicle folds itself in flight to reduce from one metre to half a metre; shoots bows and arrows to clip onto an object and has eliminated the need for a battery pack.

So how does it fly? “We send power from the ground as the aerial vehicle is tethered by a cable. The vehicle currently helps farmers spray pesticide on arecanut trees or water plants but does not carry any payload. A high pressure pump is attached to it from the ground to spray and it does not have to worry about coming down as it does not require batteries to fly.”

Rao says this tech has applications for repairing high tension towers as well as military applications as they develop further.

“It is not an autonomous drone and that means it does not require a DGCA licence to fly,” adds Rao.