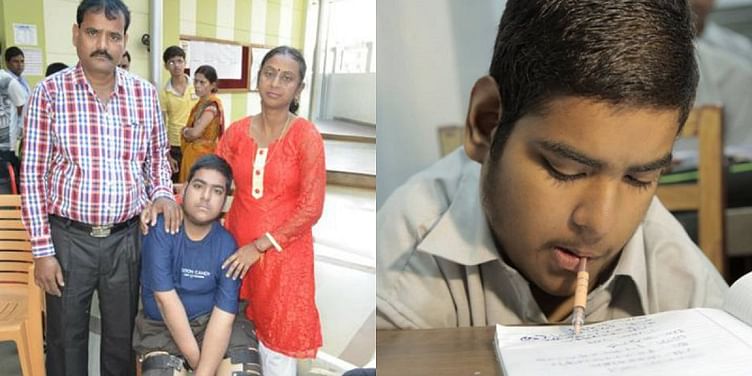 How does one look at an individual whose journey is a testament to never giving up? Meet the 17-year-old prodigy from West Bengal who is winning hearts with his achievements. Affected by arthrogryposis multiplex congenita (AMC), a disorder that develops during a woman’s pregnancy and reduces the mobility of the baby’s joints, hands and legs, Tuhin is now bound to his wheelchair.

Inspired by Stephen Hawking, the young lad sat for his 10th-standard exams in spite of the disability and wrote his exams by holding the pen in his mouth. As astonishing as that sounds, he went on to score 88 percentile as well. Tuhin aspires to become a physicist like Hawking and is eyeing the IITs for his further studies.

According to a report by the Hindustan Times, he appeared for his exams at the Central School at IIT-Kharagpur in West Midnapore district of West Bengal. Prior to this, he was training at Kota for his other competitive exams. Speaking to the media, Tuhin's mother Sujata Dey said,

Tuhin, who consistently scored more than 90 percent marks till Class 9, was expecting over 95 percent marks. Since he did not participate in the cocurricular activities due to his disability, his school could send only B2 Grade to the board due to which his overall percentage dropped.

Going to school and appearing for the Class 10 examination was not easy for Tuhin, who is 90 percent disabled. The school was 14 km away from their home and his parents ferried him there on his father’s motorcycle. His father Samiran Dey has a real estate business. His mother left her government job to focus on her son. The couple plans to stay in Kota for the next two years as their only child prepares for IIT entrances. The Allen Career Institute, Kota has waived off a whopping Rs 1.18 lakh as Tuhin's coaching fees.

Tuhin wrote his Class 10 exam without the help of a writer or using extra time given to students with disabilities. He is taking coaching for IIT-JEE at the Allen Career Institute in Kota and has been awarded twice for his exceptional talent. He was also awarded the National Child Award for Exceptional Achievement in 2012 and Best Creative Child Award with Disabilities in 2013 from President Pranab Mukherjee. Since his birth in 1999, Tuhin has undergone more than 20 surgeries. But that did not deter this boy from studies.