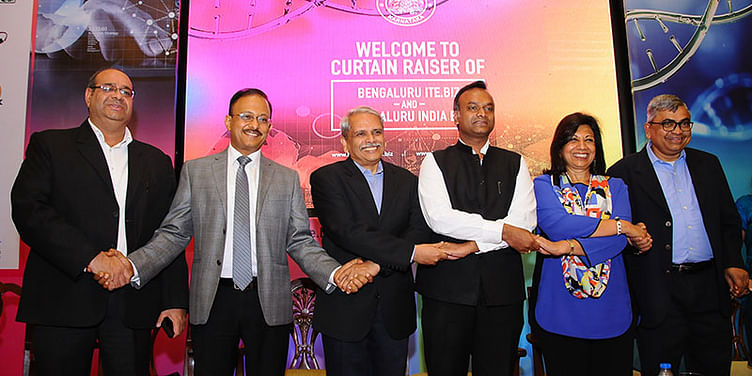 Two of Bengaluru’s flagship events—the BengaluruITE.biz and Bengaluru India Bio 2017—will be combined into one mega event this November to showcase the city's technology prowess.

Making the announcement at a curtain-raiser in the city, Kharge said,

Both the events have been combined as the aim is to make Bengaluru a leader in technology. We want to take this year’s event a notch higher and position ourselves globally. The event is also being announced 15 weeks in advance as a lot is expected out of it.

Kiran Mazumdar Shaw, Biocon CMD and Chairperson, Karnataka Vision Group on Biotechnology, who was present at the curtain-raiser, lauded the initiative while Infosys Co-founder and Executive Vice Chairman Kris Gopalakrishnan said that such a joint event was the need of the hour.

Shaw said it was time to recognise the convergence in the field of technology as the boundaries between BT and IT were getting blurred. Appreciating the move, she said.

Biotech needs big data science. We are in such a stage as we will not be able to move the needle without IT. The idea of a mega event is certainly ahead of the curve. I guess, even globally, this is a first.

Kris said the new idea would lead to new business opportunities. Appreciating the role of the government, he said that as there were so many different verticals, only the government could put all of this under one roof. He added,

Technology is changing rapidly. We are at a turning point and the future belongs to a new form of computing which is machine learning. IT is the solution for inclusion, poverty, pollution, and climate change.

Mindtree Chairman Krishnakumar Natarajan, who heads the sub-group, lauded the decision to combine the two events as visionary and far-reaching.

It is the time for reinvention of IT companies and these are exciting times ahead. New tech like blockchain, AR, VR, big data, AVGC, would be discussed and debated while BT would be on two threads. One would get into horticulture, animal husbandry, health and marine sciences, while the other would deal with oncology, rare diseases, and drugs.

Both the events will be co-located at the same venue, ie the Bangalore Palace and the common theme will be ‘Ideate, Innovate and Invent.’

Priyank said the focus this year would be on startups,

There are 7,000 startups in Bengaluru and the city has earned a reputation for itself as being among the top five cities with a congenial ecosystem for such original ideas. Last year, as the theme was ‘Define The Next’, the government wanted to bring ITE.biz out of the shell of the service industry and focus on R&D, innovation, products, etc. As part of Define The Next, we decided to establish several centres of excellence in Aerospace, AVCG, IoT, Digital City, Big Data and established the Bengaluru Bioinnovation Centre.

I am happy to announce that the Rs 248 crore Centre of Excellence for Aerospace has started functioning from July 17. It was set to train 50 aerospace engineers but we ended up with more than 150 applications. The centre expects to train 1,600 engineers by the end of the next year and by then we are looking at increasing the intake.

Priyank said the government is keen to take any technology to the next level as it does not want emerging technologies to die. As an example, he said at a recent conference at IISC that not much headway was being made with respect to grapheme, the next big thing in structures. Consequently, the state government moved fast and within a week it was in talks with a UK university for establishing an R&D centre, said the minister.

Graphene is an allotrope of carbon in the form of a 2D atomic-scale hexagonal lattice. It is the basic structural element of other allotropes such as graphite, charcoal, carbon nanotubes.

Stressing that there would be a focus on startups, he said that Karnataka was the only state that has been funding startups in agriculture to aerospace. He reiterated that the government had already funded 80 startups with up to Rs 50 lakh each which included startups run by women. Biotech, agriculture, tourism and a mixture of other bright ideas have been funded. He added,

We want less number of startups to fail. Even if we reduce it by five percent, it would be a great achievement. Keeping this in mind, the state has started Elevate 100 where a hundred startups from across Karnataka would be identified and helped to scale them quickly. We have already received 1,500 applications for Elevate 100 event that is being held in the last week of August and of them 350 are rural startups. We can validate their ideas and quickly help commercialise their technology.

The government is working with various foreign governments and consulates. While there was a bridge between Bengaluru and Boston as well as Netherlands, this year, a Karnataka-Israel corridor that will benefit both is being planned.

IT, BT and S&T Principal Secretary Gaurav Gupta said this edition will be the 20th edition of the IT event. “We have many international leaders and global speakers gracing the event. The event offers wider opportunities to leverage and benefit from both IT and BT, display important linkages and synergies.”

Shailendra Kumar Tyagi, Director, STPI, Bengaluru, said his organisation was proud to co-host this mega event, adding that the annual awards for IT achievers will be given away at the event.