An eye on the future, Indian startups & companies keen to work towards sustainability 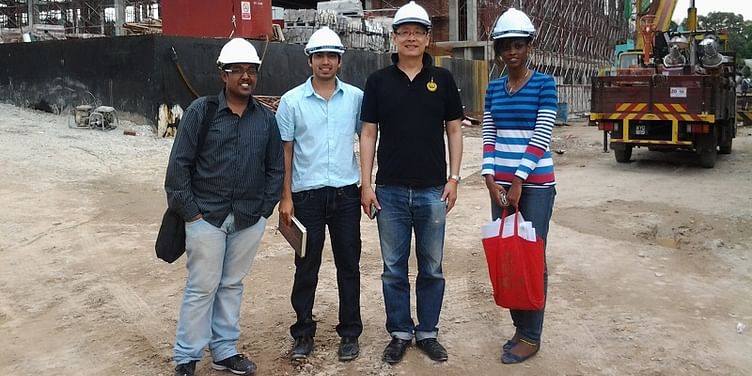 India is ranked 117 of 157 countries on the 2017 Sustainable Development Goals Index, trailing behind Nepal, Iran, Sri Lanka, and Bhutan. It is time startups show the way towards sustainability in collaboration with corporates.

Rohan Shenoy and Puja Aarti are sweating it out in the barren lands of North Bengaluru. They are working with builders to create sustainable housing. Their toil as architects and founders of BuildInn (formerly Crush Mango) is met with little interest from legacy builders.

But it has fortunately ignited a lot of young minds and the duo has been asked to build and manage sustainable housing and commercial projects. Their work garnered the attention of the Ministry of Road Transport, Shipping and Highways recently, which called them to apply for a pan-India design competition for toll booths made with sustainable materials and powered by solar energy. Hundreds of designs came in, BuildInn’s solar-powered toll plaza won the second prize and were one of only three startups that were selected nationally to execute sustainable projects. The winners were Nele Architecture and the third prize went to Designer's Aclove. The three company's designs are now being built in Akhepura and Mithoon in Rajasthan.

Rohan, the Co-founder of BuildInn, says: “This particular highway toll will reduce traffic jams in toll areas and reduce the carbon footprint. Technology companies will be involved in tracking vehicles and all this will be powered by solar energy.”

The startup has gone on to design hospitals, a school, a recreational centre, and mineral water units for the state government, all incorporating sustainability.

The importance of sustainability can’t be stressed enough.

But Rohan says to be sustainable one must have knowledge of design and go back to nature.

Yet we are far from being sustainable.

The role of the social entrepreneur

While some blame the lack of project execution on corruption, bureaucracy, and politics, there are those who link India’s problems with the lack of empathy in the minds of its own citizens.

Harish Hande, Founder of Selco Solar, says: “The 700 million poor subsidise the 300 million middle class and the divide is only widening.”

He says most companies and startups are not creating systems that can change people’s lives. “Just building a sustainable product and selling it does not create an inclusive society,” Hande says.

To illustrate this with an example, SELCO made solar lamps that could power rural homes, without electricity, for four to five hours. The beauty is that these lamps could be charged in government schools. Why did SELCO do this? So children would be sent to school to get the solar lamp charged and end up attending school. Back home, the light would dispel darkness and also allow children to study.

SELCO India now has 500,000 people using their products, which are designed after understanding the behaviours of people of specific regions.

The way ahead: Sustainability

Monto Mani, Professor at the Centre for Sustainable Technologies and Centre for Product Design and Manufacturing, says: “Sustainability is many things. But there can never be sustainability in a consumerist economy. There will be gaps between lifestyle and livelihood, efficiency, and effectiveness.” He says apart from urbanisation there are issues such as water usage, and collection and recycling of garbage that people must address. “However we have not yet identified ways to address the myriad problems in modern urban systems.”

For India to address the topic of sustainability, Monto says all governments, citizens, corporates, and institutions must collaborate to make society inclusive.

Sustainability is often confused with protecting the environment. But it also includes social and economic sustainability.

According to the UN, sustainability is “development that meets the needs of the present without compromising the ability of future generations to meet their own needs.”

The role of technology

Companies like Bosch, Continental, Volvo and others are trying to meet those goals with the help of technology.

At the proving grounds of Bosch GmbH in Boxberg, the company is testing over 30 cars and readying them for the future of mobility, which is automated, connected and electrified. They are even showcasing 48-volt hybrid batteries that can power scooters and small vehicles.

Bosch is all set to reduce fuel emissions to 95 grams per kilometre by 2021.

“Software is the future and processors will make cars consume less fuel. Hybrid and battery technology will become popular by the end of the next decade.”

The products developed by Bosch are for several automobile OEMs they work with.

Everyone has a plan for a sustainable future and so does Volvo, which is betting on smart cities.

Niklas Gustaffson, Chairman of Volvo India, is also Volvo’s Chief Sustainability Officer. “If you want to think of the future you cannot think about building a road. It includes everything from citizen behaviour to new mobility technologies to the relationship with the environment,” he says.

Collaboration is the future

Volvo has joined hands with 15 stakeholders in Gothenburg and built an electric bus service. This 8-km line has 10 buses plying on it and recognises sustainability from buildings to buses.

“The future of sustainability is in collaboration. It is no longer about the individual or one company. Everyone is responsible for making lives better,” Niklas says.

Autodesk, which makes software for the construction industry, recently held a discussion around design and sustainability.

Autodesk India Managing Director Pradeep Nair believes that if an engineer is building a product, sustainability must be at the heart of it.

“There are several problems in today's world. But if engineers can collaborate and combine knowledge from several sources to design cost-effective solutions, inclusivity will become the norm,” he says.

However, nothing can be complete without the role of the government.

Dr S S Krishnan, Advisor, Energy Efficiency, Energy Policy and Sustainability Program with Center for Study of Science, Technology and Policy (CSTEP), says: “Local governments must be sensitised to the many laws that exist to promote sustainability.”

To elucidate, he says India has set in motion the Indian Buildings Energy Conservation Code, which outlines sustainability - from materials to be used to how building plans have to be implemented and evaluated by local governments.

“Local governments know such a code exists but do not adhere to it. Until the local municipal corporations take ownership of changing lives, there will be no sustainability in cities,” he says.

In a decade, migration to urban centres will become steep. According to the United Nations Habitat for a Better Urban Future, there will be 30 mega cities in the future with more than 10 million inhabitants.

Companies like Volvo are already pushing the use of software technologies to achieve Sustainable Development Goals (SDGs). Their focus is reducing fatalities on the road, fueling innovation to build sustainable infrastructure, creating sustainable cities and addressing climate change.

Clearly, it’s the time to collaborate. No individual can say, “I did my part to save the world”. If startups like BuildInn can show the way, can’t corporates, startups, SMBs, governments and other institutions work together to help India break into the top echelons of the HDI and SDGI?

GOAL 3: Good Health and Well Being

GOAL 17: Partnerships to achieve the Goal