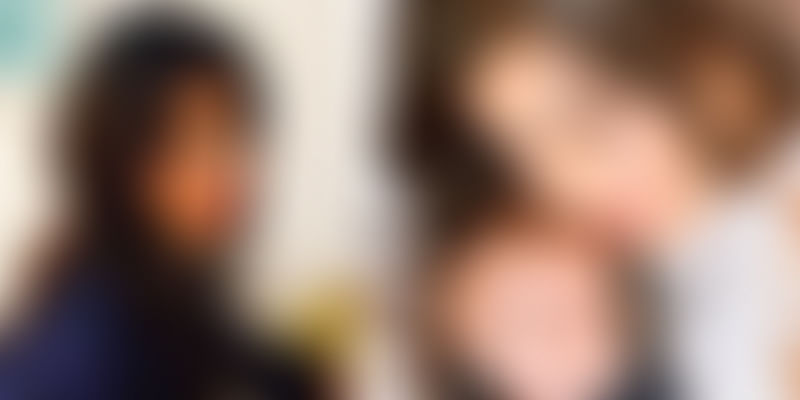 She served up everything from coffee to bills to become one of the world's topmost women in the all-boys-club that is the diamond industry — only to startup what is today Asia's fastest-growing health and wellness platform, Healthhunt.

Behind the condescending catchphrase, 'diamonds are a woman’s best friend', lies a ludicrous paradox: for the diamond industry behind the scenes isn’t a woman’s best friend at all. In the industry that constantly second-guesses the few women who do manage to best the conundrum, Pooja Sachin Duggal truly embodied the essence of diamonds to rise above the ranks.

She lowered herself in the metaphorical mines of the male-dominated industry to get her hands dirty, allowed herself to be honed for a decade, and, sure enough, shone amongst the brightest in the global diamond industry.

However, 11 years into running the Indian arm of the Rapaport Group, one of the largest diamond trading companies in the world where she helped shape policies relating to the diamond trading of various countries, here’s why Pooja Sachin Duggal gave it all up, in the pursuit of health and happiness.

Pooja graduated from the HR College of Commerce and Economics (specialising in marketing), and then went on to study diamonds at the Gemological Institute of America in California. Determined to ‘play with diamonds,’ before entering the corporate side of the industry, she joined a local diamond laboratory, and came out a confident diamond grader at the other end of the year.

She then moved on to Rapaport, the world's foremost authority in diamond pricing, where she started off as an intern, and did the dance every fresher has – serving up everything from bills to coffees.

Slowly and strategically, Pooja started to become a part of every department, filling in for whatever was needed. “This worked in my favour, as I then became the go-to person for all matters, without discrimination. The company had launched many new initiatives then, related to rough and polished diamond auctions, jewellery, and the making of the first ever, and now the world's largest diamond trading platform, Rapnet."

One thing led to another, and the entire project for the Indian market came to Pooja. She was asked to become the director of the company in a matter of three years, and MD in five, and went on to spend 11 years with Rapaport.

At 26, being one of the top five women in the global diamond industry can be a bit overwhelming. “There were hardly any women in leading positions globally. My ‘well-wishers’ told me that the business was cut-throat and, therefore, no place for the fairer gender. The industry, to a large extent, lacks meritocracy and the reigns are normally handed down to the next generation within the family,” she reveals.

READ ALSO: Rajeswari Vaidyanathan built her corporate kingdom just to tear it down, to follow her dancing heart at 36

In one of her initial roles as a diamond buyer, her vendors would often misquote diamond prices to her assuming she cannot possibly be savvy about prices or quality as a woman. “Parcels that ranged from $1,400 a carat were quoted to me at $3,000 a carat. Over the years, I learnt that being confident, being comfortable with one's own knowledge and abilities, and not letting people's assumptions determine your success is very important, to be able to grow,” she says.

As time progressed, Pooja came to work very closely with the pricing team to help create the global price index for polished diamonds. She even dealt with the Ministry of Finance for diamond trading policies in India, ensuring diamonds worth billions of dollars moved in and out of India immaculately, on a year-on-year basis.

One of her most thrilling experiences was spearheading a raid of a large American diamond and jewellery trading company for Rapaport, on behalf of a bank. “It felt unreal, almost like I was in a movie,” she recalls.

But while the end seemed sparklingly clear, something changed the course of her journey completely. As blood diamonds started making inroads into India, she made the courageous move of stepping down from her executive position in order to take a stand against this immoral trade.

After 11 years, even though she had begun to feel the burn, it was her dedication to yoga and healthy eating that kept her going as the youngest non-male member of the senior team at Rapaport. So, while diamonds remained her first love, her interest found itself secretly gravitating towards health and wellness.

“As clichéd as it may sound, I just wanted to make an impact on the world around me,” she says. Interestingly enough, another major event of her life coincided with this massive decision to fly – she was pregnant with her first child. Soon though, she realised that the two decisions, rather than being at loggerheads with each other, can actually complement each other.

“Pregnancy isn’t really the handicap people make it out to be. It’s only made me stronger,” she quips. Pooja used the nine months to sit back and focus on groundwork, user acquisition, strategy, how to harness artificial intelligence (AI), and what their product roadmap will look like.

Pooja learnt to be ruthless with her time. “In the last trimester of pregnancy, this was probably the most important bridge to the team – the idea of 30-minute daily calls and one-hour weekly calls that shaped the agenda, the results, and ultimately, our progress,” she says.

Discovering that nothing of significance exists in the health and wellness space for companies to offer to their employees that is young, fun, actionable, and actually engaging, Pooja incepted Healthhunt, which offers a four-step holistic solution across small and large companies. “We are already delivering till Step 2, and have very exciting plans ahead!” she states.

Since the content space tends to be cluttered and highbrow in the wellness space, Pooja’s strategy was to provide short format, punchy, and actionable content, so that anyone can apply it in their daily lives and kickstart their daily well-being practice. Going forward, they will be offering customised wellness programmes to organisations of all sizes.

Using AI and machine learning to create better reading lists based on one’s activity on the site, Healthhunt takes stock of the frequently searched topics on Google and its own site to decide on what topics to focus on next. And since they wanted their content to be actionable, they integrated a marketplace. “Being a content-led marketplace, we match products to seamlessly fall inside articles that are most relevant. We have already partnered with over 100 brands, and have very exciting opportunities for them in the near future, as we go into Stage 3 of Healthhunt,” she says.

Pooja believes that they are one of the fastest growing websites across Southeast Asia in the health and wellness space. The young entity has already raised a small angel round from SD Squared Ventures, and is gearing up to incorporate a multi-tenancy domain-sharing service for content, and also expand their health council base to include more experts on board for their corporate training partnerships.