'The journey was long, but it was good,' says Ratna Prabha 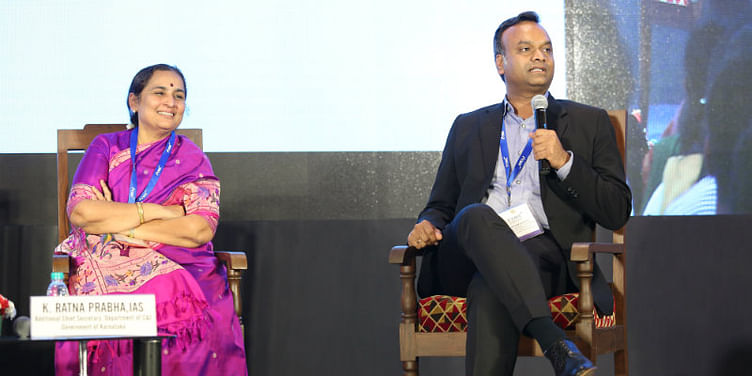 Women in power, especially those who have become successful through years of hard work are always asked questions about their journey and challenges. And invariably one presumes that their lives must have been full of struggles.

But what happens when a woman in power reveals her life was not as stressful as it seemed?

Ratna Prabha, Additional Chief Secretary to the Government of Karnataka, in a fireside chat at ELEVATE 100, in Bengaluru on Wednesday, spoke about her journey over the years.

With over 36 years of experience as a civil servant who’s worked extensively in the IT industry, promotions, e-governance and social sector, Ratna has led from the front to bring about a social change. In addition, her transparent public administration style brought visibility to the IT industry in the state.

In 1999 and 2000, she received the ‘Woman of the Year’ award from the American Biographical Institute Inc, USA.

Shaili Chopra of Shethepeople.tv anchored the discussion and asked Ratna about her initial struggles. Ratna said, “Even though the journey has been long, it has always been good. I have been fortunate that both my parents were educated, my father was a civil servant and my mother a leading doctor. I come from a family where all are treated as equals.”

Ratna who was an IAS probationer in Belgaum district shared her personal experiences from that stint. She was often not recognised as an IAS officer because of her appearance.

Ratna said, "I have a simple sense of style and so people often mistook me for a housewife or a typist, rather than an IAS officer. It did not matter to me but I felt proud that I looked like other women. This has made my journey comfortable in the sense that I had no struggles."

She also emphasised on the need for society to evolve and mindsets to change.

She mentioned the Mahila Uddhyama Vahini initiative and the Special Women’s Tech Parks coming up in Hubli, Dharwad, Mysore, Bellary, and Gulbarga that will take the cause of women forward.

“You (women) are tomorrow’s leaders, entrepreneurs, visionaries, artists, and influencers. Change-agents with a rebel yell, though in gentle voices. Although it’s far from perfect, it’s never been a better time to be a woman in this country,” Ratna added.

Besides sharing stories from her vast experience, she also requested the media to support SMEs and women entrepreneurs.

Ratna said, “While there are various initiatives set up for women, but when funds are allotted, women entrepreneurs are not given priority, and hence there is a need to recognise and support them”.

When asked if there is a women entrepreneur-specific arrangement, she said, “Women need to compete with men and not look out for arrangements. However, there are various provisions by the government for SMEs.”

Priyank Kharge, Minister of State for IT, BT & Tourism offered his support and highlighted access to 10 crores of government funding for women entrepreneurs through the Start Up Cell. In an encouraging comment, he also mentioned that the Government is trying to formulate a policy where a part of the Government’s procurement of products and services can be given to startups.

Ratna also informed the audience that she was currently writing a book on the initial years of her service and more details of her journey could be found there.