A walk through Amazon India’s largest fulfilment centre in Hyderabad 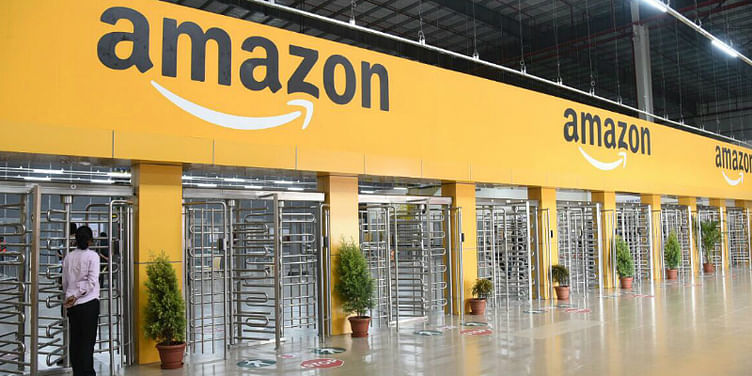 Amazon India recently inaugurated its fifth Fulfilment Centre in Telangana to widen its reach and also prepare for the upcoming festive season. YourStory takes you on a tour of the Fulfilment Centre and gives an inside view of what happens when Amazon Prime customers hit the ‘Buy Now’ button.

It was early afternoon. A group of about 15 journalists huddled up and listened to a safety instruction demo just before being ushered in for a ‘behind-the-scenes experience’ at Amazon India’s new Fulfilment Centre (FC) in Hyderabad. I was excited and annoyed at the same time. Excited because I would finally get to see what actually happens behind the scenes when one places an order as an Amazon Prime customer.

I was annoyed because as a millennial who likes to lifelog experiences, I wouldn’t be able to live tweet or shoot an Instagram or Snapchat story, as smartphones, as well as cameras, were prohibited inside.

“I’m going to be talking in my FC voice…” bellowed Akhil Saxena, Vice President, India Customer Fulfilment, Amazon India, as he began the tour. He explained that his ‘FC voice’ is a more authoritative version of his regular voice to get the FC staff to pay attention. It is also louder than usual so as to be heard over the din of people and machines on the shop floor.

Over the next 45 minutes, we were given a quick tour of the inventory management at the 400,000 sqft FC, which has close to 2.1 million cubic ft of storage space. The centre, situated in Shamshabad, near Hyderabad, is the fifth in Telangana and the largest in India. Here are some highlights from the tour and media briefing.

From 1 to 41 Fulfilment Centres in four years

Before our smartphones were ‘snatched away’, we were seated in the main hall where we waited for the more formal session of the day to begin. Telangana's Minister of IT, Municipal Administration & Urban Development, Industries & Commerce, Public Enterprises, Sugar, Mines & Geology, NRI Affairs KT Rama Rao was expected to grace the occasion, but he couldn’t make it to the launch because of a personal emergency. He tweeted about the launch though and issued a statement, which said,

Amazon India’s latest investment with the launch of their fifth Fulfilment Centre in Telangana, here in Shamshabad, evidently signifies the growing interest of large global enterprises in the state. The FC will enable thousands of small and medium businesses selling locally created products such as apparel, handlooms and handicrafts to service customers seamlessly across the country and the globe. It will also fuel the growth of ancillary businesses such as packaging, transportation, logistics, and hospitality across the state. We are committed to enabling the ease of doing business and enabling companies like Amazon.in to expand their presence in Telangana.

Addressing the gathering, Akhil noted that Amazon’s vision from day one had been to transform the way India buys and sells and that the company saw both buyers and sellers as its key customers. Looking back at Amazon India’s journey over the last four years, he remarked,

He informed that the new FC was the first in India to be ‘built to specification’. It has been built by GMR as per specifications by Amazon India. Akhil explained that it had taken six months to build this FC because of its sheer size and the complexity of its design.

While taking us towards the truck loading docks, Akhil noted that 90 percent of sellers on Amazon use the company’s fulfilment services. When using FBA, sellers across India send their products to one of Amazon’s FCs for storage. Once an order is placed, Amazon locates the product in their FCs, and then proceeds to pick, pack and ship the order to the customer. It provides last-mile customer service and also manages returns on behalf of the sellers.

Here is a step-by-step description of what happens at a FC from the point of view of both sellers and end-customers:

Step 1: Booking an appointment for the inventory and truck

Whenever a FBA-approved Amazon seller has inventory that it wants Amazon to store in a FC, they need to go online and book an ‘appointment’ for the same. Based on availability Amazon assigns a time and a boarding dock number to the seller.

Amazon’s Hyderabad FC had 51 boarding docks and according to Akhil, about 1,000 trucks can be serviced on an average day. There are also different sized doors to cater to trucks of varied dimensions.

The shipment is placed at an unloading dock, stored there for some time and then moved to a receive line, where the outer protective packaging is removed. The actual inner packaging that the seller has for the product is left as is. But Amazon partners perform a six-sided quality check to ensure that the product has not been damaged during delivery. The products are then scanned and assigned unique bar codes.

Some products also go through a device called cubiscan, an automated dimension scanning equipment, which checks depth, width, height and weight of products. Amazon feeds this information in its database to help identify products, as and when needed when they are about to be shipped out of the facility.

Akhil informed that Amazon follows the FIFO (first in first out) principle for inventory management.

Step 3: Storing in shelves akin to a library

Once incoming products have been inspected and individual bar codes assigned to them, they are then stored on shelves. This ensures that products can be easily and swiftly accessed when an order is placed for them.

Akhil explained that Amazon doesn’t store similar products together like in a supermarket, but instead ‘marries’ products to different locations like in a library.This seems to go well with Amazon’s strategy of FIFO.

Whenever an order is placed by customers, an Amazon partner uses a modified bar code scanner to identify products kept in shelves in the storage aisles and loads them on a cart for final packing.

While we were observing the process, someone shouted ‘Corner’ just when another employee passed through the storage aisle next to us with a cart. Akhil explained that this was part of the safety training guidelines to ensure there are no collisions between employees at sharp corners.

He directed our attention towards a fire sprinkler right above our heads even as he informed that the FC had about 15,000 fire sprinklers to deal with fire emergencies.

Products undergo a final six-sided quality control check before they are sealed with black Amazon Prime tapes. Then invoices are attached to the packages. Akhil pointed out that Amazon makes it a point to fold invoice in such a manner as to protect privacy and ensure that order details cannot be seen from the outside.

The Hyderabad FC employs 34 specially abled employees, in partnership with Youth for Jobs Foundation, for folding the invoices. A supervisor guides this team and is responsible for evacuating them quickly in case of emergencies.

The packages then go through one final round of checks where their weights are matched with the standard weight captured by the cubiscan. This serves as a final verification step to ensure the right products have been placed in the right packages. They are then placed on a central 1.6 km-long conveyor belt which takes them to the outgoing trucks.

Is fulfilment by Amazon akin to a physical version of AWS?

While Amazon’s setup in Hyderabad is impressive indeed, Akhil said that compared to the West and markets like China, there is still room for improvement here in terms of warehouse management and logistics. He remarked that the middle-mile and last-mile experience can be improved further and with GST being implemented, the interstate movement of goods are likely to become simpler.

Here is a quick overview of one of Amazon's Fulfilment centre in the US, circa 2013, for the sake of comparison.

Amazon India’s FCs work on a ‘pay per use model’ and their sellers have the flexibility to decide how much of their inventory they want Amazon to fulfil the last-mile experience and how much they want to ship themselves. The FCs ensure that Amazon Prime customers get prioritised deliveries.

The FBA also has a scale-as-you-go model with different price plans for small, standard sized and bulky items. This can be likened to Amazon’s other service, Amazon Web Services, which provides cloud services for smaller companies to ramp up their capabilities without investing in physical infrastructure.

A Wired report made this comparison and also noted how in the past, sellers worried about competing with companies like Amazon. But by opening its FCs Amazon India is offering small and medium businesses access to an infrastructure and scale they cannot replicate on their own. The report noted, “In many ways, Fulfillment by Amazon (FBA) is like a physical version of AWS.”

According to Akhil, Amazon currently has about 10,000 sellers in Telangana, and the selection offered by these sellers for immediate delivery has grown more than 120 percent in 2017 as compared to last year. He remarked,

The Fulfilment Centre will enable sellers to use local infrastructure, save capital and help them grow their businesses… Our FC will work closely with local communities, create numerous skilling and employment opportunities for thousands of youth.

With the festive season around the corner, Amazon India is looking to ramp up storage capacity for its annual war against other ecommerce players like Flipkart. The other objective is to facilitate 2X growth of sellers in Telangana and also improve the end customer experience by fulfilling orders across India faster.

*This story was updated to include the correct number of states that Amazon India's fulfilment centres are present in.