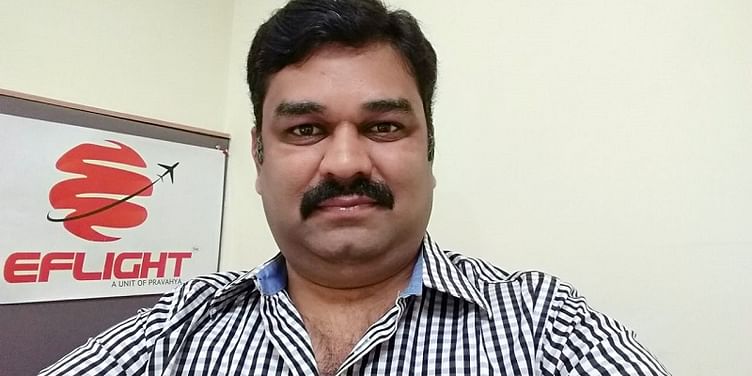 Set up in 2015, Eflight is India’s top trip support company for business aviation. The startup handles 40 clients across India, with an average of 150 flights a day for the country’s jet set.

They say money comes to those who happen to observe the world go by and quietly notice opportunities that can become big businesses. This was what 42-year-old Prem Kumar did for over a decade at HAL Airport in Bengaluru. His job as air traffic controller led him to observe 36,000 hours of private flights (jets, pre-cooled jets, and turbine-powered ones) landing in the IT City. He observed the rich, the powerful and the famous land and get into their fancy sedans and become a part of the hustle-bustle of Bengaluru.

And that gave wings to his entrepreneurial aspirations.

The job of a pilot of a private jet, unlike one in a commercial aircraft, is never ending. S/he must manage agents who get permissions to land/fly, garner military clearances, ensure payment of dues in an airport, give notice to airmen at the destination, plan routes, plan hotels for the crew, and finally arrange transportation to the hotel.

What if all these tasks and duties could come together in one single app and make the pilot the king of the sky? That is what Prem Kumar and war veteran Captain AK Sachdev (retired) have brought on board with their company EFlight.

The private plane flight planning industry has till now been dominated by Honeywell, Rocket Routes, Nav Blue and Skyplan. All these companies charge Indian entrepreneurs a global corporate plan; none of them have an India-only plan. Since only 30 percent of privately owned aircraft fly overseas from India, the remaining entrepreneurs have no way of buying plans from these global companies.

Prem Kumar, Founder and CEO of Eflight, says, “Corporate folks have to pay a lot of money for global plans, which also include India as part of the package, and it is expensive. So, we tailored the business for India.”

Eflight was founded in 2015, but the idea of starting a company had been on Prem Kumar’s mind since 2012.

“I had met a lot of entrepreneurs and their pilots would often tell me about the problems in handling the entire trip for their clients,” he says.

There are 450 private planes in India; all of them require support across India. The industry, however, is very fragmented in handling operations.

However, despite the idea, Prem stayed put as he did not have the right partner to kick-start the business. He needed support from a person who understood the value of the industry.

In 2014, he visited several aviation exhibitions in Bengaluru and ran into Captain AK Sachdev, who loved his idea. Sachdev, a former Airforce pilot, had been the COO of Go Air for five years.

Together, the duo decided to get this business off the ground. The company was born in mid-2015 and it took them a good year to get the product right.

Two years later, they handle 40 clients across India, manage an average of 150 flights a day, and have become the planner for pilots of private planes.

Their work became so popular that they got the attention of Airbus, which picked them for their accelerator programme in Bengaluru and has now given them a corporate deal with its flight planning company NavBlue.

Bruno Gutierres, Head of BizLab, says: “Finding this startup that understands the digital needs of Airbus has been a real pleasure in the second season of the accelerator programme.”

Eflight’s first client was TVS and it added 39 more clients by the end of March 2017. But why is this platform important?

If one travelled in private jets, pilots would carry at least Rs 5 lakh in cash to pay agents and airports for clearances. Carrying cash is a problem as the operations distract the pilot and tend to be strenuous. It is also a security risk.

The Eflight plan makes everything digital. The startup handles all processes for the pilot and sends him a dashboard of itineraries and reminders of all clearances on a smartphone. Over time, it helps bring down the cost of all operations by a third.

The intuitive, web-based tool assesses weather conditions, generates flight routes and files flight plans online from any internet-connected device to all airports in India. It helps simplify and automate the flight planning process to make flying safer and easier on the private plane’s pilot.

“This was a genuine problem in the industry that no one had addressed. The client saves money and also plan trips without any hiccups,” Sachdev says.

V Ganapathy, CEO of Axilor Ventures, says: “Any startup must find paying customers and understand the market opportunity to scale up.”

A trip to the Jakkur, Hosur or HAL Airports reveals both founders talking to pilots all the time. The company has invested its own money of Rs 50 lakh and generated more than Rs 6.4 crore in revenues. With Nav Blue on board, it expects to grow manifold over the next two years as they will also serve global corporates for Indian routes.

Prem Kumar and Sachdev seem to have hit a gold mine. They need to dig deep to tap the fact that they have the first mover advantage in the Indian industry and their competition is a fragmented array of agents across the country.

Clearly, this Bengaluru-based startup is a classic example of how one can work in a company and notice how certain processes can become business opportunities.

Prem found his and was ably supported by his partner. Together, they’re working to keep Eflight flying high.