Resurrecting the magic of storytelling, this 22-year-old is on her way to bring back the good times 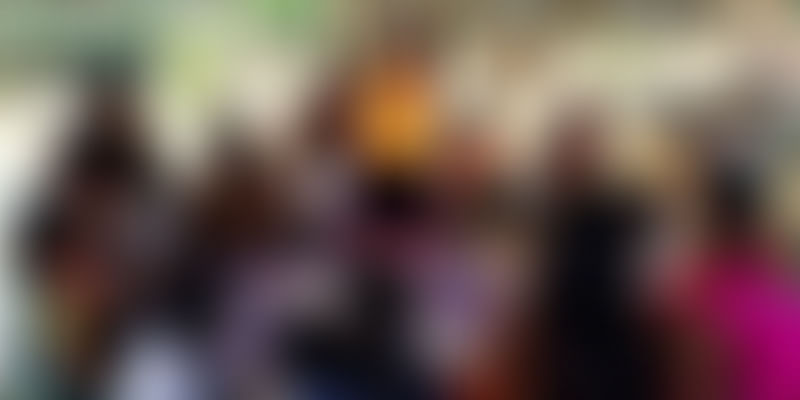 By putting together the act of storytelling in open lush green spaces, Smrthi Harits is bringing back the times when fresh air and a strong sense of imagination was considered fun.

Stories awaken our ability to dream, imagine, and visualise. They take us back to timeless legends, myths and real-life incidents, making us feel varied emotions, imagine different lives. Undeniably, they are how we make sense of and give meaning to this rather confusing life.

There was a time when human interaction transcended technology, children were more engaged in outdoor activities — and there were many exciting stories to share.

Sadly, today, technology is the norm and children have turned into couch potatoes. In the process, they have also lost the deep connection with their immediate family and friends — a connection that can be revived with the power of conversation.

An effort to revive a love for stories

22-year-old Smrthi Harits, a recent graduate with a degree in telecommunication engineering from Bengaluru, chose to work in the non-profit sector. She joined The Nudge Foundation, an NGO working towards sustainable poverty alleviation in the country.

Growing up in a joint family listening to her grandmother’s stories, Smrthi shares how she used to wait for power cuts so that the entire family could get together and play games like chowka bara and pagade.

Years later, she realised that this excitement wasn’t there anymore. “My introduction to mathematics and several life lessons happened through games and stories. I realised that today's generation of kids are missing out on an important part of growing up. Stories, outdoor games, traditional board games we grew up playing have been replaced by playstations and mobile phones.”

To revive this long-lost practice of storytelling and bring about change, Smrthi started Kagakka Gubakka.

“Traditionally, culture and heritage is passed on by grandparents to grandchildren. In an urban city like Bengaluru, where nuclear families are on the rise, children do not get the upbringing we all took for granted in our days,” she says.

Drawing attention to another sad situation, she adds, “We learnt through stories and scraped knees. Unfortunately, today's children neither have safe public spaces nor company to play with. They are stuck to their video games and mobile phones.”

Through the initiative of Kagakka Gubakka, the aim is to teach children the rich culture and tradition of our country with the help of storytelling. It is also an attempt to keep alive folk games with a hope that they survive the test of time.

A strong resolve in tough times

Kagakka Gubakka is a series of witty tales in Kannada about a sparrow who outsmarts a conniving crow; Smrthi recalls why she chose the name. “I grew up listening to these folk stories from my grandmother. Years later, I tried looking for them and understood that they were part of an oral tradition and were never documented.” Though she remembers just a couple of the stories, to keep the tradition alive, Smrthi chose to call her initiative Kagakka Gubakka and hopes to document many such stories.

It all started when Smrthi put up a post in the Facebook group of her neighbourhood, bouncing off the idea of a weekly meetup to narrate stories to kids and get them play folk games. Initially, the idea was well-received and several members expressed interest in bringing their kids to the free meetup. “We started out at a park in Malleshwaram and held our first meetup in July 2016,” says Smrthi.

Sadly, on the day of the first meetup, none of the parents who had responded on Facebook turned up. Smrthi waited for half an hour and just when she was about to leave, she noticed a bunch of kids from the neighbouring construction site, playing outside the park. “I called the kids and told them that I'd teach them new games if they listened to the stories. They were our most loyal audience for the next six months,” she shares.

As time passed, some of the parents who attended later sessions did not like their children mingling with the kids from the construction site for hygiene reasons. They discontinued but Smrthi kept on with Kagakka Gubakka sessions with and for these children. After six months, the children left for their village and Kagakka Gubakka moved to its next location, Sankey tank, a manmade lake in the city with a beautiful space for children to play. This helped Kagakka Gubakka reach out to a larger audience.

Growing from strength to strength

Today, Kagakka Gubakka is a free monthly meetup that has grown from a bunch of six kids to a tribe of over 500 and has three chapters running at locations in Malleshwaram, Basavangudi, and Rajarajeshwari Nagar of the city.

Besides, there has been a significant transformation in the children. “Some of the kids, who were shy and introverted when they first came, now wait for Kagakka Gubakka meetups. Parents have come back and told me that their children have taught all the other kids in school the games they learnt at Kagakka Gubakka. They not only remember every story that they've heard but have also created their own stories at some of our meetups. They now have new superheroes — the witty Tenali Rama and the charming Krishna,” says a joyful Smrthi.

Each two-hour session every month has three stories. One from mythology, another from Tenali Rama or Akbar Birbal, and one story with a moral value taken from Panchatantra or Hitopadesha. Sometimes objects are passed around and the children are asked to weave stories around them. If there's a festival around the corner, Kagakka Gubakka also includes stories on why and how the festival came to be celebrated. “We’re losing touch with our festivals because no one celebrates them the old way anymore. We don’t want a festival to become just another holiday,” Smrthi remarks.

Sessions are conducted both in English and Kannada, and there are three other members who help Smrthi. Sudha, a parent; Shaila, a grandparent; and Shrikanth, Smrthi’s fiancé, manage the meetups. They post regular updates on the date and venue for the next session on their Facebook page and send monthly newsletters to the parents who've subscribed to their website. “We have also started seeing a lot of senior citizens, like retired teachers, coming to our sessions to share stories. Since we hold these sessions in parks, the once neglected parks are coming back to life. People are interested in conserving and demanding better upkeep from authorities,” says Smrthi.

To expand goodness to other cities

She tells that Kagakka Gubakka is exploring new locations and cities to start similar meetups. “Most of this happens through collaboration. There are several parents helping us take this ahead. We want to localise the meetups as much as possible as this will also help children make friends in their neighbourhood.”

The highlight of each session are the folk games that kids play at the end. Games like cow and the tiger, kho kho, kabadi and lagori makes them keep coming back. Therefore, the team's next plan is to put Indian games on global map. “What is popularly known as Ludo is a game that has its origin in India. It is a modern version of the game of dice played in the Mahabharata. There are several such Indian games which fortunately still haven't been patented by the West. We hope to bring back some of these games and popularise them across the globe. We're in the merchandising phase for a couple of them.”