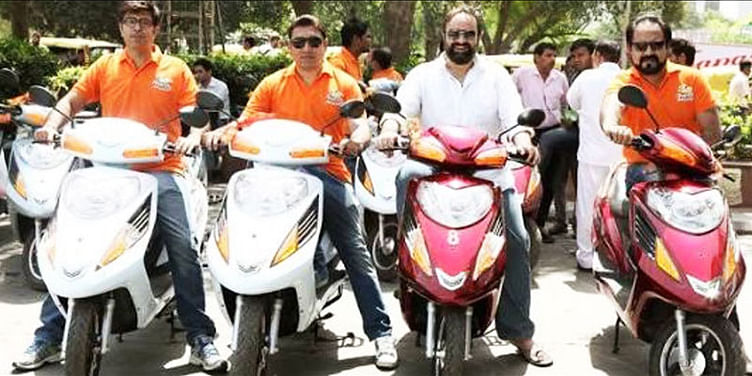 The company is on a mission to help the city fight air pollution and enable last-mile connectivity with its fleet of eco-friendly electric bikes. Focusing on the go-green concept, the brand has witnessed a five-fold revenue growth and completed 1.73 lakh rides so far.

According to a recent Greenpeace report listing the 20 most polluted cities in India, Delhi tops the chart with PM10 concentration of 268 micrograms per cubic metres. Numerous efforts have been taken from time to time by environmentalists as well as by the government to remove the tag of India’s most polluted city. In 2015, Delhi’s ruling AAP government launched the odd-even traffic rule to put a check on the city’s alarming traffic and pollution rate. However, Delhi residents, who were heavily dependent on private vehicles for last-mile connectivity, suffered. Taking a cue from the hassles faced during the initiative, three professionals embarked on a journey to bridge the last-mile connectivity gap with eco-friendly options, giving birth to Pillion Rides.

Initially launched as Prompto, Pillion Rides started its journey on April 2016 with a fleet of 20 battery-operated bikes and 25 riders. The brand’s co-founders, Nikhil Malik, Karan Chadha and Pawneesh Rampal, bring aboard business acumen and industry experience. Nikhil is a serial entrepreneur, who has founded businesses around manufacturing of machine components. Karan has earlier worked in the commodities sector and other organisations. Pawneesh has around 11 years in corporate finance and was associated with brands like Hero FinCorp and Yes Bank, among others.

Focused on providing last-mile connectivity, Pillion Rides is available for local commuters from bus stops, metro stations for a radius of five km and charges Rs five/km. Today, the brand has 40 bikes that operate from Delhi’s Karol Bagh and Jhandewalan areas, helping passengers commute locally in the city’s central and western areas. The brand has ordered 20 more bikes to start its operations from Chandni Chowk next week, taking the fleet size to 60 bikes.

“We initially faced the challenges of spreading awareness amongst the public about electric bikes, trying to change their mindsets of how they are safer and eco-friendly. We also faced an issue with changing their perception of shifting to such a mode of transport,” reveals Karan.

Contributing to Make in India and Skill India initiatives

Today, Pillion Rides is not only doing its bit to provide last-mile connectivity and decrease pollution issues, but it also lays significant emphasis on boosting government initiatives like Make in India and Skill India. For passenger rides, the brand uses Ampere electric vehicles, manufactured in Coimbatore. The eco-friendly startup is also contributing to the Skill India movement by creating job opportunities for the riders and would continue working on the city’s unemployment scenario with its robust expansion plans in future. The brand is also generating women employment and has a fair number of female riders working for the brand.

“With the first-mover advantage and the only affordable eco-friendly commuting option available on Delhi roads, we are a trendsetter and have zero competition in the market,” adds Nikhil.

With a strong focus on passenger safety, stringent background checks of riders are done and adequate safety training is provided before a rider takes on the road. Pillion Rides also offers a comprehensive insurance policy of upto Rs 1 lakh for drivers and commuters, protecting them during the travel.

Going ahead, the brand plans to expand its presence in Delhi, starting with Delhi University's North Campus next month, increasing the fleet size to 100 bikes, and is also eyeing two other cities for expansion.

“Two-wheelers are a popular mode of transport in Delhi and they are also a major cause of air pollution in the city. With our fleet of battery-operated bikes, we aim to bring down Delhi’s carbon emission rate significantly. One e-bike can help in cutting down up to one ton of carbon dioxide emission over three years,” adds Pawneesh.