Fighting for a greener city, these Bengaluru citizens are changing the game of waste management 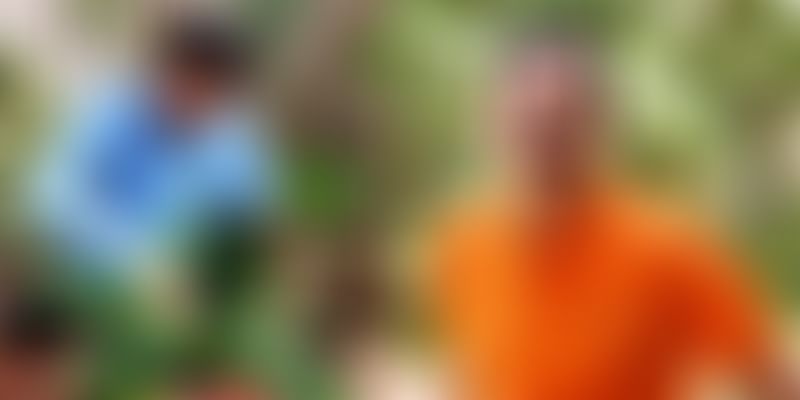 From using a composting tower to terracotta pots, these individuals tell us how to manage our waste while emphasising the personal responsibility every citizen has towards the environment.

Behind all the hustle, every city is slowly turning into a garbage dump. Proof lies in the nasty unending cycle of waste piling up at every nook and corner. Garbage, when burnt, pollutes the air we breathe; when thrown away into lakes, it pollutes the water we drink; when dumped into soil, it eventually makes its way back as poison to our plates.

However, every initiative carried out to change this sad scenario has one thing in common — it calls for collective action wherein each citizen realises his/her duty towards their city and the environment.

To bring about a positive change amidst the growing garbage menace in Bengaluru, there are individuals setting an example for others and drawing attention to an issue that requires immediate action.

You can make a difference

These citizens of Bengaluru believe that if segregation and composting of waste becomes an everyday affair, then waste management won’t be a difficult task to perform.

Rajam Sridharan (64) shares that when he and his wife moved into their home in 1998, they began raising flowering plants. However, they were unaware of composting until his sister-in-law made them realise how domestic wet waste can be put to use for the betterment of his plants.

He then began segregating and composting in his own small ways. A bigger progress was made after his daughter-in-law brought home a composting tower few months ago. “Soon, with the volume of wet waste that we generate, the volume of compost generated in turn was an immediate success,” says Rajam.

Explaining that the process is hassle-free, Rajam adds, “I was advised by well-meaning relatives that messy conditions could follow. But thankfully nothing like that has happened. Even my gardener agrees that the compost that comes out of the process is really good quality.”

According to Rajam, true transformation can happen if every citizen practised waste management despite the shortcomings in the system. “Two years ago, the BBMP sent circulars making it mandatory for all Bengaluru citizens to segregate domestic waste. We obliged, but to our dismay, we found the garbage getting dumped together right at the point of collection. If every citizen segregated the non-biodegradable waste and composted the rest, this could end.”

An everyday practice and a passion of a lifetime

Anil Nadig (40), Co-founder at Jivabhumi Agri Tech Team Ltd, a social venture connecting farmers and consumers via food is a passionate green entrepreneur. The number of green venture firms he runs today are born out of the love his family has towards mother nature.

Born in a tiny village near the town Hassan in Karnataka, Anil grew up in his maternal grandmother's thotada mane meaning farmhouse. Here, agriculture was the only way of life and Anil grew up seeing his uncles grow food, tend to cattle, and lead a simple life.

“My parents moved to Bengaluru to support my studies in the early 90s. It was a vibrant yet a simple and green city. I remember cycling to my school, playing cricket, and taking a dip in the many city lakes,” he remembers.

Living in a small rented house at first, the family missed having a garden, plucking flowers in the morning, and eating seasonal fruits. This was when Anil felt the urge to provide this for his family. When they moved into their own house in 2006, he made sure they had a big garden. Ever since then, they have been segregating and composting waste. “My mom used to follow the reduce, reuse and recycle principle. She had adopted the same model in our backyard that had a small pit where all the kitchen waste got dumped.”

Anil’s family follows a simple technique: all the dry waste gets to the local dry waste collection centre or is picked up by the kabadiwala, while the manure from the composting pit is taken out and spread into their garden. “I love this and call it the easy or lazy composting method. For anyone trying this method, I would suggest that they introduce natural bio agents to help break down the organic matter — a little bit of cow dung, sour butter milk or vermicompost will kick-start the process and then it usually runs on its own,” says Anil.

Anil has played an active role in the entire process since 2010. Elaborating on how simple it is, he explains, “The dry waste goes into a small bin. It is segregated as per simple guidelines. All electronic waste goes to the office where it is sent to the accredited electronic waste recyclers. Plastics mostly go to the local kabadiwala. Medical and sanitary waste is labelled and handed over to the local BBMP waste collection team. The rest, which is kitchen waste, is dumped into the composting pit. Every individual house with a small back or front yard can do this very effectively.”

The process reduces carbon footprint and the dependency on public infrastructure, leading to more resources for everyone. “Today the city is overrun with garbage. I happened to visit a few garbage dumps and the situation in and around the dump is horrible. If every citizen follows simple segregation and composting, we can regain the old glory of Bengaluru. It is so simple that even my son knows how to do it,” says Anil.

Segregation ensures that resources get recycled and reused effectively. Composting at home or within your community ensures recycling of nutrients and organic matter locally. Converting this into food in your own garden is like having your cake and eating it too.

Today, Anil’s garden is a living example that nature gives manifold, you just need the patience. They have a number of fruit trees and also many flowering plants, seasonal greens, and veggies which they grow on the rooftop. They rarely buy any compost from outside and make most of the manure in-house, saving a good amount of money.

Anil remarks, “There is plenty of joy in being a sustainable eco-warrior. Growing your own food is like printing your own money. Try it, you won't be disappointed. The only con is that it can be addictive and there is a real risk of you infecting others with the same enthusiasm.”

Greenpeace India, an environmental organisation in Bengaluru, has launched a campaign, ‘Waste to Food’, inviting citizens to participate in the segregating and composting of their waste. Ravi Chellam (56), Executive Director, Greenpeace India, is a man who also practises waste management at his home.

Ravi has been segregating waste since childhood, when clothes, paper, metal and glass were always kept separately and sold to the kabadiwala. His current way of composting is using a setup of terracotta pots, popularly known as khamba, which he started using in 2009. “This way of composting requires limited space and can be done even in apartments. The entire kitchen and pooja waste are put in a separate bowl. Paper, metal, glass, clothes and plastic are segregated and either recycled/re-used in the house or sold to recyclers. We segregate milk sachets as it is virgin plastic and give it to our maid to sell and earn some money,” he explains.

On a daily basis, the segregated kitchen waste is emptied into a composting pot, stirred to ensure that it mixes well with the already composting mix in the khamba. “Care needs to be taken to ensure that the moisture level as well as the carbon to nitrogen ratio are maintained at optimal levels. Over weeks, as composting progresses, the matter needs to be shifted into what is called ‘leave it pots’ for the process to be completed. Depending on the season, it takes four to six months for the composting process to be completed.”

Carrying cloth bags while shopping, thereby avoiding the need for plastic bags, requesting shopkeepers to do away with unnecessary packaging, and not allowing the use of disposable cups, cutlery and plates are real-life examples of how we can reduce the generation of waste. “The real challenge lies in not creating waste-related problems to begin with. This requires a fundamental shift in our mindset towards consumption. For too long, we have been told that consumption is good; in fact, our economic growth model is based on perpetually increasing consumption. Next important challenge to overcome is the act of taking personal responsibility for segregation, proper disposal, and composting. I find segregating and composting empowering in many ways,” says Ravi

“Unfortunately, in India, waste is seen as something people from the lower castes have to deal with. It is vital that this mindset and the related narratives change quickly. Besides, designating fairly vast tracts of land as a landfill for garbage is unacceptable from a land use and social justice perspective, apart from the all too familiar public health and environmental reasons,” he adds.

It is time we as individuals understand that every single piece of garbage when handled responsibly becomes a resource so powerful that it generates good returns. Imagine people paying for your garbage rather than you paying to get rid of it, and initiate change today.