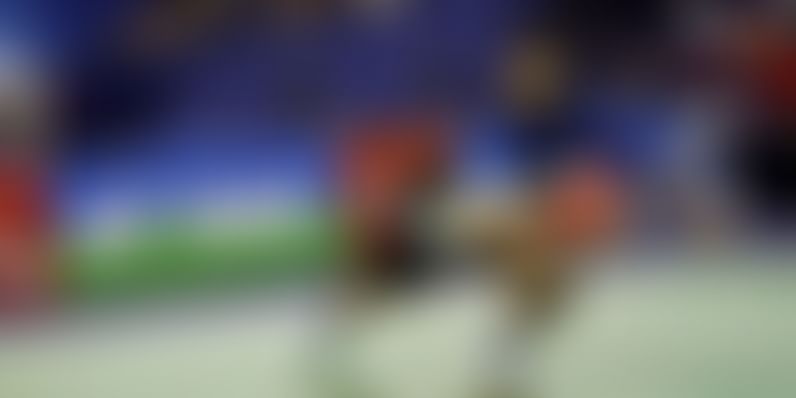 Star Indian shuttler Kidambi Srikanth defeated Japan's Kenta Nishimoto in straight games to win the men's singles title at the French Open Super Series in Paris. Srikanth dominated from the start to carve out a 21-14, 21-13 win in 34 minutes. Sunday's win helped the eighth-seeded Indian improve his head-to-head statistics against the unseeded Japanese to 2-0.

A few days ago, PV Sindhu crashed out of the $325,000 French Open Super Series after going down in straight games to Japan's Akane Yamaguchi 14-21, 9-21 in the women's singles semifinal.

Sunday's victory made Srikanth the fourth male player in the history of the game to win four Super Series singles titles in a calendar year. Srikanth struggled in the early stages of the first game with the Japanese taking a 9-5 lead but he made a strong comeback to force the lead at 11-9. The Indian did not look back from there, going on to win the opening game.

Srikanth dominated the second game right from the start, opening up a 10-5 lead and holding on to the advantage to win the game easily. Earlier, the Indonesian pair of Greysia Polli and Apriyani Rahayu defeated South Korea's Lee So Hee and Shin Seung Chan in straight games to clinch the women's doubles title. The Indonesians took 55 minutes to outclass the South Korean pair 21-17, 21-15.

In the first game, the Indonesian took a 3-0 lead in the early stages before the South Koreans fought back to draw level at 7-7. However, the Indonesians won three consecutive points to regain the advantage. They did not look back from there, beating back a spirited fight from the Koreans to take the first game.

The early stages of the second game saw a see-saw battle before the Indonesians took four consecutive points to gain the upper hand. The Koreans, however, continued to put up a spirited fight winning five back-to-back points to level the score at 13-13. But it did not prove to be enough as Polli and Rahayu claimed six consecutive points to close out the game and the match.

In the women's singles, Tai Tzu Ying of Chinese Taipei defeated Japan's Akane Yamaguchi in straight games to clinch the title in a match that lasted for 31 minutes. The top seed defeated the fifth-seeded Japanese 21-4, 21-16. The first game was a cake walk for Ying who clinched the issue with ease. The early stages of the second game saw an even contest with the score level at 8-8. Ying picked up the momentum from there on with three consecutive points before going on to clinch the issue.

In the men's doubles, Chinese Taipei's Jhe-Huei Lee and Yang Lee defeated Denmark's Mathias Boe and Carsten Mogensen to clinch the title. The seventh seeds stunned the second-seeded Denmark pair 21-19, 23-21 in 45 minutes. The early stages of the first game were evenly balanced before the Danish duo picked up four consecutive points to take a 9-6 lead. However, Denmark failed to maintain the momentum as the Chinese Taipei duo staged a strong come back to win the game. The second game saw a neck-and-neck battle before the Chinese Taipei pair prevailed to claim the title.