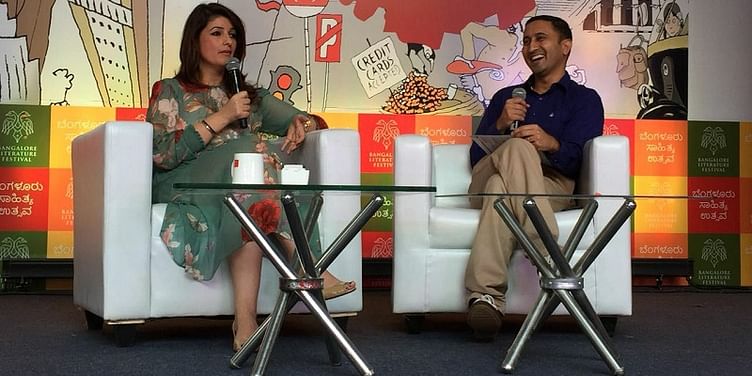 Twinkle Khanna, the winner of popular choice award at Bangalore Literature Festival, spoke intelligently on feminism, guilt, and her famous husband, with dollops of humour.

Like most women, I am an accomplished juggler. I have a full-time job, I write, I have five goldfish, four cats, a turtle, a dog, two children and a husband, and it is solely my responsibility to ensure that all these creatures are fed on a regular basis and are in a state of good health.

Twinkle Khanna had the audience in splits at the Bangalore Literature Festival with the above statement. She went on to talk about serious issues, albeit in her humorous style.

Despite being a staunch believer of feminism and believing in gender equality, Twinkle does have to work doubly hard and often wishes she had a few additional robotic arms – to help her daughter with her homework, to fix a gin and tonic for her husband and to slather on anti-aging cream on her face to halt the onslaught of aging, she said with tongue firmly in cheek.

Twinkle also spoke about battling guilt recalling the days spent finishing the manuscript of her book, when her daughter asked her if she had some time to help her open the gifts she received for her birthday a week back. The universal pull between work and family that women face and which does not have a perfect solution was the primary theme of her talk.

The wife, mother, and author

Twinkle’s first book was Mrs Funnybones, released in 2015, which was received well for being a well-written, breezy read. Her second book, The Legend of Lakshmi Prasad, for which she received the award, will soon be a movie starring Twinkle’s husband Akshay Kumar. Padman also features Sonam Kapoor and Radhika Apte in lead roles and tells the true story of Arunachalam Muruganantham's journey to make affordable sanitary napkins.

With self-deprecating humour, she answered a question from the audience on how she was bad at acting and never enjoyed it and hence doesn’t want to go back to it.

She did not shy away from taking jibes at the political establishment and said that nowadays there is so much saffron around that orange is the new black. She also attributed her sense of humour to her Gujarati grandfather. "Though people may not believe it looking at the current BJP regime, Gujaratis have a good sense of humour. I inherited it from him. He was a prankster, my aunts were like that. It's something we had as a family," Twinkle said.

Though she gets trolled "mercilessly" she learnt to turn a deaf year realising that the trolls don't even get her name right. "They spell my name like the comic Tinkle!" she said.

Twinkle Khanna is also in news today for speaking in support of husband Akshay Kumar, in a controversy that has erupted over a statement he made on television recently.

Akshay was slammed by comedienne Mallika Dua for a remark aimed at her during a shoot, but Twinkle said that the words were taken out of context.

Twinkle posted on Twitter, "I would like to address the controversy on the sets of ‘The Great Indian Laughter Challenge'. The show has a bell which the judges ring after a contestant's exceptional performance and when Ms. Dua went forward to ring the bell, Mr. Kumar said, ‘Mallika ji aap bell bajao main aap ko bajata hun'.

A pun on the words and actions related to ringing the bell. It's a colloquial phrase that both men and women use —for instance, ‘I am going to bajao him/her' or ‘I got bajaoed', all without sexist connotations.

I have always stood up for the freedom within comedy including defending AIB's (All India Bakchod's) infamous roasts on numerous occasions in the past and that is my stance even today, so kindly stop tagging me in this debate.”