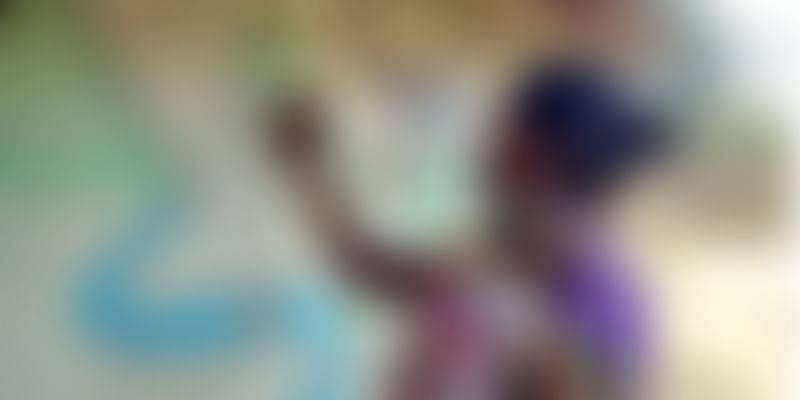 Sitting at the Salaam Baalak Trust contact point, New Delhi railway station, in the sweltering heat of May 2009, Charty Dugdale, Founder and Managing Trustee at Artreach India, first learnt of the power of art.

Watching and interacting with kids who come in for a square meal, to see a doctor or for basic lessons in numeracy and literacy, she realised that though the Trust would try and reunite them with their families or take them into care, the children often resisted.

“One day, an artist came in and took a workshop and I saw such a change in the kids, they sprung to life, eyes alight, laughing and joking. They thoroughly enjoyed making art, and it engaged them, like nothing else I had seen. The contact point coordinator told me that basic lessons don’t impact their lives much but if you ‘can catch their imaginations’ you can change their lives.”

To spark a change through art

In 2010, the contact point was in need of a repair job and a lick of paint, Charty took to the opportunity, amassed a team and some funds to pay for paints and brushes and over 10 days the kids, staff and a group of volunteers, led by Alexis Halliwell, a British artist, painted a jungle on the walls, that turned out a success. With this, Artreach India, a not-for-profit charitable Trust and it's the first project was born. “We wanted to help give their space a facelift and to ‘catch their imaginations’. The final outcome was rather magnificent; art helped brighten not only space but the kid's lives,” says 44-year-old Charty.

Artreach then on has been committed to addressing the great lack of creative strategies in dealing with socio-economic disparities, poverty and unemployment through a number of art filled projects run across Delhi, Haryana, Uttar Pradesh, Bihar and Jharkhand. Their approach is to work head-on with artists who can spark the transformative process in spaces where it is often hard to dream big.

“Artreach does not believe in quick problem solving, but in a slow process of holistic personal development for its participants who we see growing in their creative and expressive abilities over the course of our engagement,” says Ita Mehrotra, Programs Officer, Artreach India.

“We also believe that arts,” she adds, “be it photography, graphics, fashion design or painting can provide livelihood options, left completely unexplored by most, and that we can initiate this as a realisable opportunity for the young adults we work with through our Teaching Fellowships, a year-long program led by artists.”

Programmes for children, youth and women

Artreach programmes meet varying needs through specially designed modules, taking into consideration the socio-cultural context of the community they work with. By facilitating artists to engage with their modules in night shelters, care homes, government schools and tribal villages, they help the marginalised through the process of intensive creative teaching, processes and production.

A glaring example of this positive transformation is artist Sreejata Roy working through the community arts programme with homeless women at Jama Masjid Night Shelter for over two years. Her influence through art has given women with no access to employment or recreation a chance to express themselves. They created stunning paintings telling stories of their struggles that were exhibited at the India Art Fair, 2017 and British Council on International Women’s Day this year.

Artreach conducts other workshops like Khel Mel at museums and cultural spaces for economically diverse groups of children. They also carry out Volunteer Residencies - short term collaborations between professional visual artists and children from an NGO.

These programmes and projects of art practice aim at holistic change in confidence levels, expressive abilities and at times even livelihood means for those in need, says Ita.

This year, to take their work one step ahead, the team has launched its first, one-of-a-kind inclusive arts festival. The Artreach Festival is a platform to give the various programme and project participants an opportunity to showcase their creativity to a wide audience. Their artwork will be exhibited alongside the work of Artreach artist facilitators and all money raised from sales will directly go back to the makers.

Along with the exhibition, the festival will have an extensive interactive arts programme, including a new series of Khel Mel workshops, comics making workshops, Japanese animation films in Hindi, a screening of Mira Nair’s new film The Queen of Katwe, musical performances, an intensive expressive arts therapy masterclass over three days, and a food festival. “We are grateful to have the centrally located Bikaner House, Delhi, for this festival. It will run from December 22-24 and is open to all. Many of our programme participants - children, young adults and women from our partner NGOs - will attend the festival and participate in the workshop series during the festival,” says Ita.

However, to support, meet the expenses and turn this festival into a reality, Artreach has taken to crowdfunding and has a set a goal of Rs 3,00,000 with Support the Artreach Festival campaign.

“Our artist Avinash Karn, who has worked with tribal girls and women in rural Jharkhand for over year, together, have created murals and paintings on paper in the Madhubani style. These women, now more confident than ever have voiced their desire to exhibit their creations outside of their village and with help from you, this can be made possible through the Artreach Festival,” says Ita

The proceeds will be used to frame and install the exhibition, purchase art supplies, cover travel costs for outstationed participants, support infrastructure and for snacks and beverages.

After seven years of running programmes that take great care in assisting an artist to understand the needs of participants with respect to their social backgrounds, Artreach India has worked with over 3,500 children, young adults and women as their direct beneficiaries. With a team of three paid part-time staff members, two of whom are practising artists themselves, the not-for-profit has engaged with 75 contemporary, traditional Indian and international artists to offer art, often given the backseat, an opportunity to shine through the lives of the underprivileged.