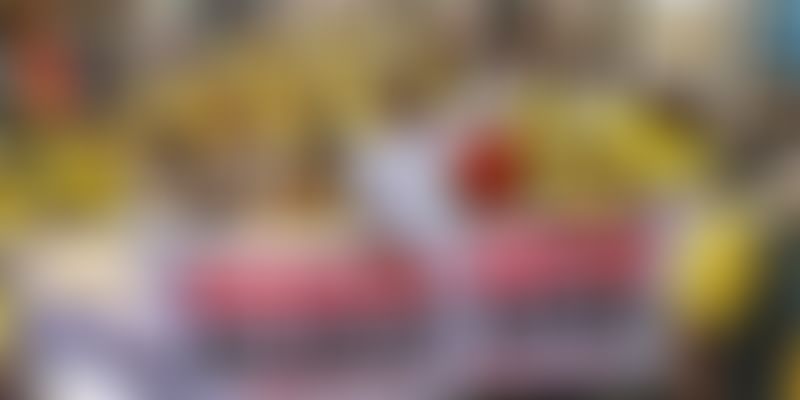 For us, the Bharat Yatra is just the beginning of a journey. I am convinced that India will be safe only when our children are safe.

On a rainy Tuesday in October, a trembling girl stands on stage in front of thousands of students at a university in Meghalaya to narrate a harrowing tale; she was kidnapped at 12 years of age, taken away from her family, sold numerous times across the country, abused and raped. Her desperate father managed to contact me somehow, and Sunita was rescued after much effort. She is 24 now, happily married and a vocal supporter of Bharat Yatra.

She is very clear why when she announces: "I do not want any girl to go through what I did". Thousands like Sunita have helped us transform the idea of Bharat Yatra into a mass movement to reawaken the slumbering conscience of our society.

For about five weeks between September 11 and October 16, tens of thousands of volunteers and I marched more than 12,000 kilometrers, literally across every nook and corner of the country. For a long time, I have watched with growing anger and alarm how children are being increasingly subjected to sexual abuse in India. I know that our children are not safe anywhere. They can be raped and murdered inside their homes, in schools, in hospitals, in daycare centres and in playgrounds. The predator could be a family member, a teacher, a driver, a doctor, and even a policeman. A sense of lingering fear has crept into our society when it comes to the safety of our children.

Sunita and children like her have been the driving force behind my war on sexual abuse and rape. There have been countless children, all across the country who motivated the Yatris and served as living reminders that the Yatra was making a difference in the lives of these children.

From the 5,000 in Jaipur who attended a class to learn about child sexual abuse to Sarla and Sheetal in Nasik who skipped the Sunday morning aarti to attend the Yatra, "We go to God to pray. But what's the use if my father still says that it's unsafe for me to attend the tuition alone," asks a dejected 16-year-old Sarla. "The Bharat Yatra is our way to protest. We hope that no girl ever feels unsafe ever again," they say. Or 12-year-old Roshni from Bhopal who, along with her tuition friends, makes sure to inform an adult if they see a child being made to work at a tea shop, or if a child wants to go to school but can't.

The problem lies with law enforcement as well as regressive social attitudes. After decades of struggle, Protection of Children from Sexual Offences (POCSO) Act became law in 2012 and envisages stringent provisions to punish child rapists and other offenders.

But poor implementation has virtually defeated the basic purpose behind POCSO. Often, police personnel do not take the victims and their parents seriously. Even if they do, the legal process is so infuriatingly slow that it becomes a classic case of justice delayed is justice denied.

In some states, it will take about 50 years to clear the cases of child rape and other sexual offenses. The conviction rate in such cases is a pathetic four percent. Even when it comes to trafficking, we see similar apathy and delays. A child goes missing every six minutes, out of which most belong to poor families. They are sold as slave labour by placement agencies or even as sex slaves. Till a Supreme Court verdict in a petition filed by my organisation Bachpan Bachao Andolan, making it mandatory to register an FIR, policemen would hardly make any effort to trace missing children.

Even more serious is our regressive social mindset. Outdated notions of family honour and tradition often compel victims and family members to keep quiet. It is the victims who are shamed and live in fear while the predators walk free and fearless. One of the key reasons we organised this historic Yatra was to raise public awareness and to become a voice for the silent victims.

I must say that the response has been tremendous. Thousands supported and marched with us in every hamlet, town and city. More than 10 lakh people became part of the movement. Andhra Pradesh Chief Minister N. Chandrababu Naidu joined Bharat Yatra with more than 3,00,000 people. Madhya Pradesh Chief Minister Shivraj Singh Chauhan promised a law to give the death penalty to child rapists.

It was a rare occasion when Chief Minister of Jammu and Kashmir Mehbooba Mufti, while participating in flag-off of the northern leg of Bharat Yatra, called upon the parents to encourage their children to speak boldly against child sexual abuse. The Chief Justice of Mumbai High Court promised to set up a special taskforce consisting of lawyers, doctors, psychologists and policemen to handle every case of child abuse in hospitals. Union Home Minister Rajnath Singh promised to table at the earliest a new and stringent law against trafficking in the Parliament.

The feather in the cap was the unprecedented support from President Ram Nath Kovind, who not only shared the dias with survivor of trafficking and sexual abuse, but he also called the marchers the true nation builders, giving them a vision for New India to work towards making a road map to free nation from child sexual abuse by 2022.

For us, the Bharat Yatra is just the beginning of a journey. I am convinced that India will be safe only when our children are safe. It is the moral obligation of each one of us to keep our children safe.