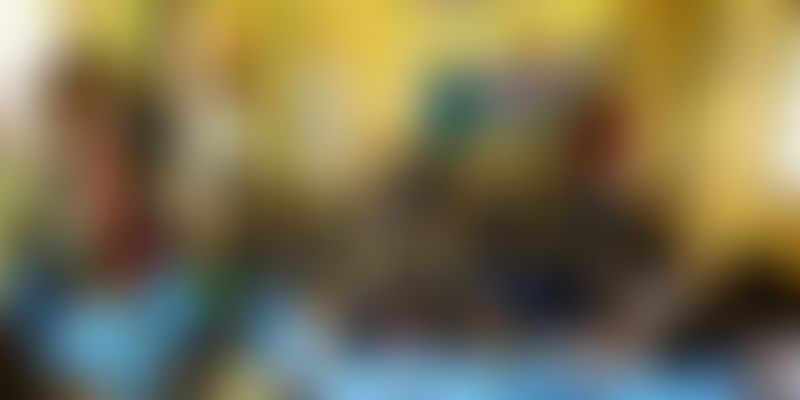 Since 2012, Kaivalya Vichar Seva Samiti provides clothes, food, and education amongst other services to rural farmers, women, and children with the main aim of eradicating poverty and illiteracy in India.

In India, almost 70 percent of the population lives in the village, while their major source of income in rural India still remains agriculture. Yet, the agrarian community faces massive problems such as farmers suicide, droughts, debt, crop failure, and poverty.

To address the problem of the rural farmer, Vishal Singh started Kaivalya Vichar Seva Samiti as an NGO in 2012 with six friends. The aim was to elevate farmers’ lives by providing them with adequate training in agriculture while providing health checkups, education, food and clothing to their families in order to ensure a sustainable environment for village dwellers.

How did it all start

Back in 2011, Vishal, 31, shared his ambition with a few of his friends, while studying Agricultural and Food Engineering in IIT Kharagpur. His desire was to utilise his education to train farmers and elevate them from their distress through his initiative. Being a farmer’s son, Vishal had observed and quietly noted the plight of Indian farmers and farming practices and how they were immensely troubled time and time again by the scarcity of water, failed crops and by debts. While growing up in Varanasi, he realised that Indian farmers were neglected and often looked down upon, and he desired to launch an initiative to help farmers after completing his education.

After deliberating on various pros and cons on starting the initiative, six alumni (including Vishal) of IIT Kharagpur decided to launch Kaivalya Vichar Seva Samiti( KVSS) in 2012.

“Hemant, Ajay Kumar, Ajay Swarnakar, Deepak and Santosh and I had decided to work for farmers and other socio-economic deprived peoples for their livelihood. We had registered a non-profitable organization, KVSS, and selected two villages, namely Soladahar and Gopali, and conducted several meetings with those villagers regarding their problems and priorities”. says Vishal.

The team then decided to implement certain projects such as Anna-Daanam (Food distribution), Siksha-Daanam (Education) and Vastra-Daanam (Clothes distribution) amongst others to address issues that plagued these villagers.

KVSS has nearly 400 volunteers and has successfully trained more than 8,000 farmers in organic and natural farming. Nearly 5,000 socio-economic deprived children have been provided with educational, health and other necessities. KVSS started its operation in West Bengal and Uttar Pradesh and later extended to Odisha in 2013.

The reason for this initiative

In the recent years, it has been observed that the number of farmer suicides and deaths has increased tremendously as they are unable to provide a livelihood for themselves and often succumb to their difficulties.

“My father always used to say ‘We have to bring educated youth back into farming, to make it a renowned dignified occupation otherwise farmers will die in debt only’. Furthermore, I have realised that it is when people don’t have a job at hand or any opportunity in sight only then they will resort to taking on farming. It’s sad to see that nobody wants to be a farmer,” Vishal quips.

He realised that the four main issues that need to be addressed are scarcity of qualitative basic education, scarcity of adequate farming practices, health monitoring and hygienic food and clothes.

Through this initiative, Vishal and his team aim to train farmers in organic and natural farming while providing them with education, health check-ups, food and clothes along with other services to help them cope with their challenges in a better way.

Programmes under this initiative

There are four main programmes under KVSS. Anna-Daanam is a project that provides food to rural children. Whereas, Shiksha- Daanam, Swathya-Daanam and Vastra-Daanam are programmes that provide education, health check-ups and clothes respectively to underprivileged youth and children.

Furthermore, in 2016, KVSS had started its farming model, ‘One Lakh from One Acre’. This model is implemented in Mayurbhanj and Bolangir district of Odisha with the help of other eminent NGOs of Odisha.

“In Mayurbhanj, we have trained more than 500 farmers of Lodha and Santhal Tribes and they have cultivated numerous medicinal plants. In Bolangir district, nearly 2,200 farmers have been trained in organic vegetable and spices cultivation. About 200 farmers hailing from Chilika are trained in earning livelihoods from mangroves, sea weeds and aquatic species,” Vishal says.

This initiative follows a social entrepreneurship model in order to create sources of sustainable and progressive livelihoods by training them in agriculture and allied sectors.

According to Vishal, KVSS is going to be upscaled in the coming years.

“We have decided to expand our varied programmes by keeping in mind that every child should be educated, healthy and happy. Moreover, we want to achieve our goal of training 10,000 farmers every year to ensure a sustainable livelihood for them and want to provide education and health to approximately 1,000 children every year. We are very dedicated in making these goals come true in the future,” he adds.

Till now, nearly 8,900 farmers have been trained by KVSS in organic and natural farming. Many have been skilled in organic growing, organic product manufacturing, kitchen garden promoting, nursery growing and medicinal and herbal plants cultivating. Approximately, 5,000 socio-economic deprived children have got educational, health and other basic support till now.

KVSS believes to further improve the condition of deprived communities by creating livelihood opportunities in the next coming years.