After cashing in early on the mobile wave, InMobi co-founder aims to do an encore with the sharing economy 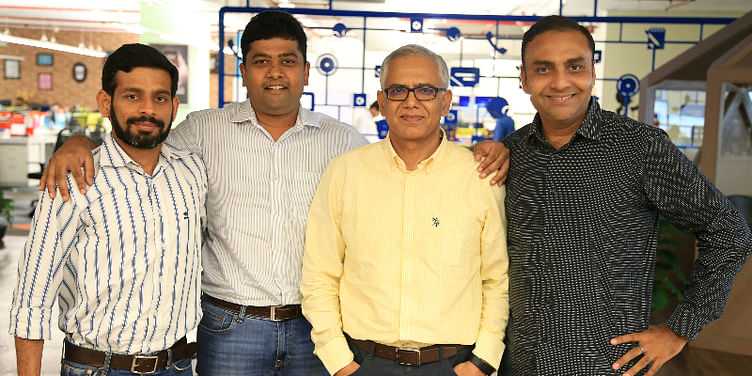 After working in stealth mode for four months, InMobi Cofounder Amit Gupta is set to launch his new startup. Yulu will offer IoT-based bicycle sharing to resolve last-mile connectivity and is backed by the other cofounders.

Stuck in a traffic jam on 100 Feet Road, Indiranagar, Bengaluru, I quickly glanced at my watch and then at Google maps to realise that I would be five minutes late for a meeting. I texted my hosts on my new estimated time of arrival (ETA) and reached the venue with seconds to spare.

Like most other meetings with entrepreneurs in Bengaluru, the meeting started off with traffic woes and how people are at the mercy of the Traffic Gods. But instead of the conversation being a footnote in the meeting, we continued to focus on the traffic problem and pertinent solutions.

I was talking to Amit Gupta, one of the Co-founders of Inmobi. Till four months ago, he held the designation, Co-founder and President - OEM and Telco Solutions at InMobi. But for the last four months, he - along with a small team of diverse individuals – has been hard at work on an IoT solution aimed at targeting the traffic menace in our metro cities. His designation now reads, Cofounder, InMobi. Here is the story of Yulu, which aims to work on a form of transport that abides by a ‘4S philosophy’- solo, shareable, sustainable and scalable.

The average speed of traffic in many pockets of most cities is often slower than walking. Amit said, “If we are going at 5km/hour in major cities, then we will not grow. We will not able to make meetings happen and businesses will not be able to function effectively.”

To illustrate his point, Amit showed me a screenshot that he had taken on the way to our meeting.

Rapid urbanisation has left infrastructure needs in cities way behind. This has had a huge impact on mobility in big cities. Amit elaborated that not only has traffic congestion affected the productivity of people, but it has also had a major impact on physical health and emotional well-being.

While the government is channelising its means to solve this problem by developing mass-transit systems and looking to improving the quality of roads, Amit feels that last-mile connectivity is still not solved and there’s a need for an efficient and affordable mode of transportation.

But there is no “silver bullet” solution to this problem and hence a collective effort is needed to fight this battle. With his latest venture, Yulu, Amit aims to decrease the traffic on roads and help people go from point A to B quickly.

Yulu’s IoT-powered solution based on ‘4S’

Amit said his research and estimates showed that a city like Bengaluru has seven million vehicles. Yulu’s vision is to de-congest urban traffic by providing a scalable, affordable, efficient and clean mode of transportation to solve the first and last-mile connectivity and short distance commutes. Explaining his thought process, Amit shares,

We need to replace big personal vehicles with smaller and efficient clean energy vehicles. At the same time these vehicles need to scalable and sharable so that the overall cost of ownership is low and the utilisation is very high.

Metro Rails (MRT), buses and shared taxis are viable options for longer commutes. But we need to connect these modes of transportation with some means for the first and the last miles.

Amit says in the current world majority of people travel short distances alone and so using two-wheelers makes sense. But using conventional fuels to operate two-wheelers is logistically challenging in a sharing economy. On the other hand, electric vehicles aren’t a feasible solution in markets like India, because there aren’t enough e-charging stations needed to meet the demand and other issues.

The most viable interim solution, Amit felt, was to use bicycles to cover short distances. Amit shares,

The advantages of using bicycles are multi-fold. They are fuel-free, easy to maneuver, efficient, healthy and fun to ride. Above all, we can make this sharing friendly by using IoT technology.

How Yulu Bikes will work

To operate Yulu, users will need to install the Android or iOS app and load their wallets using Paytm, UPI, credit cards or debit cards. The platform will work on a pay-per-use model, where users will be billed for every 30 minutes of use. Apart from this, Yulu will also generate revenue from advertising on bicycles and data from its usage.

Registered users will be able to unlock a bicycle by scanning the QR code on bicycles and can start their ride.

Amit notes their bicycles will soon be available at all major points of interest such as residential areas, offices, tech parks, recreational centres, and metro stations. Users can ride the bicycle to any place and drop them at any legally allowed public parking space.

The locking and unlocking are enabled by a dockless mechanism that can be operated through the Yulu app. Giving me a demo, Amit says,

We are using IoT technology to make our bicycles sharing friendly. An advance low energy protocol of Bluetooth and GPS makes it dockless, thereby giving freedom to Yulu users to pick and drop our bicycles anywhere under the sun….Unlike Uber, where a car comes to the users, one just needs to locate the nearest available bicycle and walk towards it.

Once Yulu reaches a certain threshold volume, the venture will be able to see patterns and locate many zones of low supply-high demand and vice versa during rush hours. Yulu will leverage GPS data to create “heat maps” of these patterns and address the process by rebalancing; their on-ground fleet management team will move cycles manually to areas of high demand. Amit adds,

We will use machine learning and AI to make the process of rebalancing very efficient.

Talking about security measures to prevent thefts, Amit gave a demonstration of how a loud alarm goes off if one tries to tamper with the dockless mechanism. On the backend, Yulu's on-ground team are able to access the location and intervene, if needed.

Four months in the making

While operationally involved at InMobi, Amit would often visit China on work. There he noticed the tribulations and success of bicycle sharing players like Offo and Mobike. It took these companies close to two years to gain market acceptance and mass adoption. He says,

Inspired by the success in China, Amit wished to start a venture along similar lines but customised to Indian needs. To this end goal, he assembled a founding team comprising seasoned entrepreneurs and professionals with deep expertise in their respective core areas. Amit says,

All of them are passionate about making a huge social impact.

Yulu currently has about 20 employees and the team has so far been working out of InMobi’s office space for the last few months. While the bicycle sharing and the bigger shared mobility market is in its infancy in India, Amit felt that the time was right to startup.

Over the last few years, InMobi has had its fair share of highs and lows, but in April the company had shared that it had become (EBITDA) profitable for the year ending December 2016 and expects to continue being profitable in 2017. So given the situation, Amit shared that the other InMobi cofounders were supportive and actually encouraged him to work on Yulu and tackle the traffic congestion in India. The other co-founders are angel investors in the venture.

Amit says he is in talks with government bodies to make bicycle sharing seamless for Indian roads by pushing for bicycle lanes. He adds that Yulu is aligned with India’s top priorities namely “Make in India”, “Clean India”, “Green India”, “Digital India”, “Cashless India” and “Adoption of Aadhaar”, which will lead to strong support from the government at state and national level.

In the last few years, internet technology and mobile adoption have brought businesses closer to customers. This has led to a data explosion, where data is the key player to understand market trends and realign businesses based on market needs. Amit says,

Amit estimates that market size of the shared mobility space under bicycles is currently close to $8-10 billion globally and will be more than $1 billion in India by 2022. Since mobility needs have a high-frequency use case, Amit believes it can be converted into a platform to increase business potential by 5-10 times.

Private and public players have also been looking to make inroads in the shared mobility space in India. After tasting success with the Trin Trin bicycle sharing scheme in Mysuru, the Karnataka cabinet recently cleared an eco-friendly project for Bengaluru to launch 6,000 cycles at an estimated Rs 80.18 crore. Zoomcar is another recent entrant in this space and recently launched PEDL, a smart cycle sharing service. Currently in beta testing stages at IIIT Delhi and some other colleges in Delhi, LetsCycle.in, is another early-stage player in this space.

With Bengaluru as their headquarters and first test market, Amit estimates that Yulu bikes will be available at selected locations in a month’s time. He added that Yulu bikes are “Made in India” and that they worked with different players in the space to get the final product in place. Yulu is also working with designers to develop collapsible helmets that are sturdy and portable.

Amit believes that there will be noticeable impact once the economies of scale kick in.

“We expect a significant reduction in traffic congestion and pollution levels due to large-scale implementation. Our fleet management and maintenance teams will generate thousands of jobs for the local youth,” Amit ends.