With over 2 lakh trees, this NGO is regenerating a forest in Tamil Nadu 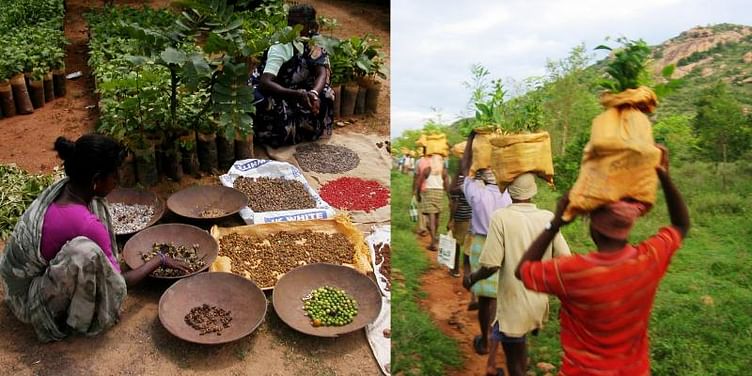 The Forest Way, a non-profit dedicated to restoring nature, has been generating employment and recreation for indigenous communities while protecting forests for nearly a decade.

The indispensable importance of forests is certainly not a subject that most people are unaware of. From a home to flora and fauna to being an important factor that helps mitigate climate change, our dependence on forests begin right from the air we breathe to the wood we use.

This once abundant abode of resources however, is slowly turning extinct in our country due to increased land use, overgrazing and indiscriminate felling of trees. India is losing 1.5 million hectares of forest cover every year and at this rate it won’t be long before our forests are depleted entirely.

In light of all that has been happening, working endlessly to do their bit towards protecting forests is The Forest Way (TFW). An organisation based in the town of Thiruvannamalai, Tamil Nadu, TWF has been regenerating a forest on the sacred Arunachala hill and also supporting families from the villages around the hill.

For the cause of ecological restoration

The Forest Way was founded back in 2003 when a team of seven joined forces to heal the damaged environment. Fifty-year-old V. Arun, a qualified engineer, quit a mainstream job to take up conservation and education. He worked in the Krishnamurti foundation school in Chennai for 12 years before moving to Thiruvannamalai to start the trust. He says, “We came together, not trying to solve a problem but just to do what we can, as conscious individuals. We are deep into the sixth extinction and we can only postpone the inevitable. Socially speaking we can try and live by what we think is right and this is what we as a trust want to do.”

Govinda, another primary member of the team, is of British origin, he shares, “I have lived in India for nearly 20 years and came here on a spiritual search but later was drawn in to ecological restoration. My wife and I have ever since been an integral part this project.”

Since the Arunachala hill is sacred and famous worldwide, Govinda was immediately drawn to it when he first moved to Thiruvannamalai. “The hill was the nearest largest green region and could serve as an example to what we had set out to achieve. Also, Arun’s great grandfather lived with Ramana Maharshi, a famous saint from here. So, this was his first choice too.”

TFW was officially registered in 2008, with a core team of members from different walks of life, a violinist, teachers, entrepreneurs and a full time conservationist among others, who have been living together with the indigenous community in thatch houses powered by solar energy, also growing their own food in attempt to live sustainably.

The team at TFW started its projects with fervour and have been faithfully working towards turning the Arunachala hill into a region thriving with biodiversity. Its main work is centred around raising a nursery of 25,000 to 30,000 indigenous saplings a year, out of which on an average 15,000 saplings are planted on the hill every year.

To protect these growing saplings and already existing trees the team creates and maintain fire lines crisscrossing the hill for about 20 kilometres, to prevent fires from spreading all over. With an experienced fire-fighting team in place, TFW also manages to actively fight unexpected fires at any given time, shares Arun.

The team also supports 60 families through the year. During the afforestation and fire line creating process they employ more than a 100 people. Alongside providing employment for adults, TFW also runs an alternative school called, Marudam Farm School for children between the ages of 4-10. As the name suggests, the school is located on an eight-acre organic farm with native crops and vegetables. The food grown on the farm is used to feed the 70 children in school.

“Our hope is that an education at Marudam Farm School will help to bring about sensitive and intelligent human beings. Children will discover not only their interests and passions, but also nurture skills in both academic and non-academic areas that will help them meet any life challenges. We care for the land and use it as a rich educational resource, integral to the learning process,” explains Arun.

Their contributions do not end here, TWF also runs a children's park at the base of the hill for recreational purposes, free for the public of the town to use and a forest park with indigenous trees for educational purposes.

The team is grateful that since they began operating, it has had a beautiful run with lots of success and very little negatives.Their biggest speed bump was when Thiruvannamalai suffered the worst drought it has seen in 140 years, this year. “The drought was severe across the country. Farming had completely ground to a halt for a year. Many plants and wild animals died, especially spotted deer. But things turned around for the better in August when we received 50cm of rainfall which filled up the water bodies.”

The team has doubled its efforts to undo the damage and have begun work by planting 10,000 saplings.. “This year we are also planting close to the peak of the hill, which involves a trek of over two hours. We have now also taken up the process of restoring a lake, Thamarai Kolam which is home to many species of water birds,” says Arun.

The lake restoration project seeks to generate employment to sustain around 50 families and create a new park around the bund of the lake. “We wish to reclaim this lake for the community and are planning to take this up in stages and are in dire need of funds.” To meet expenses, TFW has launched #RestoreThiruvannamalai campaign and are also looking for offline donations. “So far we have raised funds from the interested public only. Through this campaign we want to reach out to everyone.”

The sweat and toil the team has put into the greening of the hill has had a magical effect on the local fauna. With the green cover on the hill returning the number of the fauna has risen exponentially. “The current count of bird species is 202. The other animals to have returned are spotted deer, porcupines, jungle cat, civet cat and pangolin. This hill that was barren for nearly a century, today is covered with a thick green cover and is fast emerging as a successful replicable model.”

TFW has planted over two lakh trees, helped prevent fires and foster a sustainable community that actively participates with the team in a decade of their existence. Not looking to slow down anytime in the future, the nearly 80-member team is looking to adopt two more water bodies, publish a book on Thiruvannamalai birds and are on the verge of leasing a 3 acre land to start a weaving unit and cotton growing project.

Its goal here on is to raise employment for the local population and grow organically. If anything, this not-for-profit inspires us to learn from indigenous communities and look to learn from nature’s ways, suggesting that a little positive action can have an even bigger impact in the long haul.