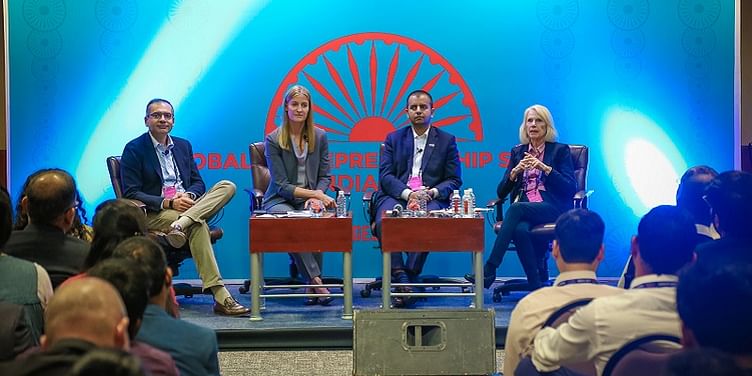 When an entrepreneur starts a business, among the factors that determine success or failure, most are intrinsic and internally determined.

Entrepreneurship is risky, and the odds are rarely stacked in favour. It is a known fact that close to 99 percent of startups fail, and for one to remain in the limelight, it is important to plan and prepare from the word ‘go’.

In most cases, it is a ‘founder’s mindset’, and emotional quotient (EQ) that determines whether she or he can attract investments, the right people, and understand the market. Everything boils down to intrinsic and internal factors that are closely associated with the entrepreneur.

At the recently-concluded Global Entrepreneurship Summit (GES) 2017, which was co-hosted by the Government of India and the US Government, Stephanie Marrus, Director of Entrepreneurship, University of California, moderated a masterclass on ‘Pitch to the Rich’ which spoke about entrepreneurs’ emotional quotient.

While the Indian startup ecosystem isn’t as mature and evolved as the one in Silicon Valley, many seasoned entrepreneurs here, like Deep Kalra, Bhavish Aggarwal, InMobi Co-founder and CEO Naveen Tewari, Flipkart Co-founder Sachin Bansal, Paytm Founder and CEO Vijay Shekhar Sharma, and many others, are turning angel investors.

The main reason for this is to ensure they continue to remain in touch with the changing landscape and technologies. Both Bhavish and Deep said that while their own companies had seen several innovations and shifts, the technology today was growing at an aggressive pace.

They said it is increasingly important to keep in touch with what is happening around them, and in the ecosystem. This helps to understand the innovations that are becoming part of the ecosystem.

Masayoshi Son, Founder and CEO of the Japanese internet conglomerate Softbank, has publicly been quoted as saying, “Whenever I invest, I look at the eyes of the entrepreneur.”

What he means is that he seeks passion and drive, which eventually determines an entrepreneur’s success.

Kristina said she could determine if someone would be successful when they walk into a room. It might not seem much, but body language and the way an entrepreneur presents herself of himself matters to investors across the board.

In the early investment days for a startup, an investor, especially an angel investor, invests not on based on the company’s market value, but on the entrepreneur. “While the background is important, the conviction she or he brings to the table is what matters,” said Deep.

He added many great businesses do not see the light of the day because entrepreneurs are not convinced of the problem they are solving.

While grit and the determination to win is important, it is usually difficult to assess how an entrepreneur will react when the going gets tough. “Don’t look back for the first four to five years. You will not have a semblance of a business. Apart from conviction, you need to be resilient when the chips are down,” said Deep.

It takes time for businesses to build, and it is usually how an entrepreneur handles the first five to six years of determines the success and the growth of the company. Bhavish added that entrepreneurship, generally, is the ability to balance and push through in a world of chaotic information.

Don’t be emotionally vested in your idea

This might sound like an antithesis to the previous pointer but really is different. It is good to be resilient, and be vested in a business, but it is equally important to understand if the idea has a market or not. Data from CB Insights shows close to 48 percent startups fail because of the lack of a market for an idea.

“Most times, as founders, we do not realise whether the idea will have a market or will it work or not. It is therefore important to talk to more people, understand if there is a market for what you do or not. And the ability to listen comes when you aren’t too emotionally vested in your idea,” said Bhavish.

As an entrepreneur, selling is the most important skillset one can learn. An entrepreneur needs to sell the business idea to investors, to stakeholders and new employees. “Selling gives you the ability to get investors’ attention in an elevator pitch in the first few minutes. You need to focus on what is the problem you are solving, and how you are different from the competition,” concludes Deep.