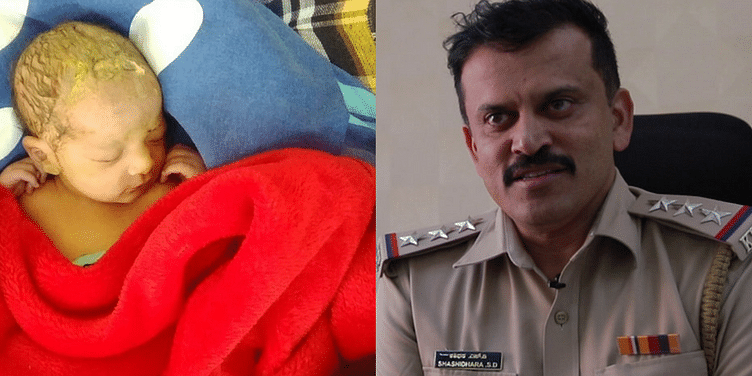 In the wee hours of a chilly morning in Bengaluru recently, a newborn girl was found lying on a pile of garbage. The baby seemed to have been thrown into the mess minutes after her birth. But as they wont to do, a good Samaritan rescued her and handed her over to the Basavanagudi police station.

If this act alone did not restore your faith in humanity, take to account this: Inspector Shashidhara who took charge of the situation rushed her to a and took the responsibility of paying her bills.

In a post by Milaap, the inspector said that he was returning home after a late night, at 2 am, when he heard a baby crying.

He noticed a bundle on that platform around Armugam circle right in the middle of the road. He had the driver stop the car to look for the mother or anyone nearby. Once he realised what was really happening, he rescued the baby.

He then took her to the police station the next morning. The newborn, who wasn't washed or fed and even had the clip on her umbilical cord, was rushed to Cloudnine Hospital for examination.

She had severe respiratory distress and an infection because of the cord. She was on ventilator and in the hospital for 23 days. The government could not bear expenses as she was brought to Cloudnine Hospital. It was the nearest, and she needed immediate care, Inspector Shashidhara added.

Though the police were in search of her parents, nothing substantial reached their hands. The hospital then surrendered a bill worth Rs 4 lakh. Unable to bear the cost, the inspector along with the hospital took to Milaap, the crowdfunding platform, to raise funds.

I had just Rs. 20,000; I paid all of it. I wanted to pay for the baby's treatment irrespective of the cost, since this hospital had overlooked the formalities and provided quality treatment to save her life. When the bills went beyond my affordability, the hospital helped me start a fundraiser for fulfilling the bills. We raised about Rs 4,34,818. They also waived off most of the fee.

The baby girl fought for 23 days in a NICU and finally came out of the hospital hale and hearty. She was then moved to a rescue home 'Shishu Vihar', where a couple adopted her.

I wish I could have taken her home, but I did not have that opportunity. I am glad that I made the right decisions on the day we found her. I thank everyone who came forward and helped her when she needed it the most, he added.

Do you have an interesting story to share? Please write to us atÂ [email protected]. To stay updated with more positive news, please connect with us onÂ FacebookÂ andÂ Twitter.