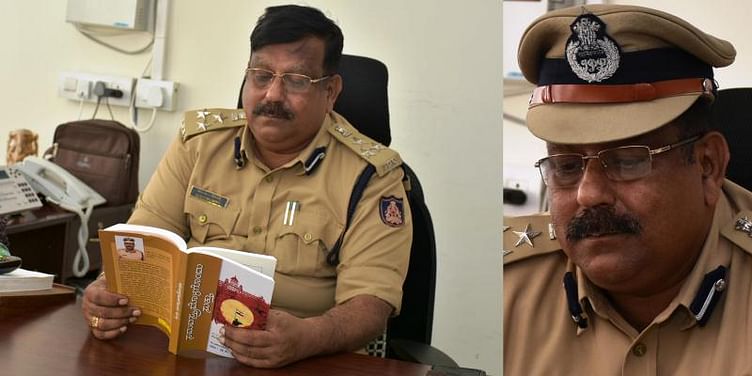 Serving as a Joint Commissioner in Bengaluru Police, Rajappa moonlights as a poet, and uses his professional experiences to pen poignant lines.

A celebrated name among Karnataka’s law enforcers is D C Rajappa, who is a firm believer of community-friendly policing. He is also a renowned Kannada poet, and believes that empathy is the guiding force for both poets and policemen. He encourages policemen to write poems out of their personal experiences, and has brought out the hidden poet in 500 policemen in Karnataka.

Rajappa came into the police force by chance. He recalls, “Since my initial had ‘D C’ in it, I aspired to become a district collector. However, after giving my exams, I qualified for the police service instead.” He adds, “Ever since I have worked as a policeman, I have deeply respected, loved, and enjoyed wearing the uniform and working in the police force.”

Over the next 28 years of working in the police force, Rajappa has worked across Karnataka. He has served as a police officer in Bidar, Sagar, Mangaluru, Gulbarga, Shimoga, Bellary, Bijapur and Bengaluru in different postings including in Railways, CID and as DCP West. He is currently serving as Joint Commissioner, City Armed Reserve (CAR), Bengaluru.

Rajappa started writing poetry at the age of 14. He was deeply inspired by a narrative poem titled Karisidda by Kuvempu, who is widely regarded as one of the greatest Kannada poets. The poem had a poignant description about Kuppali, Kuvempu’s place of birth and residence in Karnataka’s Malnad region. Rajappa wrote a similar poem about his own native.

“Kuvempu’s poem moved me immensely to write. I met Kuvempu in 1979 when I was doing my Bachelor’s at Mysore’s Maharaja College. As an aspiring poet, I did show my work to Kuvempu, who encouraged me to keep writing.”

From real-life experiences to verse

That was just the beginning and Rajappa’s love for poetry has only grown over the years. So far, he has written over 300 poems, much of which is inspired from his life experiences as a cop. Recalling a disturbing experience, he says,

“There was an incident where a 13-year-old girl was raped and impregnated. Her parents brought that innocent girl to my office to seek justice. The girl walked in with a baby of her own. Watching that bereft teenager, I wrote a poem describing how she was deprived of her playful childhood. The poem’s starting lines were, “Neene magu, nengondhu maguve….eli kaleithu balya? (You yourself are a child, and a child of your own for you?).”

Rajappa believes that a policeman’s experiences are unique in a society, and should be chronicled and shared. He tells us about an accident scene in Gulbarga that changed him deeply. He was posted there as ASP. A huge truck transporting stone quarries to Mumbai had crashed killing several people. He recalls,

“While we were separating the dead bodies, it was heart-wrenching to separate the dead body of a nine-month-old baby from his mother. The infant had died while feeding on its mother. The sight of milk spilling out of the baby’s mouth and the mother’s breast disturbed me so much that I wrote a poem called Saavu mathu sambrama (roughly translated to Death and Celebration).”

The poem is written in the form of a conversation between the poet and Death. In the poem he asks Death why it chose to prey on an innocent victim instead of choosing those suffering people who await and invite death on daily basis.

Over the years, Rajappa published three collections of poems – Hullu Meyuva Kudure, Maari, and Baradu Bhoomiya Sathyagalu. A celebrated Kannada poet, he is a recipient of the Amma award, Basava award, and Rajyashree award, and has recited poems in four Kannada Sahitya Sammelanas- in 1997, 2004, 2011, and 2017.

Role of police in creating a better society

Rajappa is a firm believer of community-friendly policing, where policemen understand and connect with people’s problems better, looking beyond their routine duties. He also believes that empathy is at the core of both poetry and police work. “Policing is looked upon as a stern profession with no place for emotion. But, that’s not absolutely correct. I believe in policing with a human touch,” he tells us.

To bring out the literary talent and poetic sensibilities among the men and women in uniforms, Rajappa has edited four editions of anthologies containing poems written by policemen of all ranks- from constables to Inspector Generals. The anthologies, titled, Samavastra Dolagondu Sutthu (meaning Circumnavigating the police uniform), have published works of over 500 policemen from across Karnataka. Rajappa says,

“Poetry and literary mindset will enable policemen to see everything in a positive light. In a way it is underlined with empathy and human values.”

Besides working on the fifth edition of the anthology of poems written by police personnel, Rajappa also plans to organise a two-day-long, State-level Sahitya Sammelan for policemen. “We plan to discuss topics like ‘police and public interface’, ‘police and media’, ‘police and prosecution’, among other things at the event.”

“It is far-fetched, but someday I hope to organise an all-India police poetry meet that transcends the barriers of language.”

When asked whether he would document his policing experiences in prose, he doesn’t deny the possibility. “I might work on a book and get it published in the future, once I find the time,” he signs off.