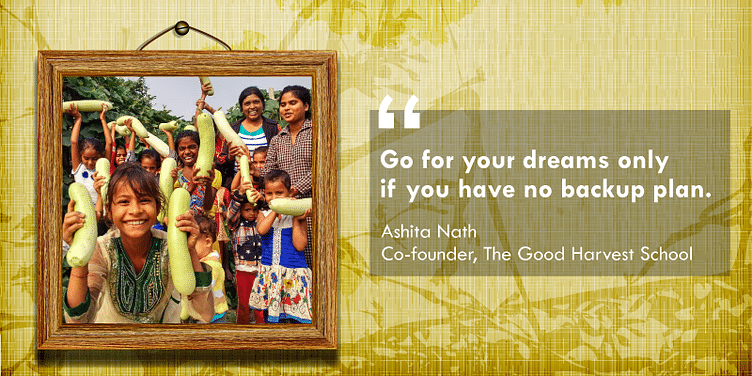 The Good Harvest School is a long-term effort to educate and champion the women farmers of tomorrow in hopes that they make the right choice both for themselves and the planet.

Ashita and Anish Nath made a surprising life change in 2013. After having lived and worked in Delhi for close to a decade, they quit their corporate jobs and returned to their home state of Uttar Pradesh to follow newer passions. Anish used to work in advertising and Ashita in a non-profit organisation. Back in UP, he started an animal farm and she began teaching in a school in Lucknow. They harboured no ambition to kickstart the phenomenal social change that this move eventually inspired.

While visiting Anish’s farm and interacting with the farmers, Ashita keenly felt the disparity in education levels between city and village schools. To make matters worse it was mostly the boys who went to school in the village. “Girls were held back at home to do household chores. Slowly, we reached a point where we couldn't ignore it anymore. So, we decided to open our farm doors to girls and give them the same quality of education as compared to city-based schools. And to create better opportunities for them in the future, we incorporated agriculture a subject in the curriculum,” says Ashita.

Why an agricultural primary school

It was observing the plight of farmers first hand that led to the inception of an agricultural school. “Spending four years in a village where farmers are discouraged and choosing alternative jobs to earn, we realised that agriculture is not a viable option for them anymore. We have farmers’ children who don’t want to dirty their hands. They prefer watching pirated movies on mobiles. Sadly, they are all set to sell the land as soon as they inherit. And then migrate,” says Ashita.

There was also another interesting chance discovery that made Ashita and Anish zero in on this concept for their school. “We found out that agriculture is not a male-dominated field. It is actually women who outdo men. From selecting seeds, preparing and sowing to transplanting the seedlings, applying manure and then harvesting, winnowing and threshing- women stay longer on the field than men. Yet we fail to recognise their hard work. The Good Harvest School is a small and a long-term effort to groom young girls from the beginning to make right choices. Whether it is about defecating in open or discouraging their parents to sell off the field. And we have to start early on,” says Ashita.

In 1989, the government released its first report on India’s women workers in the unorganised sector, of which agriculture forms an overwhelming majority. The findings stated that 85 percent of employees in the farm sector were women, be it as cultivators or daily-wage labourers. The report also discovered that women were equal toilers in traditionally men’s activities like transplanting, harvesting and threshing paddy, treading pulses and breaking stones. They did this in addition to performing their socially assigned roles of child-rearing and household chores. But to the Census, they were just ‘housewives’.

This prejudice continues today, as Mrinal Pandey points out in this searing article. The latest Census reports claim only 32.8 percent of women are primary agricultural workers while 81.1 percent are men. In these circumstances, founding India’s first all-girls agricultural primary school in a dirt-poor village in one of the poorest states in the country is a revolutionary step in balancing the scales of justice.

The Good Harvest School is located in Paschim Gaon in Unnao district of Uttar Pradesh. Anish selected the village of Paschim Gaon for setting up his animal farm because it suited the couple’s budget. When they were contemplating opening the school on the farm, they spent a year talking to the fellow villagers and the Pradhan (village headman).Ashita says, “We spent more than a year in planning and thinking about what sort of a school we want for these girls. We realised that most of the young girls in villages lack confidence. The reason behind having an all-girls team is to show them that good education can help them too in thinking beyond their restrictions. Our focus here is to help our girls start thinking. We provide a healthy and safe environment where they are free to roam around, share and discover.”

The school started in August 2016 with only six students. Today there are 25. The girls are between four and 14 years old. The school has four teachers, including Ashita and Anish. Volunteers from around the country also come to contribute at the school.

Since there was no precedent on which to base their model, Ashita and Anish went with a balance of creativity and necessity when designing the curriculum for the school. “Many of our students can’t even read and they are above 10 years of age. We consider each one’s learning level, interest, their readiness and pace to learn a certain concept and put them in different groups for different subjects. For instance, a girl could be in Level I for English but at Level IV for Math. Each month we assess our target and the progress of each girl and spend more time creatively with those who are lagging behind. But this model works with only a small group and that’s why we intend to keep a maximum of 20 girls in each class in the future,” Ashita explains.

She adds, “We don't push academics on them. It is important for them to feel safe and happy at the school. Whenever we enroll a new student, we have a long discussion with parents and try to understand their background. We have a good stock of play materials. We have cows, rabbits, ducks and plenty of greenery. But I think what really helped us is that we live among them. From Monday to Friday all of us stay at the school.”

And, of course, since it is an agricultural school, instilling sustainable agricultural values is at the core of this education. “We are not even sure how many will choose farming when they grow up. But we want to equip them well if they want to kick start their career in agriculture. We teach them sustainable agri-methods. Currently, our pupils are too young to fully understand the impact of their choices. But we are sure slowly they’ll get the big picture and give their best to protect the nature. We are trying to instill good agri-values early on and turn them into habits,” she says.

The seed fund for the school was raised by the duo on the crowdfunding site Milaap. They continue to depend on donations for survival. They have grand visions regarding the growth of the school but are taking it slow and steady due to the unpredictable nature of external financial support. For now, they will continue to operate the school till Class V. They do not charge any fees from the students. Their aim is to make the farm on which the school is run self-sustainable in the future.

Ashita says, “To be honest we are barely making our means. But at the same time, we are content when we see girls coming every day and learning. I don’t think we are making sacrifices at all. We are truly in love with what we are doing here and watching our girls growing and learning it pays off well. We never expected such good response from all our students. You won’t believe that recently when we all were discussing dates for winter holidays, they said they don’t want it!”