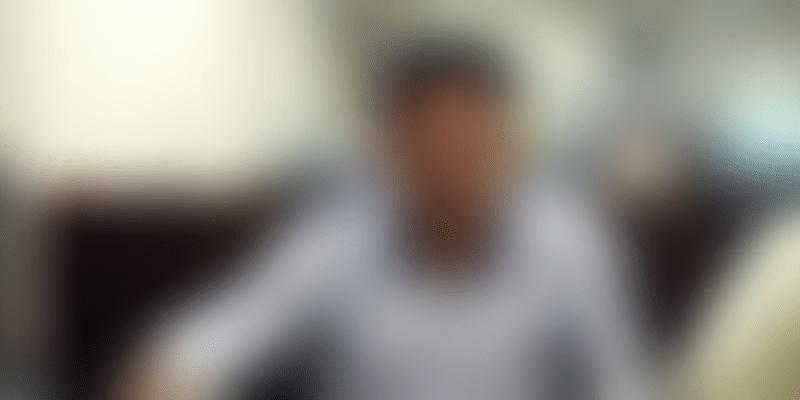 The Startup Weekend in Aurangabad last week was more than just an event; it laid the template for future engagement between academia and industry to foster entrepreneurship and innovation in small towns in India. Here's the story straight from the ground.

Namdev Anerao has travelled more than three hours by road to reach Aurangabad from his village in Beed district of Maharashtra.

It is an impromptu trip and he has had to quickly change his plans following a phone call from the Chamber of Marathwada Industries and Agriculture (CMIA), the local body of industries in the region.

Two years ago, CMIA had awarded him one lakh rupees to encourage his innovative spirit, and since then the association does not spare any opportunity to connect him to people who can help him realise his dream.

A farmer once, 34-year-old Anerao is on a mission to help his fraternity of small farmers who are unable to deploy large machinery and tractors on their fields due to the high cost of renting these and the relatively small size of their farms. A problem that is typical to most parts of agricultural lands across India.

He has developed a low-cost tractor that costs him Rs 35,000 to make and which he sells for Rs 65,000 as and when he gets an order. It takes him all of 10 days to single-handedly work on the product from scratch. He is awaiting a patent on his machine.

While he is working on his innovations, Anerao earns his livelihood in the construction sector fabricating roofs for houses. His father, meanwhile, manages their field.

Every time Anerao receives a call from CMIA, his hopes soar -- ‘Will I meet someone who will help me set up a factory to manufacture these machines?’ ‘Will this be the end of the struggle and the beginning of a new and exciting phase?’ ‘Is my dream about to come true?’

But like all those who dream impossible dreams, Anerao knowns in his heart it is the daily struggles that he overcomes that will finally lead him to the top. There is no helicopter ride to the summit.

It is the first time that Aurangabad has witnessed a Startup Weekend. An initiative by the Deutsche Gesellschaft für Internationale Zusammenarbeit (GIZ), a German federal enterprise that strives towards international cooperation, and CMIA’s incubator Marathwada Accelerator for Growth & Incubation Centre (MAGIC), the Startup Weekend was intended to foster entrepreneurship and innovation in small towns of India.

As many as 50 students and aspiring entrepreneurs had signed up for this intensive three-day workshop, from December 1 to 3, where they received hands-on mentoring and guidance on how to put their business ideas to work.

As a local innovator, it was only natural that Anerao was exposed to this in the hope that connections could be made and his story taken to more people.

Tasvvar Ali, the GIZ representative in Aurangabad, has a knack for spotting talent. He has been striving tirelessly to promote local innovation in the town’s many engineering colleges and create a bridge between the academia and industry.

He offers to help Anerao by making a formal presentation for his innovation and introduce him to various forums and associations that award local innovation. This is a big step.

Heart of the matter

The reason many local heroes like Anerao are unable to make a larger impact is perhaps the lack of exposure to the right ecosystem, which unfortunately is confined to metro cities like Mumbai, Delhi, and Bengaluru.

As part of YourStory, which has had a ring-side view (even participating in it) of the evolving startup culture in the country for the past nine-odd years and documenting its growth, I am fortunate to be witnessing the next chapter.

It is time to take the startup and innovation culture beyond the metro cities and away from five-star hotel conferences and panel discussions.

Speaking at the Startup Weekend event on igniting entrepreneurship, Rajeev Vaishnav, a startup evangelist, who is associated with industry bodies like TiE, said, “Unless we connect the smaller towns, the vision of Startup India will not be fulfilled.”

The story of Aurangabad’s Startup Weekend is thus crucial to understand how the various stakeholders right from academic institutions to local industry and government bodies to the industries themselves can achieve the vision of Startup India.

Among the 50 young participants, it was heartening to notice a fair amount of girls at the workshop. In the three days, they patiently heard speakers give them an overview of the entrepreneurship world at large, inspiring them to think big.

But the best, as many of them told me later, was the hands-on work they did on the Business Model Canvas (BMC) tool aided by mentors, who are entrepreneurs themselves, that made the most impact.

Nikhil Jois, Co-founder of Eventosaur, Mahendra Pyati, Co-founder of Aao Hostels, and Hemanshu Jain, Co-founder of Diabeto (acquired by Livongo), are no strangers to mentoring aspiring entrepreneurs, and have often been ‘partners-in-crime’ (if you know what I mean) with YourStory, travelling around the country to inspire youngsters to dream big.

According to Mahendra, “The spirit of entrepreneurship is in the air across the country and everyone wants to do something -- small or big. I think replicating some of the already successful models - small scale or social enterprise - will go a long way specifically for places like Aurangabad.” Hemanshu added, “It should be easy for them to even get an early acquisition from a big giant in that case.”

On the final day of the workshop, the participants pitched their ideas to the mentors. Though there were three winners, there were other pitches as well that impressed the judges. “I'd have to go with the locally made solar panels as my top pick outside the winners,” said Nikhil. “A couple of other memorable ones include - healthier home-cooked meals delivered in an easy-to-cook format, and the online nursery that delivers plants, flowers, manure etc., inclusive of a subscription model-based gardener package,” he added.

There were many agritech related ideas too, clearly indicating that the participants were thinking of solving their real local problems.

However, Mahendra observed that despite Aurangabad being a tourist destination, it was surprising that no one pitched a tourist-related business idea. He added, “I agree with Nikhil on the subscription model for plants and even gifts (one of the winners of the pitch); both of them can generate employment for the unskilled workforce. Another idea of cotton picking robot was also a great idea but scalability and design may be a question.” Hemanshu was impressed with an e-waste management pitch too.

Whether or not the participants who came together at the workshop will take their business ideas forward, the important point is that a spark has been ignited. And that, according to the mentors, was half the battle won.

One of the participants, Pawan Rochwani, who has founded a tech platform for artistes to help creative people get gigs, said, “This is the first time that something like this has happened in Aurangabad. Earlier, we would have had to go to Pune or Mumbai.” He added, “One of the mentors said that running your own startup is like doing an MBA, I totally agree with this.”

Thank you to the entire organising team and all the mentors who guided us at Start-up Weekend Aurangabad. It was a great learning experience. The prize is a boost for me to pursue my idea! @_AyushS @AnaghAjmire @DiptiDaveNair @hemanshujain @nikhiljoisr @Mahendrapyati https://t.co/VWXmmugMzF

People like Anerao, perhaps, would be double majors now considering the amount of on-ground work they do to get their innovation recognised. Interestingly, it is the passion to build stuff that drives him. In that sense, he is an artist, a creative soul, and if he could afford it, he would leave turning this into a business to others.

As his childhood friend tells me (he has accompanied Anerao to Aurangabad), Anerao has been ‘notorious’ in his village since his boyhood days for dismantling machines. Once he converted the kitchen mixer and grinder into a helicopter. “Woh 30 feet upar chala gaya, aur phir uska balance bigad gaya aur plug nikalke upar ke gir gaya. Meine 30 foot ka taar dala tha (it went up 30 feet as I had plugged that length of wire to it, but it lost balance and came crashing down),” he narrates as the room breaks out into loud laughter.

His childhood friend and another acquaintance are helping him raise money, and are realising it is no laughing matter. They have themselves put in a few thousands and are as eager as him to find the right partners to start production of the machine.

At the moment, even a loan from a bank is ruled out as he is asked for collaterals. Did someone say Mudra Loan Yojana? Anerao has been there and done that, and would rather not talk about it.

Like him, I met two other innovators: Vilas More from Paithan, who has made a disposable razor for traditional salons that continue to reuse unhygienic razors, and 19-year-old serial innovator Rohit, who is just looking for guidance and mentorship.

As we leave this city that houses ancient secrets of engineering and architecture among the rocks of Ellora, I only hope that stories of people like Anerao are not buried under but read and heard far and wide so that help is near.