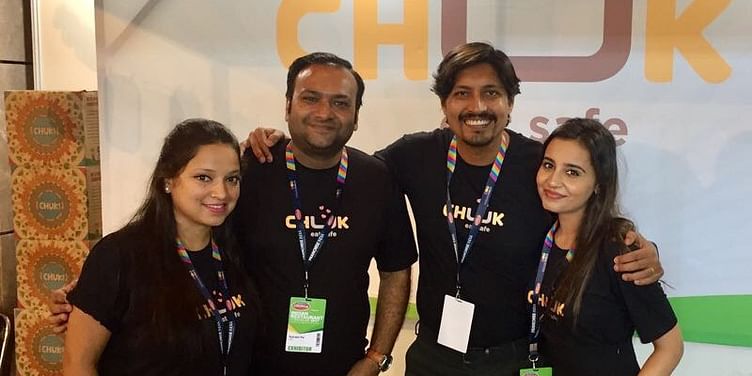 When Ved Krishna joined the family business in 1999, Yash Papers had a small factory in Faizabad, Uttar Pradesh, that made paper from sugarcane waste or bagasse. Starting out, Ved wanted to not only foray into specialised products and techniques at Yash Papers, but also build something for the society at large.

The company was set up by Ved’s father K K Jhunjhunwala in 1981, and when Ved joined Yash Papers, he worked on speciality products like pharmaceutical paper, medicated adhesive tape packaging, and takeaway bags for fast food chains like McDonald’s and KFC.

The real shift in operations, however, came around four years ago, when Ved saw that most paper used in packaging, especially food, was either plastic-coated, laminated, or covered in cellophane, and was harmful for the environment.

It was with this idea that Ved decided to start CHUK, with a special focus on bio-degradable packaging. The Yash Papers’ subsidiary manufactures tableware products made out of bagasse.

“After studying the market extensively, the company decided to keep the products brown, and untreated with chemicals, rather than making them white by treating them with chemicals. The products are more like Lego pieces, which fit into each other, and can be of multiple uses. The containers can be used as bowls or even trays,” says Ved.

The reason the team decided to use bagasse pulp is as it makes the products lightweight, flexible, microwaveable, and strong enough to prevent leakage. “CHUK products are 100 percent compostable and can decompose within months in backyard compostable systems,” says Ved.

He adds that since CHUK tableware is a new venture, the team is tying up with select vendors. Currently, it has over nine machines, and a production capacity of one lakh units a day. This, Ved adds can be scaled to 40 lakh pieces a day.

The company currently manufactures approximately four to five lakh pieces, and each piece ranges from Re 1 to Rs 7. Explaining why he believes CHUK to play an important role, Ved explains,

“Plastic products have become an integral part of our everyday life. Their utilisation ranges from toys to aircraft. As per recent reports in India, more than 15,000 tons of plastic waste is generated every day, of which 6,000 tons remains uncollected, littering the area. Moreover, packaging represents the single-largest sector of plastics use, and accounts for 35 percent of plastic consumption.”

He adds that the huge plastic use needs to be tackled at the grassroot level. Also, extensively studying the food consumption patterns in the country, the CHUK team decided that as part of the design philosophy of CHUK products, the aim was to create modular designs that are consumer friendly as well as biodegradable and eco-friendly.

The report, in fact, marks Asia-Pacific as the fastest growing region, and the growth will mainly be from China, India and ASEAN countries. However, one of the main challenges for tableware is that it is expensive.

While CHUK claims to be cheaper as opposed to the others, the main challenge for the company, according to Ved, is creating awareness about healthy and safe packaging materials.

The numbers and future

“In terms of manufacturing, we are aware that eco-friendly products do have their drawbacks in terms of sealing the products, risk of leakage etc. However, we have done extensive R&D and made necessary changes in our manufacturing process and technique in order to produce strong modular designs with quality that will be better than plastic,” adds Ved.

The team has tied up with restaurant chain Vaango, Hyderabad-based Paradise Biryani Group, Delhi-based Bitto Tikka, and food delivery company Foodpanda so it can recommend to partner restaurants.

According to its latest filings with the BSE, Yash Paper’s total income in FY17 stood at Rs 176 crore. The company’s net profit was at Rs 6.3 crore.

In a year of its launch, CHUK is eyeing a turnover of Rs 40 crore, with a plan to increase capacity by 60 to 70 percent. Speaking of the company’s future plans, Ved says,

“We will keep expanding the range of products and improve on the efficacy of the current products. We have developed a rapid development cycle for products based on 3D printing and quick tooling. We are able to go from scratch to production within 100 days. We have an excellent team of designers who work upon finding solutions all the time. We are sure the market will see a lot of innovations coming from us.”