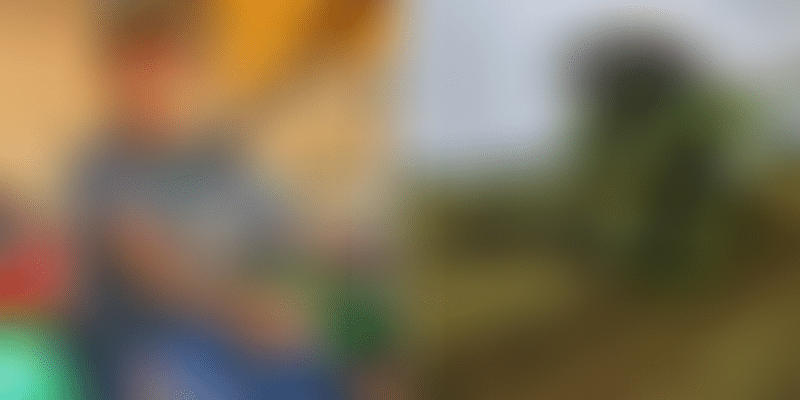 Launched in 2016, Oxen Farm Solutions aims to make farming a profitable and respectful profession through mechanisation, and access to farm equipment at an affordable price.

Uneven access to modern technology, smaller landholdings, non-availability of labour or increase in labour cost, and decrease in profit are some of the main reasons for the reduction in agricultural productivity in India.

With the aim to solve the labour crunch in the farming sector through large scale mechanisation, Vishwajeet Sinha founded Oxen Farm Solutions. The startup brings innovation and advanced technology to farmers at an efficient and pay per use ‘Farming as a Service’ (FaaS) model, similar to the Ola and Uber services.

Essentially, Oxen is bringing all the stakeholders — farmers, the farm equipment manufacturers, and the government policies — on a single platform.

Through its easy to use interface in the form of a mobile-based application, Oxen enables the farmer to place their requirements for crop cultivation. The machine owner receives the information and rents their services to the farmer through an affordable and transparent price mechanism.

In May 2015, Vishwajeet was working on a Euro-German government-funded project to understand the agriculture value chain innovation. The project was spread across eight states, from Kashmir to Karnataka.

“Everywhere, the farmer had the same challenge — labour availability. On digging deeper, I realised that the labour wages growth rate have tripled over the last 10 years causing labour costs to jump multifold for the farmer, while the farm incomes haven't risen commensurately,” Vishwajeet recalls.

The solution was mechanisation which, according to him, seemed simple but difficult to implement.

The European multi-million project that he was working on included engagement with some of the world's largest agriculture machinery manufacturers. They had the machineries which could not only solve this challenge but also help improve the productivity.

However, Vishwajeet realised that buying and operating farm machinery was not seen as a viable business for small farmers. The primary reason, apart from the high cost factor, was that a farm equipment was used only for a few weeks duration across the year, during the harvesting season.

“That is when Farming as a Service model struck us and the idea of Oxen was born,” he says.

His initial challenges were more personal, and involved convincing his family and letting go of the monthly pay check.

Calling former President Dr APJ Abdul Kalam his inspiration, Vishwajeet dreams of helping to build a Bharat where the young do not have to migrate to cities; where they find life, livelihood and passion right at the heart of their own community in the village.

Oxen aims to revolutionise farming through farm mechanisation by providing access to advanced technologies in a tech enabled, efficient and pay per use model. They provide equipment for a range of services including crop residue management, land preparation, planting, crop management, harvesting, and post-harvest processing.

“We reduce labour costs by up to 50 percent for the farmers. This means, farmers love us and we have to make minimal effort in sales and marketing,” he says.

Citing an example, he says that the tribal communities in Chhattisgarh who have benefitted from their services are their most satisfied customers. “As they say in rural India ‘Chamatkar ko hi sab namaskar karte hain’, so the first farmer is the only sell we have to make. Rest is chamatkar and namaskar.”

Further, he says that wherever they go they are met with happy farmers for they help the agri community with harvesting services. Additionally, harvesting time is festival time in rural India since the farmers bear the fruits of their hard work.

Oxen is using IoT to gather information from sensors in machinery and generating valuable data on machinery performance. It uses satellite imagery and big data analysis to analyse crop health, crop progress, and harvesting status. Lastly, it uses mobile-enabled solutions to capture crop data to assist farmer in harvesting the right crop suitable for that land.

Vishwajeet is aware of the vulnerable state of agriculture.

“Climate change is the biggest risk that Indian agriculture faces today. Recent rains and hailstorms in Madhya Pradesh and Maharashtra are an example how vulnerable the business is to extreme climate events. Droughts over the last few years have made the farmer suffer like never before,” he says.

He hopes that technology will empower and enable a farmer to harvest crops according to the weather and soil temperament of the land.

Further, through data-focussed tech-enabled FaaS enterprise, they equip the farmer with a decision support system that would include climate-related analysis. This sharing-economy model has reduced the cost of harvesting by half — Rs 1,800 per acre as opposed to the cost of manual harvesting which costed approximately Rs 4,200.

By mechanising the operations, Oxen is reducing the time taken — from field to store or markets — as sixty hours of manual work can be completed in one hour through machines. The startup also aims to promote the local youth and women to take up micro-entrepreneurship by training them in skilled and semi-skilled operations.

Oxen has launched its first mobile application 'Kombine' that helps a machinery owner and the farmer measure their farm area accurately. It is also working on applying GIS-driven machine learning to analyse terabytes of high resolution satellite imagery.

“As we crossed 8,000 acres in services in just a season, we have high accuracy data across multiple states, crops and agro-climatic zones. As we scale up, data comes naturally to us,” he adds.

Oxen’s client base includes multi-national corporations such as PepsiCo and Yes Bank.

Citing an example about the value chain offered by Oxen, Vishwajeet says, “Despite having relationship with Grimme, a large German potato machinery manufacturer, PepsiCo faced challenges in mechanising the potato farms. There was a gap for a professional company that could pitch in with the machine and deliver on the ground. Oxen came in handy, took up the challenge and in just one year we are working with them across two states —from sowing to harvesting.”

Oxen has raised funds and was incubated by IIT Kanpur; later it even collaborated with Pranab Mukherjee Foundation. The Oxen team comprises of individuals who have experience in technology and agribusiness.

“We are comfortable with rolling our sleeves and negotiating prices with a machinery owner alike. As we raise funds to scale up, we will expand FaaS part of the business by adding more geographies, services, and machines,” Vishwajeet adds.

Today, the company has harvested over five crops across 8,000 acres of lands, connected with 5,000 farming families and have worked across three states.

“We have achieved the highest capacity utilisation factor when compared to our competitors, besides building the tech from the ground up. In less than six months, we met the milestones committed to our investors and are now gearing up for next-level scale up in terms of tech and market,” Vishwajeet shares proudly.