From ‘black board’ to ‘digital board’, Government schools in rural India are witnessing a technological revolution 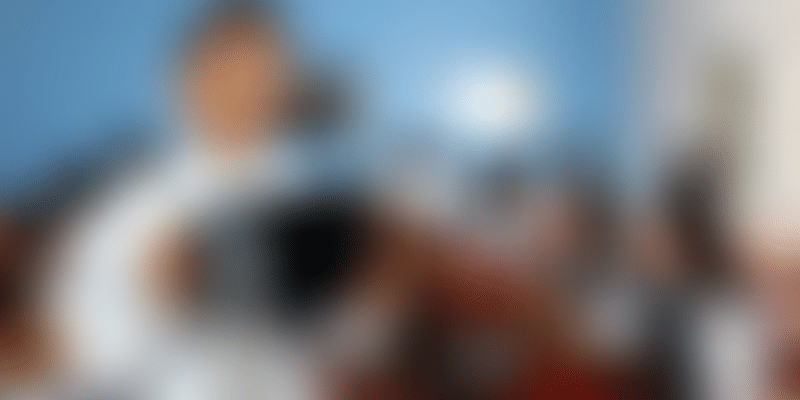 Since 2013, the Jawahar Navodaya Vidyalayas, through collaboration with the multi-national corporation Samsung, have not only provided access to digital learning to over 2.5 lakh students but also trained 8,000 teachers to use interactive technology.

A 15-year-old Class XI student, Simran Choudhary has developed a ‘Password Management System’ mobile application which helps users to store their passwords and avoid theft of data. Like many other similar mobile applications, this platform helps to access all their accounts through one password. The unique story of this app development lies in the struggles of young Simran, a student of government-run alternative school Jawahar Navodaya Vidyalayas, who was introduced to computers and digital learnings only in Class IX.

“I belong to a middle-class family from the outskirts of Bihar and have never had access to gadgets and equipment like a laptop, tablet and had no computer programming knowledge. Initially, when I joined the school, I was hesitant to use these devices due to the preconceived notion that I was not good at technology. Gradually, I realised this is not difficult, which increased my zest to learn,” she says.

Another student Aakash Karn, who comes from an underprivileged background, used the facilities and technology available at the school premises to develop an Android application called ‘Call Manager.’ The app acts as a safety net in case of any emergency caused by theft, abuse, natural disaster, or even stalking.

He says that access to digital learning and computer knowledge helped him expand his horizons, understand the nuances of app making, and eventually, motivated him to develop an app of his own.

Similar stories today echo across the 500 branches of Jawahar Navodaya Vidyalayas, where over 2.5 lakh students have accessed digital learning.

The government schools in India, over the past years, have all but developed a good reputation. The common complaints range from inadequate facilities including access to computers and digital technology to the quality of teachers present, among others.

In an attempt to disrupt this trend, the Jawahar Navodaya Vidyalayas, — the government run alternative schools primarily for children from rural parts of India — are on a mission to provide access to quality education through digital learnings across its 500 schools.

“Students at JNV, especially those from rural areas, have limited exposure to the latest technologies. With the Samsung Smart Class, students are more confident about using technology and that is helping them learn better as well. It is also placing them on a comparable platform with urban counterparts for accessing similar education, and eventually, employment opportunities,” says GS Tomar, Principal of the Dadri-branch of Jawahar Navodaya Vidyalaya.

Since 2013, the Jawahar Navodaya Vidyalayas, through collaboration with the multi-national corporation Samsung, have not only provided access to digital learning to over 2.5 lakh students but also trained 8,000 teachers to use interactive technology.

The programme aims to bridge the digital gap in education between rural and urban India, and provide equal opportunities for quality education to children from all backgrounds.

The Jawahar Navodaya Vidyalayas partnered with Samsung Smart Class, the company’s flagship citizen programme in India, with the aim to promote digital education among underprivileged students. The idea behind this initiative was to bring students closer to technology and use it to improve learning methodologies and outcomes.

“With the use of interactive modules such as videos, and presentations as a medium of learning, students get to understand complicated concepts with ease. It has helped in increasing their interest and curiosity level. What we have also seen is that they do not want to miss a class that is held inside the Samsung Smart Class. They love coming here. They have learnt how to make presentations, their confidence level has gone up,” Tomar says.

Samsung believes that this programme is an example of their testament, “dreams become bigger when people and technology come together.”

However, the implementation of this digital interface had its own challenges. The company wanted to connect with a school which had a pan-India presence.

"Since we took up a school system like this, physical accessibility to these schools in interiors of India, in hilly states such as Himachal Pradesh and also in the North East of India, was a challenge. Sometimes, for equipment to reach schools, we had to adopt multiple modes of transport, which included carrying equipment on mules to get through the last mile,” he adds.

Over the last three to four years, there has been a marked improvement in road infrastructure in rural areas, which has made physical accessibility to these schools better. When the programme started in 2013-14, internet accessibility in interior parts of the country was poor. However, Deepak says that there has been a shift and the past four years have witnessed better broadband connectivity with the government’s enabling policies of Digital India, Make in India and Skill India.

These digital classrooms have helped increase student attention; teachers maintain that there has been a reduction in absenteeism and school dropouts. It has also improved student familiarity and comfort with technology. The digitally interactive environment encourages even shy or hesitant students to participate better in classroom discussions.

Dreaming of becoming an IAS officer when she grows up, Simran says, "At my earlier school, the teachers used textbooks and blackboard to explain subjects while here the education is via videos, pictures, and presentations. Learning is now more exciting and interesting. My favourite is an audio-visual description of any topic. It gives more clarity on the subject; the pictures and videos shown to us help us in remembering it even after the class.”

Tomar concludes, “For any school, the students’ success is of utmost importance. More students are participating in extracurricular activities, highlighting the rise in their confidence. This clearly indicates the programme’s acceptance and importance.”