Startups, selfies, and selfless friendships: what a German intern learnt in one month in India 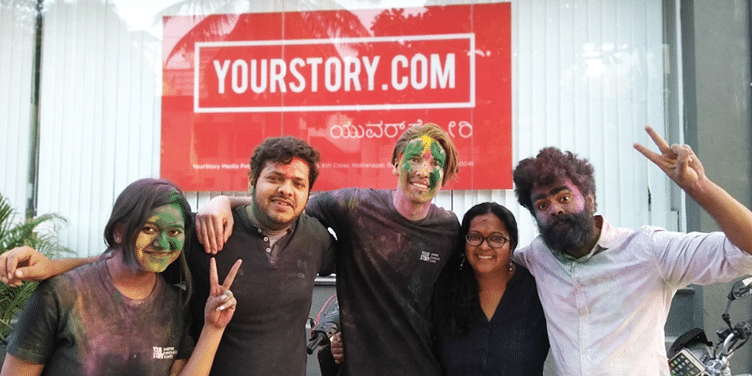 Nineteen-year-old Lorenz Oswald, a German intern at YourStory, gives an account of his experiences in the country, and the learnings he had from the Indian startup ecosystem.

I am Lorenz Oswald. I am 19 years old, and living in Bengaluru, India, since the beginning of February. After graduating from school, traveling across Europe and getting some work experience in Germany, I decided to move to India to start an internship with YourStory in Bengaluru.

I could have chosen Australia, like most other students from Germany, but I took the risk and came to India. I was very curious about the entrepreneurial scene in the country, and Bengaluru, also called the ‘Silicon Valley of India’ because of its flourishing startup ecosystem, was a natural choice.

This internship with YourStory, the number one media enterprise for entrepreneurs, will give me valuable experiences for my future. It’s just been one month, but I feel so inspired, like never before, to start writing about my experiences in India, to share them with everyone, including those in my country, Germany, through YourStory Germany.

Impressions about India and its startup world

Indian culture and its people are known the world over, and I got to experience it firsthand from Day One. The country is warm and welcoming and most of the people are very open and kind. I came here in February and within a day I felt at home. A colleague heard that I was searching for a room to stay in and even offered me his place. Another colleague took me along to play football with his friends on the very first weekend.

On my first day in India, I attended an important meeting. It took me awhile to understand the way English is spoken here but I eventually got the hang of it.

Today, after one month of experiencing India, I realised that making connections is the most important thing in business life. The main reason so many events are organised in the city for entrepreneurship is that if one wants to start up one needs the right connections to investors, for funding, and to other entrepreneurs, to create partnerships. Without these events, business ideas will go nowhere.

The startup ecosystem in India is booming. It has more than 20,000 startups, the average age of founders is 28 and it is a $2.3 trillion economy. Most Indian students are dreaming of founding their own startup. I am deeply impressed by the whole startup movement here.

Unfortunately, there are lots of sad things too about India that need fixing. The large-scale poverty, and the yawning gap between the poor and the rich are the main problems. I couldn’t relate to that gap.

On the one hand, you see big luxurious hotels, houses, companies and shopping malls. And, one the other, you see poverty everywhere. I saw a young girl lying on a dirty traffic island between two big roads, holding a baby in her arms, both of them unclothed and uncared for.

This made me feel very sad and depressed. But there is hope, as education is known to be the great leveller, and it is heartening to see many social enterprises cropping up in the education sector in the country.

In February, a German delegation, intending to understand the startup ecosystem in India, flew down for an event organised by the German Startup Association and YourStory. I am happy that I got a chance to participate in the event, which was held in Bengaluru and Delhi.

We went to the biggest and most important startups of India. We visited BigBasket, Ola, Flipkart, Juggernaut, Fabindia, StalkBuyLove and Paytm. I found all of them very interesting and impressive. But online fashion store company StalkBuyLove impressed me the most as they gave us a chance to visit their garment factory. Their philosophy to only focus on bestsellers has proven to be very effective for the firm. During the tour, I was amazed to see the control of their system.

The German India Week presented a lot of opportunities for me, which I am happy to say I took advantage of. I made some good friends and networked as well. The official German Indian Startup Exchange Program (GINSEP) launch event, for instance, was a lot of fun. I learnt a lot and was grateful for all the advice I got that week.

The day after the event wrapped up, I booked a day cab on Ola Outstation and went to Agra to visit Taj Mahal, one of the seven wonders of the world. After 4.5 hours of driving, I arrived at the monument.

There are three takeaways from that visit: the architectural magnificence of the structure, the surging crowds India has in a place like this, and the calm and serenity I experienced there despite the hustle-bustle.

After my visit, I can definitely say that it was the right decision to call the Taj Mahal one of the seven wonders of the world, because it is the most beautiful building I ever visited in my whole life.

A funny thing happened while I was at Taj Mahal; a lot of people wanted to take selfies with me! I felt weird at first, especially when two men approached me, saying, “We want a selfie with you because you are very hot!”, but I later understood that this is a common phenomenon here. A colleague told me that taking pictures with Caucasians is exciting for some Indians, and I learnt to laugh it off.

I have managed to accumulate a lot of practical experiences in my internship so far. Within a short while of being here, I started to manage the YourStory Germany Facebook page. I wanted to help increase the traffic on social media and suggested a useful Facebook tool.

I translated important articles on the German India Week into German. Additionally, I learnt useful stuff for online traction, like search engine optimisation (SEO) hacks. I managed to find some mistakes in the algorithm of the website, which now are being corrected.

I am very interested in sports business and sports startups, so they gave me the chance to meet two sports startups. The first one was Gamtastic, and the second one, which I interviewed and will write about soon, was SportsKPI. The manager there invited me to a Bengaluru FC football match. This is another great example of the warmth people in India shower on visitors.

One month may seem like a short time to get to know people, but I have managed to make some friends for life. The country itself has left a huge impression on me, and I can safely say I have fallen in love with India.

India has been an eye-opener for me, especially when it comes to familial relationships. Most Indian families live together their whole life, something that is starkly different to how things work in Germany, where children move out of the family home when they are 18-22 years, and visit their parents once a week or month. A colleague with whom I was staying had his family, which stays in another city, visiting. His parents, grandmother and his little brother did not stay at a hotel, and all chose to sleep in his room. That’s some real closeness.

Just like familial relationships, friendships are given top priority in India. On the first of March, the country celebrated the festival of Holi and it was heartening to see YourStory folks coming together as a family and celebrating the day. There was lots of good food, music and palpable happiness on display. This itself is representative of the country, which thrives on solidarity.

In most German offices, every employee is focused on one’s own work and they have their friends outside of the office. There is a separation of work and private life. That is not so, as far as I could see, in India. This, in turn, makes for great teams in Indian companies.

Internships - the perfect bridge between India and Germany

In sum, my India trip proved to be a perfect launchpad for my working life. I learnt so much and experienced many different things. Internships, I believe, will go a long way in creating a bridge between Germany and India. The countries have a lot to learn from each other: Germany, with its manufacturing prowess and operational success, and India, with its culture, huge market, superiority in tech and software development, and a general team spirit displayed in its workplaces.

There are things to be ironed out as well. The visa process, for instance. I had to apply for a tourist visa, because it is so difficult to get an employment visa for India. Since it takes so much time, no one is able to make short-term decisions to travel to India. At the same time, lots of employment visa applications are getting rejected. The same applies for Germany as well.

The visa process was a big topic of discussion at the meetings between InvestIndia, the German delegation, German and Indian politicians, and Indian startup stakeholders. Both countries made promises to do as much as possible to change visa application rules.

As for me, I will leave the country bursting with practical knowledge, and fond memories of a culture and people that was constantly giving.