This 24-year-old Hyderabadi feeds 1,000 people every day before having his own breakfast 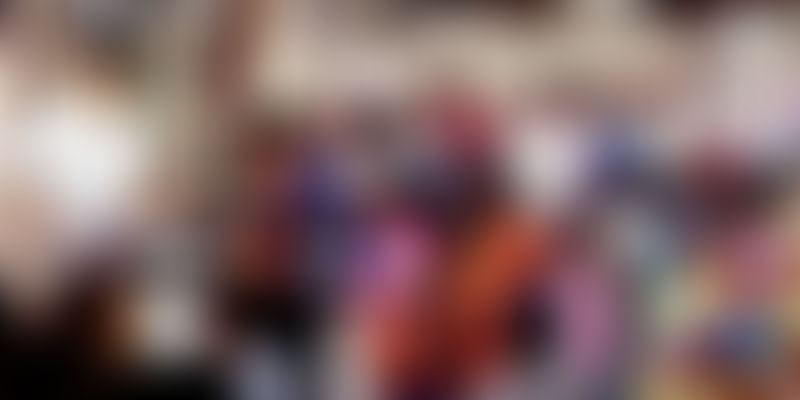 A typical college student is jolted awake every morning after staying up too late the previous night, and has to groggily hurry through a quick breakfast before heading for classes. Mohd Sujathullah, however, plays it differently.

He kicks off every morning by feeding breakfast to around 1,000 people and then the 24-year-old sits down to eat his own meal and start the day.

Sujathullah wakes up early and leaves his house around 7.30 am every morning. He reaches Koti Maternity Hospital in Hyderabad, where 300 poor patients have already queued up and are waiting for a meal. Within 15 minutes, he, along with a volunteer or two, finishes distributing hot raw upma to them and proceeds to his next destination. At Nilofer Children’s Hospital, another 700 people on an average are waiting with empty bellies to get their own bowl of breakfast after spending a restless night on the footpath of this government hospital.

“About 90 percent of the people who come to government hospitals hail from small districts and nearby villages and are poor. Due to lack of facilities, they sleep on the road and go without a morning meal as well. I wanted to give them free food that we eat and started by distributing raw upma in desi ghee to these patients,” says Sujathullah.

For 485 days now, this routine has become a part of his daily schedule, irrespective of bad weather, poor health or other unforeseen reasons, and he does not fail to show up at both the locations every morning.

A moment of eureka

An average student at school who had learning difficulties early on, Sujathullah went on to pursue Bachelor’s in Pharmacy from Sultan Ul Uloom College, Hyderabad. Raised in a joint family of 25 members, he grew up experiencing the joy of sharing. But the true happiness one can derive from sharing, especially with the lesser privileged, did not hit him until the day he decided to feed 10 people if he passed a college exam.

Having successfully cleared the exam, Sujathullah decided to follow through with his plan. On reaching the Secunderabad railway station, where he wanted to distribute the food, he understood what food really means to people.

“There was one kid pulling my shirt , the others waiting patiently with glimmering eyes. I realised what bhookh (hunger) really means. I had never felt a sense of such deep contentment as I did after feeding them,” recalls Sujathullah

He then returned to his house and convinced his family to dedicate one day’s earnings in a month for this cause . Seeing passion and determination in his cause, his family came forward to help him start distributing food three to four times a week to around 150 people.

“People living in comfort hardly realise the pain and suffering of the hungry and the malnourished. My intention is to give the food we eat to those less privileged, and to ensure this we get a nutritious meal made in pure ghee from a three-star hotel in Hyderabad ” says Sujathullah.

With a daily expense of Rs 3,500, he now feeds 700-1,000 people every day around the hospital premises. During the summers, Sujathullah organises frequent water camps, and in winters conducts blanket distribution drives.

Moving up the ladder to scale and formalise the events, Sujathullah established Humanity First Foundation Hyderabad, a non-profit, non governmental organisation in 2016, and initiated new projects alongside his free food drive.

The most remarkable one is Project Transformation, an initiative to transform the lives of those who are left abandoned on the streets, or who reside on the dirty footpaths on Hyderabad roads. Sujathhulah persuades the footpath dwellers to reform their lives and also provides them necessary support in cash and kind for their makeover and rehabilitation.

“After necessary counselling , we provide them a ray of hope for a better living. We have collaborated with old-age homes, and if they are convinced, taking police permission, we transfer them to the shelter homes where adequate care is given,” adds Sujathullah.

With the support of donors and volunteers, they also conduct regular medical camps at slums and distribute free medicines post check-ups.Visits to orphanages, homes for the differently-abled, ration distribution are other activities undertaken by the organisation to promote social welfare in and around areas of Hyderabad.

The foundation is running a crowdfunding campaign for various community-oriented social projects. The goal is to create and promote a culture of service and generosity.

Undeterred by the obstacles, Sujathullah stands tall in his conviction and sets a good example for the millennials to rise above the everyday challenges and selflessly serve those in need.