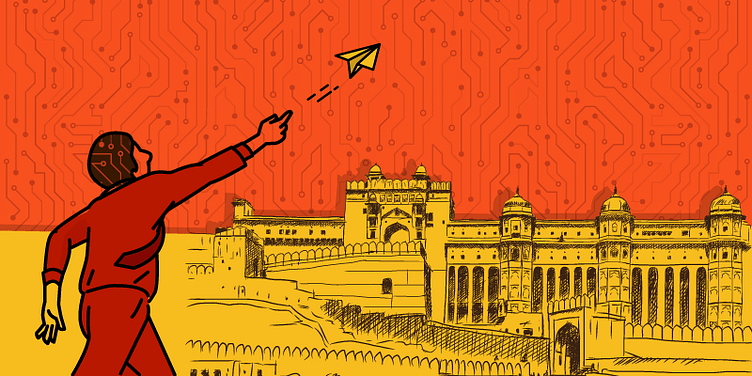 Rajasthan…the very mention of that name conjures up images of colourful murals, dazzling mirror-worked garments, camel rides amidst arid dunes, and palaces and forts that have withstood the ravages of time. Traditionally known for its tourism, hospitality, arts and crafts sectors, Rajasthan was behind the pack compared to other Indian states in terms of the development index. But since 2015, the government of this Western state has begun to change the image – from a tourism-oriented state to one where tech-driven entrepreneurship also thrives.

The state government has registered close to 750 startups and introduced multiple policies and funds for their benefit. In 2015, it launched the Rajasthan Startup policy to improve ease of doing business for new startups. This provides a sustenance allowance of Rs 10,000 per month for one year to the startups at the idea/prototype stage, and marketing assistance of up to a maximum amount of Rs 10 lakh for startups to launch their products.

Funding and more to strengthen the ecosystem

Most recently, in February, the state government launched a framework through which it would provide loans and equity funding from its Startup Fund of Rs 500 crore. The state government also encourages investment by providing assistance of Rs 50 lakh to companies/venture capital funds and angel investors for setting up Incubation Centres, which can provide workspace, seed funding, mentoring, and training.

e of Rs 10 lakh to reputed incubators and angel investors for operating accelerator programmes. In fact, at the Digi Fest held in Kota late last year, about 50 VC funds and angel investors pledged to invest in iStart-endorsed startups. Raising funds is always a challenge for startups. While angel funding has been forthcoming and effective in helping a number of startups in Rajasthan, the ecosystem is ready to absorb more capital infusions. In the recently announced Rs 500-crore Startup Fund, there is a funding cap of Rs 25 lakh per startup. The amount will be based on the ranking of the startup. iStart ranks startups in Bronze, Silver, Gold, Platinum and Signature categories. Bronze and Silver startups will get a maximum of Rs 15 lakh, Gold and Platinum get a maximum of Rs 20 lakh and Signature startups get a maximum of Rs 25 lakh. A Government representative will sit on the Board of Directors as well. The Fund will provide both loan and equity to startups that are registered in Rajasthan based on recommendations of the committee set up for this purpose. In due course, a Rajasthan Startup Village of sorts or an e-platform may be set up, which can also host a cloud server for startups, run online courses and coordinate with government agencies to further strengthen the startup ecosystem in Rajasthan. To better understand the ground reality of the impact of these policies, YourStory spoke to a few startups based in Rajasthan.

Rajasthan has had the historical and geographical advantage of a vibrant art and crafts sector. It also has an advantage in the area of Ayurveda as it has access to special herbs that grow only in arid conditions. Many newly set up businesses in Rajasthan are traditional family businesses taking the modern route – like offline retailers entering e-commerce.

According to Anupam Arya, co-founder and director of Jaipur-based ecommerce platform Fabriclore, traditional enterprises are now reinventing themselves with a better brand identity. He believes that Rajasthan should leverage traditional sectors such as art and craft, Ayurveda, and spices, among others, to ensure that the state’s inherent strengths are not lost on investors.

Payment gateway startup Razorpay’s co-founder and CTO Shashank Kumar believes that Rajasthan is among the more forward-looking states when it comes to a startup policy focused on IT. Founded in 2013 out of Jaipur, Razorpay, as a B2B company, was primarily targeting internet businesses, which are concentrated in Bengaluru and Delhi. It eventually moved to Bengaluru to leverage long-term benefits. That was before Rajasthan’s Startup Policy was formulated.

Today, Shashank appreciates that unlike Delhi and Bengaluru, where non-governmental bodies like NASSCOM actively support startups, Jaipur has a great ecosystem that has been built completely by the State government.

Gaurav Mundra, co-founder of EduCommerce Technologies Pvt Ltd, an edtech startup, applied to the iStart program with the intent of gaining assistance and mentorship, investor connects and an opportunity to work with the government. “iStart’s assistance schemes are well designed. Mentorship by the Applyifi team is great. Prajakta (Raut), co-founder of Applyifi, is a great mentor and is always looking to enhance the value provided by our app. We have applied for the Bhamashah Techno Fund loan scheme and are waiting to see if we have qualified.”

Ravi Santlani, co-founder of Scoonews, a media platform for the education sector including print, online, online TV and events, said, “iStart got our business fundamentals in place. Qrate (a part of the programme) is an amazing initiative from the government and Applyifi and is the secret weapon in increasing our odds of success more than almost anything else.” Scoonews enjoys other benefits such as AWS credits and free access to Rajasthan Stack (a set of APIs that lets governments, startups, developers and businesses utilise the unique digital infrastructure on which to build solutions. Both ScooNews and EduCommerce are Gold-rated startups.

The cost advantage over Tier 1 cities

While the likes of Infosys, HCL, Genpact, among others, have been present in Rajasthan for a few years now, Jaipur is not home to corporates the way metros are. While senior level talent may not be available like it is in Bengaluru or NCR, primarily because Rajasthan’s startup ecosystem is barely a couple of years old, the state offers a huge cost advantage over other startup hubs. Says Vishwas, “Jaipur definitely has the cost advantage – operating in a Tier-II city, which is well connected and has a cosmopolitan culture.”

As such, there are instances of startups moving into Jaipur after having set up their base someplace else. Ecommerce platform Voylla started up in Bengaluru in 2012 and moved to Jaipur in 2014 as their jewellery manufacturing business demanded it.

“We knew that manufacturing will work out here.” recalls Vishwas Shringi, co-founder and CEO of the omni-channel jewellery platform. To boost tech and marketing, they got newly graduated IITians and regional graduates on board and groomed them in-house.

He adds that many Jaipur-origin graduates are ready to come back home from metro cities for the right opportunity. What’s more, small businesses targeting the national market can leverage being in Jaipur’s low-cost environment, which also has great infrastructure and connectivity, he points out.

Voylla and automobile search and comparison platform CarDekho grew from a few people to more than 1,000 in Jaipur, which definitely motivates some others to feel that they can also do it in the state’s capital. The cost advantage outweighs any disadvantages. “Compared to Delhi, we save at least 30-40 percent lower costs. Connectivity is also good, with decent roads and air transport,” adds Pushpendra Sharma, CEO and founder of hotel aggregator platform HotelDekho.

Fabriclore has an office in Gurugram for marketing, etc. but remains based out of Jaipur. Another example is travel and leisure platform, Thrilliopilia, which also moved to Jaipur from Bengaluru. Co-founder Chitra Gurnani, originally from Jaipur, now runs the startup out of Startup Oasis in the city.

The Rajasthan IT Day celebrations, organised by the state Department of IT & Communications, is being held between March 18 and 21. The event is part of the government’s extensive plan to ensure that tech-driven startups get everything they need to flourish and scale. Check out the full agenda here.

For a state with a startup policy that’s less than three years old, Rajasthan is pulling out all stops to ensure that its entrepreneurs lack for nothing. As a result, its startups span almost every sector, from ecommerce and edtech to analytics, mobile apps, IoT and robotics. Quite a feat for a state where tourism, agriculture and mining accounted for the bulk of the economy until recently.

(With inputs from Sameer Ranjan)