Rooted in her strong passion to do impactful work, Shalini Santhosh started Early Foods to provide organic, fresh and chemical and preservative free food to children. This is her #PassionToPaycheck story.

These are sure to strike a nostalgic note with anyone familiar with the Bangalore of yore. But today, most of these, with the exception of filter coffee, have been reduced to just childhood memories, especially for those like Shalini Santhosh who grew up in the city.

She says, “I grew up in a middle class family in Bangalore. The conversations over a cup of freshly brewed filter coffee revolved around people who were making a positive impact through their work. My parents didn’t save much because they believed in investing in my education. They wanted me to be among those who were doing impactful work.”

Every Thursday, they would get a Kannada weekly from which her mother would read aloud pieces on innovative farmers, women entrepreneurs, environmental activists, and other articles on health, food, and environment. These early experiences subliminally created a desire in Shalini to make an impact.

A few years later, after completing her engineering in Metallurgical & Material Sciences from NIT Trichy, Shalini began working as a Business Consultant for ZS Associates, a global sales and marketing firm. She then moved on to lead the data analytics team at eClerx, a knowledge process outsourcing company based in Mumbai. “My work was all about strategising and solving sales and marketing challenges using insights from Big Data analytics, market research, statistical modelling and simulation.”

A thought that catalysed change

Shalini’s career progression was going well.. But a discourse with her spiritual masters soon changed her perspective. In one of the discourses, the spiritual master spoke about how a work can be considered rewarding only if it inspires you to do more work. A bonus, a pay hike, a promotion, were not the criteria to judge if the work was rewarding or not. That struck an immediate chord with Shalini. “I realised I didn’t have a fire in my belly. I wasn’t creating a social impact either. I wasn’t sure if a promotion would make me excited. I realised I had to take a detour if I wanted to do work that was rewarding and would create a visible impact.”

But only after she became a mother could Shalini translate these thoughts into action.

She says it was during her maternity leave that she began to contemplate doing something on her own. “My nights became longer. Not only because there was a baby to take care of, but because I no longer wanted to go back to a regular day job. I knew I wanted to become an entrepreneur. So, I began reading about successful startups, business leaders, their journeys, and strengthening my resolve every day.”

How she arrived at her startup idea

When her son turned six months old, she began to introduce solid food in his diet. But she constantly struggled to find readymade wholesome and healthy baby food. What was available in the market consisted of refined cereals and had sugar, salt and preservatives. In spite of super foods like millets, dry fruits & seeds being available in India, the key ingredients in most commercial baby food were limited to rice or wheat. Traditionally in India ragi and other millets were sprouted, dried, and ground to make homemade weaning food. But, this was time and effort-intensive to make at home. ”Browsing through parenting forums on social media, I realised the enormity of the struggle, and also that I was not alone. What amazed me even more was that no baby food company was addressing this critical gap.”

The reality compounded by uneasy questions, compelled Shalini to contemplate. “It dawned upon me that I had a viable idea which could be my startup venture. Rooted in my strong passion to do impactful work, a strong-understanding of the problem statement and the solution, Early Foods began its journey in September 2015 within the four walls of my home in Pune,” she says.

Early Foods and why it is popular among Indian mothers

The company operates on two non-negotiable principles. The first is that every product will be made using ingredients that were once a part of traditional recipes from modest grandmothers’ kitchens across the country. That means, no refined flour, sugar or corn syrup, no processed sugar, no hydrogenated fats, no soda, baking powder or any raising agents, no artificial nutritional supplements like calcium, zinc, Vitamins A or B, no artificial flavours or preservatives. “We use 100 percent whole grain flour, cow butter, jaggery and dates as sweeteners and our good old millets, dry fruits & seeds to power up the nutrition value,” explains Shalini.

The second guiding principle is that all food has to be fresh, not something on the retail shelf made five or six months ago. “Today, the e-commerce model has made it possible to deliver freshly-made porridge mixes and cookies to customers in three to five days once the order is placed. In the retail stores, where we do get some shelf space, we strictly mandate the retailer to remove products older than three weeks.”

Today, Early Foods caters to over 2,000 orders a month. Their annual turnover for FY 2017-18 is likely to touch Rs 3 crore. Early Foods retails from its own online platform, is available on e-commerce sites like Amazon India, Firstcry, BabyChakra and BabyGogo, and also finds a place on the shelves of premium organic stores in Bangalore, Mumbai, Delhi, Ahmedabad and Surat. They also export to the US to cater to the demand of a large number of Indian-origin Americans. Most of the growth is organic, driven by word-of-mouth publicity and feedback on social media.

But this wasn’t always the case. When Shalini started Early Foods, it was challenging to get people, especially new parents, to trust what was then an unknown brand. She got her first customers from within her network of friends, families, and acquaintances. Once they were convinced about the quality of the product, the word-of-mouth publicity did wonders. Shalini says, “A recommendation by a mother is something that another mother will put her faith on, more than commercials or other forms of advertisement. And, that’s what has driven our growth.”

Shalini says, “We wanted to grow at a pace where we could learn along the way. I stay in Abu Dhabi, and my team works in India. We work out of a bungalow in Pune, with eight women making all the Early Foods products. Each of the products is made on-order. My mother supervises all the operations and the quality checks. I am supported by a few other mothers who work part time from home and help in areas of accounting, networking with retailers, invoicing, checking delivery and dispatch, social media, blogging, and video production as well.”

2018 will mark a shift in their growth strategy now that they have built a strong product portfolio, as well as strengthened their business and operations pipeline. “Now we want to focus beyond just organic growth. We are keenly exploring how we can market Early Foods and grow faster,” she says.

Life as a mompreneur

As a mompreneur, working remotely hasn’t been a challenge for her, because of the many avenues to stay connected. She devotes time to her entrepreneurial venture after her active toddler goes to sleep. “I work late nights. I am able to focus and get my work done,” she confesses.

A first-generation entrepreneur, Shalini says, “As the founder & CEO, you become single-handedly accountable for everything, at least in the early years of a startup. You need to manage aspects such as expansion, accounting, taxes, payments, procurements and quality assessment etc. all alone, with a small team to help. You will need to learn the nuances of each of these, because at the end of the day, it is your brand and you have to know what’s happening.”

However, she adds, “That said, braving the unknown, being positive about the future and getting to see my passion to make a positive impact translate into real-life happy stories for healthy babies and a healthy future is beyond gratifying.” 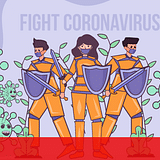 The week that was – the impact of coronavirus on startups across sectors in India, and more