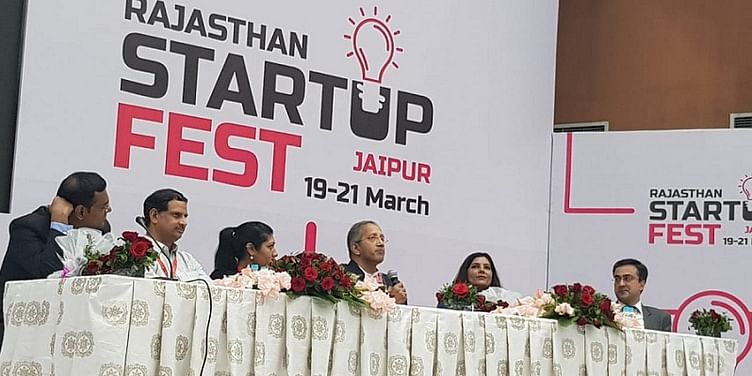 What do a bunch of seasoned entrepreneurs tell an audience comprising aspiring entrepreneurs? India is among the top five startup countries in the world, with around 72 percent entrepreneurs below the age of 30. But once you have an idea, how do you go forward?

At the Rajasthan IT Fest in Jaipur, a panel discussion by some prominent names in the startup world threw light on the travails of starting up, and how to make it all worth the effort. The panel was attended by Myntra CTO Jeyendran Venugopal, WiFi services platform Mojo Networks founder and CTO Praveen Bhagwat, Frontier Markets founder and CEO Ajaita Shah, Reliance Rajasthan CEO S Rajesh, and YourStory Founder and CEO Shradha Sharma, and moderated by KPMG Partner Mohit Bhasin (seen in the picture in the same order.)

Genesis of a startup

According to Pravin, if you believe you will make it happen, that is the genesis of a startup. “Then you need access to capital and market, and a team. You must be a great salesman to be able to execute these three – ability to articulate well enough to inspire them to believe in you – capital from investors, then good talent, and then customers. When I was starting up, everybody would give me advice; not money. After my 60th pitch, I got frustrated and told the VC that I would be out of there if he was not giving me money. He saw my passion and told me not to leave. It all starts with passion,” he said.

Pravin had another interesting anecdote for the audience. Part of the US team that first built WiFi in 1990s, Pravin moved back to India in 2002 as a professor at IIT Kanpur.

“I hired five of the best students in class to come work for my startup, deferring their PhD. Today, we are a global company which provides wifi to Reliance, Facebook, and many other large enterprises,” he recounted.

YourStory’s Shradha also recounted her initial days as an entrepreneur. “After studying in St Stephen’s college, Delhi, I worked with CNBC and Times of India and saved enough money to start up. Because taking money from family was not an option. You may also face such challenges,” she told the budding entrepreneurs.

“You need to decide this - am I the king and hero of my story or victim? There will be challenges from home, with money, speaking English, and general exposure. The question is, how will you come to say that I am the person who wrote my story? Nobody else will do it for you - not your parents, school, or government. You have to write your own story,” she said.

Evolution of an idea

Rome was not built in a day, and neither was any startup. Myntra CTO Jeyendran Venugopal said that lot of successful companies today went through several phases. Myntra itself was a personalised gifting company, before latching on to brands and becoming what is today - the largest fashion ecommerce company in the country.

“An entrepreneur conceives an idea from what they see in the market. Once you have the right business model, persevere and grow the vision,” he told the audience. He added that it is through constant innovation that Myntra was able to reach $1.2 billion GMV this year.

“Disrupting the market means give a new angle to things. Tech is driving innovation today,” he added.

Jeyendran had an interesting take on ‘Lean startups’. “It is significant to be able to fail fast; it is not about how well/fast your idea grows, but how fast you get up after falling down. Try out as many ideas as possible, make light weight prototypes, early studies of the market. Some entrepreneurs know that they can make it successful; some others have to give up on a line of thought and try out something else after a point. But for the latter, if they find out that there is no product market for it only after four or five years, quicker turn around will be hard,” he explained.

Rajesh of Reliance agreed with Pravin. “Startups need momentum, high energy, and clear cut measurables. But first get this - are you working towards and achieving a plan? If one business model does not work out, you have to figure out a Plan B. The entrepreneur should be clear about the idea, and how much he wants to scale, about how much time and resources they have, about the market they want to address,” he said. Rajesh elaborated on the significance of strong customer focus, proper pricing, differentiation against other similar players, and even cash burn.

“Yes, cash burn is a nightmare; but be realistic. Have a clear idea about how long you will experiment staying lean; you will need resilience (time and energy to re-cope). Don’t let ego rule you. As an entrepreneur you must be humble; listen to people,” he said.

Ajaita Shah, founder and CEO of Jaipur-based startup that provides solar energy to rural households, Frontier Markets, recollected her beginning as an entrepreneur. Hailing from a Rajasthani family and born and raised in the US, Ajaita came to India after her graduation. She wanted to pursue micro finance and joined a startup for five years - getting her hands dirty before starting up herself.

“I realised my passion was to help rural households access solar energy. I wanted to help farmers’ challenges. but how do I pitch and to who? What is my market? Why my product? I had learnt a lot about customers, product, and market, from working in a startup of my area of interest (micro finance). But most importantly, working closely with the founders gets you mentorship,” she said.

To understand the market, challenges and potential investors, Ajaita recommended students do internships. “With us, a year’s fellowship will help you learn about rural households. When I first harboured the idea to bring solar products to rural households, I went to my mentor who has a micro finance company in Karnataka, who let me pilot the idea in one of their branches. Just getting that opportunity to enter and getting exposed to huge. Otherwise, how do we know where and how to start? who to go to?” she reminisced. (Frontier Markets was launched in 2011 in Jaipur. It was the first energy access company to break even globally.)

A word to the government

According to Pravin, risk taking capacity is the highest after graduation. “As you grow older, you become more conservative,” he said. To grow entrepreneurship, he recommends that the government gives graduates a year’s salary to enable entrepreneurship. “Go try any wild idea you may have. If you don’t succeed too, that experience is valuable that anybody will be happy to hire you,” he said.

Shradha concluded with a request to the government. “If the government can build a strong mentor network, which will give free advice to young entrepreneurs – advising them on funding, hiring etc., that will be the ultimate boost.”