From a ‘bored’ youngster to an award-winning photojournalist, Ritesh Uttamchandani finds a purpose in making images 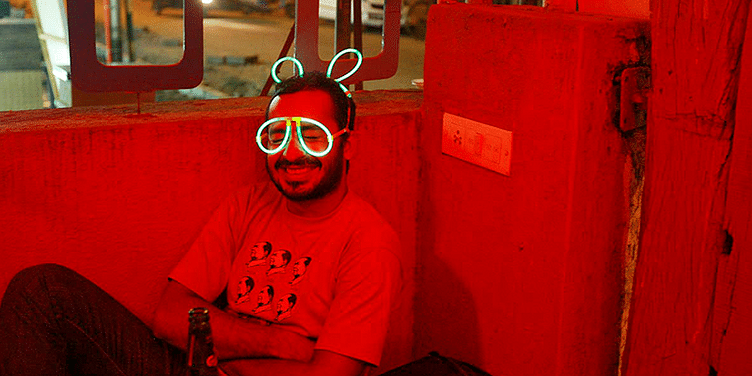 This photographer’s #PassiontoPaycheck journey will inspire you to find your purpose.

Ritesh Uttamchandani is the first to admit that he was not a model child. Growing up in Mumbai’s Mahim neighbourhood, the youngest of three children says he was ‘not doing much and was keeping weird company’. Like all good Indian parents, his decided to stage an intervention and packed him off to Dubai with his sisters, to work in an advertising agency after his Bachelor’s degree. “It was a family-run operation, and I was doing everything, from handling client meetings to outdoor marketing calls and making coffee for my bosses,” says this sociology graduate. Needless to say, he was bored.

The first order of business was throwing aside the guitar he had bought and getting a Ricoh SLR. “I think it was my sister who bought it for me because I kept insisting, but my family was worried that I may get lost again,” he reminisces. In 2001, he returned to Mumbai and joined the Xavier Institute of Communication, only to drop out before getting his postgraduate degree. All this time, he was taking ‘really terrible and stupid photos of my girlfriend, people sleeping, and flowers.’

“One day, I came across a man at Priyadarshini Park taking pictures with a huge telephoto lens. He introduced himself as A Srinievas, and said he was working with the Indian Express. When I told him what I wanted to do, he said, ‘You seem like an educated fellow. Don’t get into photojournalism, it’s a dog’s life. It’s a thankless profession, with minimal pay and miserable hours.’” Ritesh says that he didn’t realise then that he was being given the real deal, and was adamant that this was his calling. Srinievas relented and asked him to join him on his assignments.

“But he would do weird things. He would call me at 7 am and turn up at 1pm. I would be summoned to bizarre locations in the city. He was gauging if I had patience and curiosity. He made me learn by watching him and others,” says Ritesh.

From career to calling

In 2004, Ritesh joined the Indian Express in Mumbai. From there, he moved to The Hindustan Times in 2005, and contributed many memorable images to the inaugural Mumbai edition and subsequent editions. He moved to Open Magazine in 2008 and it would be seven years before he decided to give up his job and ‘do something bigger.’

“I have a definite way of seeing things which has been cultivated over the years. Mainstream media is like Bollywood -- too many mouths to feed, and too much at stake. One day, hopefully soon, all hell will break lose. Photography is really important, yet, photographers and photos get treated as second-class citizens Almost everything we do, every event in history, is associated with an image. Editors know that, everyone knows that, but mainstream media outlets are slaves to marketing teams, and their pages look like webpages, which is not good for visuals.”

Ritesh says that he himself has been part of some powerful projects. “I had to photograph HIV positive orphans and children in Sangli, whose parents had passed away or were dying, and the grandparents were being forced to go back to work to take care of the little ones. It was an emotionally draining assignment, but two things happened. The Hindustan Times decided to convert the author’s text into statistics and gave me a Sunday spread. All photos and numbers were aimed at raising awareness and funds, and asking the government to look into this problem that could amplify in the future. The paper raised a lot of funds for the cause, and I think no award can come close to the feeling that my work has brought about some positive change in a person’s life.”

Ritesh is currently working on a book of his photography called The Red Cat and Other Stories. “The Red Cat is a Sindhi fable my mother told me as a kid. It was one of my favourites and I thought it worked very well with my book. I am tired of seeing nostalgic representations of Bombay as a city of dreams and the geographical spread of most books on Bombay stay limited to South Bombay. To use a local word, it’s a huge amount of bhunkuss. I want people to get close to the feeling of what it is like being here. Doing yet another clichéd coffee table book is not on my list. The cat story works on a metaphorical level and I urge viewers to make the connections instead of looking for an actual Red Cat in the book. Read the photos, like you would read text. Don’t just look at them,” he says.

Ritesh says that India is still not at a stage where photography is considered art. He recalls gallery hopping in Mumbai two years ago, with his prints. “One gallerist’s assistant was kind enough to not even lift the butter paper off my prints. The rejection was good. It made me realise that maybe my work is not suited for a sterile white wall. At Fotofestival Scheidam in Holland last year, the curator was open to having my brothel ceiling series installed on the ceiling of a warehouse and people had to lie down to experience the images. That made me very happy. Also, to appreciate art, the stomach has to be full. We are a country of many people living in tiny homes built with home loans. Many consider photos to be inferior to a painting because, ‘button hi dabaya na’. But, every now and then, someone comes along wanting to buy one of my tangential photos and that is encouraging,” he says.

In the past year, he has shot fashion catalogues, worked for the UN, the Ministry of Defence, and international papers and magazines. “I have also shot weddings, baby birthdays etc. I don’t limit myself to a genre or a style,” he says.

His advice to those looking to follow their passion is “Go for it, we have one life. Keep some money aside and always have a financial cushion. And don’t be ashamed of failure. Failure is good, use it as fuel. Never be afraid to ask a question. Also, never send work-related messages on social media. Work hard, find that person’s email address and draft a proper email,” he says.

For his own future, he says, “I want to make books, see more countries, get more assignments, hang with people, tell more stories and basically try being a good person. My family wants me to get married, and have babies. I am going to have to look into that aspect soon!”

And what does he do in his spare time? “I make photographs,” he says.