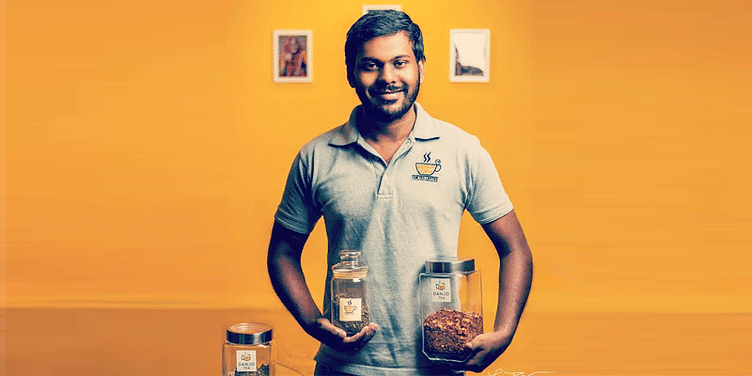 Funded by one of its customers, Buddies Cafe is a tea room that is planning to launch its own in-house brand Danjo Teas

Where it is based: Coimbatore

Twenty-eight-year-old Nirmal Raj's love affair with tea started as a child when he would sneak into the tea factory his mother worked at, and rest on warm gunny bags filled with tea leaves. He dreamt of a career in the tea industry, but those were the dreams of a six-year-old enveloped in the aroma of tea.

Life, though, had other plans for Nirmal. Having lost his father when he was very young, his mother Arockia Jothi had to shoulder the family's responsibility on her salary as a clerk in INDCO 6 in Ooty, the same factory where his father worked as a tea maker.

Following his graduation, Nirmal entered the corporate sector as a business development executive but stuck true to his passion in his free time, supplying tea dust to local shops in Coimbatore. Here, his biggest challenge was to find the best quality tea for his customers at the lowest possible rate.

Consulting with some dealers, much to his surprise, he saw that tea leaves that could be procured at Rs 40 to Rs 60 per kg, were being sold at Rs 150 to Rs 220 per kg, and several samples were treated with chemicals. This is when Nirmal decided to change things, and set up his own tea room.

Set up in 2012, Buddies Cafe in Coimbatore serves over 70 varieties of tea. Nirmal says, “We serve white, green, Oolong, black, iced teas, fruit-based and herbal infusion teas, as also some snacks.” At present, he has one Buddies Café outlet, three Buddies Tea Point, which are express delivery outlets, and a high-end Buddies Cafe Lounge.

The shift from coffee to tea

Talking about the challenges of setting up and scaling the business, Nirmal says, “We started Buddies Cafe with a lot of hope. But nothing went as per our initial plan. Being first generation entrepreneurs, we made a lot of mistakes - our calculations did not reflect in our revenues, and it took many years for us to be profitable.”

“Our cafe was built in just 100 sq ft area and we wanted to serve the best tea in a great ambience. In 2012, tea was being sold at road-side stalls for Rs 7, and in our café, freshly-brewed teas were sold for Rs 10. So, after running our business from a high-rented space for few months, we were forced to shift to a new location,” he adds.

“Three days after we opened the new cafe, we made our first profit.” He continues, “When customers walked in, they were surprised to see our menu. In the beginning, we sold more coffees than teas. Although many of our customers and friends asked us to change to a coffee shop, we had great faith in our product. Though we had very few customers, their support and trust in our product made us move forward.”

The company, with initial sales of around Rs 300 per day, now claims to make over Rs 12,000 per day. It currently has a team of over 10 people, which includes cafe-in-charge, tea brewers and house-keepers.

Initially bootstrapped, the company recently raised an undisclosed amount from one its customers.

India is the world’s second-largest producer of tea, with production of more than 966 million kg, and a turnover of $1.9 billion. Capitalising on the huge growth-oriented tea market in India are a handful of startups with a clear focus on tea. These include ChaiPoint, Chaayos, Chaipatty Teafe, Teabox, The Kettlery among many others. From startups to even road-side tea stalls, all of them are competitors t0 Buddies Cafe.

Nirmal says, “Our strength is tea and we serve only freshly-brewed teas. Added to this, we offer a great place to relax and enjoy the favourite cuppa, with some soothing music and books. The motto of our cafe is to make sure you feel at home.”

Since inception, Buddies Cafe has gathered a lot of attention within India and also has global customers. It has also received franchise inquiries from overseas.

The company is on its way to launch the second Buddies Cafe Lounge at the Coimbatore International Airport. “We have franchise inquiries from Bengaluru, Hyderabad, Pune and Chennai. We will be opening eight new outlets by this year-end,” says Nirmal.

Nirmal will soon also launch the Danjo Teas brand through a supply chain and e-platform. “Now, our buddies can order the finest tea online and can brew at home like connoisseurs. Subscription and individual packs can be purchased through the ecommerce platform,” he says.