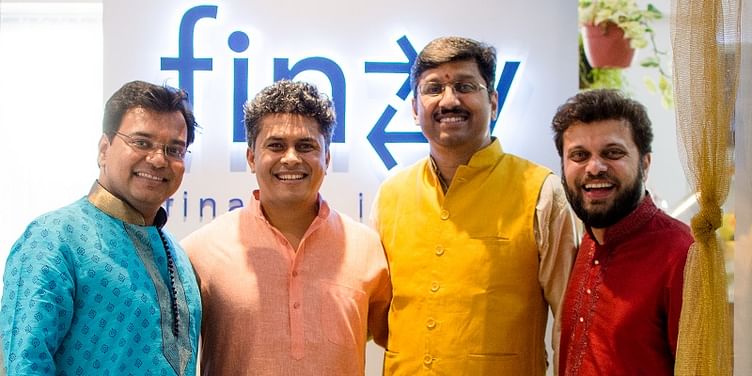 The rules of investment have changed over the years. First it was traditional methods like saving with fixed deposits, and then came insurance and stock markets.

However, the rules have changed yet again, and peer-to-peer lending is being viewed as an investment avenue that is expected to give returns to the tune of 18-22 percent, according to industry estimates.

Bengaluru-based Finzy is trying to tap on to just that.

Amit More’s background in finance had him excited about the credit opportunity in India. In his previous role with Edelweiss Capital, he was responsible for large ticket structured credit but the desire to start up was strong.

Teaming up with Abhinanadan Sangam, who Amit has known since 2006, the duo chose to set shop in the ripe Indian digital lending market. The duo took a shot at the P2P lending opportunity in May 2016, the same month when the Reserve Bank of India (RBI) and Securities and Exchange Board of India (Sebi) address this industry in a discussion paper.

“P2P companies had a lot of potential and we felt it was a true alternative for a new asset class,” recalls Abhinandan.

As the two interacted with more investors, they realised that working in the space was strongly about sales, marketing, and acquisition of new customers, as well as actively distributing products.

They roped in Vishwas Dixit, who headed Toyota’s sales operations for the South Region, to market the platform. The other addition to the founding team was Apoorv Gawde, who was responsible for the company’s strategy.

Finzy was incorporated in October 2016 with Bridge FinTech Solutions Pvt Ltd as the parent company.

Co-founder and CMO Vishwas explains that just like other players in the space, the company wanted to cater to the credit needs of individuals that banks did not consider. He adds,

“People working at different companies like startups or even freelancing might also be worthy of getting loans. Further, multiple documentation is a huge friction for customers applying for a loan with a bank. So, the old way of doing business should be disrupted, and even the investors need to have a new lucrative asset class.”

Finzy is a digital lending platform that connects qualified borrowers with investors looking to invest in a new asset class that provides monthly returns.

According to the company, the rate of return for investing in Finzy is 15.5 percent for investors.

The average borrower on the Finzy platform is a salaried individual, who earns Rs 25,000 to Rs 30,000 per month. This individual is definitely not in the underserved category, but yet, does not find preference with banks when it comes to lending.

Lenders on the platform have exposure to other asset classes and risks, and typically earning more than Rs 20 lakhs per annum. The platform also has some high net worth individuals as investors.

Based on the details, Finzy’s credit algorithm rates borrowers in three categories, A (A1-A6), B (B1-B6) and C (C1-C6) based on over 130 parameters. The level of risk increases from A to C. This classification also leads to varying interest rates starting from 10.99 percent for an A1 rated borrower, to 27.99 percent for a C6 rated borrower.

The loan rejection rate on the platform, not surprisingly, is 80 percent, which is better than the industry average. The platform gets loan request starting from Rs 50,000 to Rs 5 lakh, with the tenure reaching up to 36 months. The founders, however, state that smaller ticket size loans get catered to quickly. Loans ranging on the higher ticket size of Rs 3 lakh take a little more than three days to serve.

Apart from investing manually, investors or lenders have the option to also invest automatically through ‘Finzy Pro’. Based on algorithms, Finzy Pro chooses loans for the lender and invests in them. The founders also plan to introduce a ‘goal-oriented’ feature to this offering.

One of the key concepts which differentiates the platform is the risk diversification.

With a ’20-20’ rule engine, the platform ensures that not more than 20 percent of a lender’s investment portfolio, or 20 percent of the required loan needed, is catered to by a single lender. This way, a lender’s investment portfolio is diversified across A1 borrowers with less risk and even C6 borrowers, which yield to higher returns. This is applicable for both automatic and manual investments.

“So, what happens when an investor comes to the platform and does not find a loan? To solve this issue, we introduced Finzy Queue, which allocates the money from an investor’s portfolio to fill the loan. However, the investment is made by the platform only once the investor approves.”

Further, Finzy charges only one percent commission when the investor receives the EMI after completion of the entire transaction. The platform claims to have no EMI defaults in the last 10 months of operations.

At present, Finzy is active in eight cities in India. However, almost 95 percent of its traffic and requests are from Bengaluru.

The platform has disbursed close to Rs 6 crore in loans over the past 10 months. The founders claim they receive loan requests worth Rs 35 lakh every day. In March, the company got close to 200 loan requests, which grew to more than 260 requests in April.

The company plans to expand geographically. In future, it is also planning to expand its network of channel distributors and is piloting with vehicle dealers to provide credit for vehicle buyers. Last month, Finzy raised $1.3 million as part of its first round of pre-Series A. The company is expected to raise the second and final tranche of the round this month.

The company plans to introduce more institutional lenders to the platform in the coming year.

This year, India’s peer-to peer lending companies came together to form the Association of P2P Lending Platforms. Being a representative of the P2P lending industry, the association is expected to work in conjunction with the government and regulatory authorities on matters of compliance.

According to industry estimates, the P2P lending market in India is expected to grow in to a $5 billion industry by 2023. Further, the space continues to have players including Faircent, LendBox, i2iFunding and i-lend.in among others.