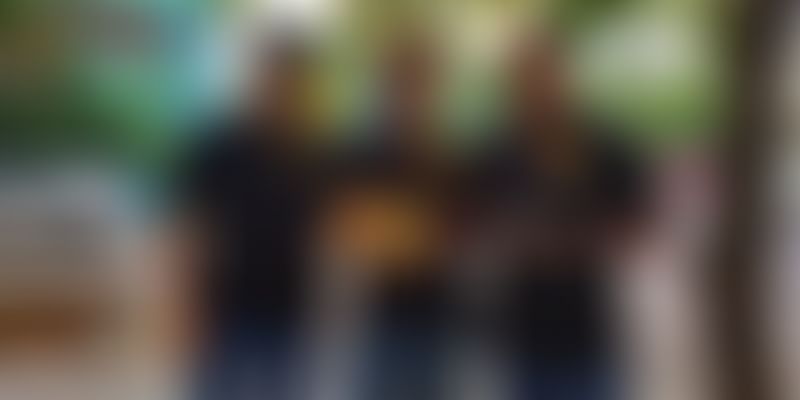 Religion is estimated to be a $40 billion business and it has used all distribution channels to reach the faithful. Now, VR Devotee is bringing VR into the mix.

What they solve: Compress and bring religious rituals, live from places of worship, for people to experience on a VR platform.

When you wake up in the morning, how many of you get up on the right (literally) side of the bed and look at a photo of your favourite deity to bless you?

That probably makes many of us. Then there are those who plan to make a pilgrimage but cannot because of various reasons. It may be because your wife is pregnant, your husband is looking for a job or your parents are really old.

Bengaluru-based startup Kalpnik tells you not to despair by bringing all your favourite Gods to your living room by capturing live pujas and blessings on a virtual reality platform called VR Devotee.

What’s interesting is that it has close to 150 temples signed up on the platform and have already raised $500,000 from angel investors.

With over 1.27 lakh downloads, it is well on its way to raising Series-A funding.

This startup is the brainchild of experience. All three founders, Apul Nahata, John Kuruvilla and Ashwani Garg have 80 years of combined work experience. Apul and John were once entrepreneurs. John was part of Air Deccan, was in several advertising companies and also the Oberoi. Apul built a startup in the telecom space with 17 million subscribers before moving to Reliance Industries. It was there he met John. Ashwani was John’s neighbour and headed Intel for over a decade.

“The interesting thing is that we had all quit and we did not even know it. Apul told me on a plane that he had quit. I met Ashwani the next day and he said he had quit. I had put in my papers too. That’s when we all sat together and began to figure out what next,” says John, Co-founder of Bengaluru-based startup Kalpnik.

The beginning of VR Devotee

Subsequently, the trio began to meet and discuss starting up their own venture. Every idea they thought of was a “me too” idea and there were a dime a dozen ecommerce companies.

That’s when experience and observation came into play. They were having dinner with Apul’s families in Mumbai, when suddenly Apul’s parents spoke about a big ritual at a temple, which they could not go to because of their age.

That’s when John, Apul, and Ashwani figured what if they could bring live religious prayers to devotees, not through television, but through the use of virtual reality technology.

They invested Rs 55 lakh, registered the company and began to work on the idea. First, they needed to get a buy in from a religious centre. The three of them went to Lepakshi, in Andhra Pradesh, where John would frequent an ancient temple. They told the priest about the idea and he was excited because this meant that the temple would get many more people watching prayers.

“Interestingly, the priest took to the idea faster than some of the investors we spoke with,” says Ashwani. That’s when the brand VR Devotee was born.

Now, with a temple in place, the trio set up high-end cameras, at the place of worship, and began to record the prayers and the rituals. “The first two temples that we covered had glitches. But, in the early days it is all about learning and pivoting the business model,” says John.

The trio realised that this model would never scale. It was in the summer of 2017 that they decided to move to a model where consumers would be charged money while the temples would not be charged. Now, this is where the product scaled. The temples began to market the app and then people began to use the service.

“We had kept it free till last year. The yearly subscription service went live and there are customers willing to pay more than what we have priced it at,” says Ashwani.

The team charges Rs 99 per month to access all the prayers. The company has gone commercial since January 2017.

“The business of spirituality and religion is big. People have taken to TVs, but TV spirituality does not give access to deities upfront. The virtual experience allows a person to make offerings of virtual flowers, fire, incense and water through the VR Headset and toggle,” says Bobby Reddy, angel investor and HNI.

You can discover 150 temples on the app. “The depth of the frames, the immersive experience, transferring those frames over a network without creating any latency was what his team worked on,” says John.

The revenues for VR Devotee will kick in only next year.

The company competes with many online astrology and religious services companies. They compete with the TV channels that offer religion as a service on cable TV.

The media in India says religion is a $40 billion dollar business and there are no official reports about its size. However everyone in the world knows that India is a land of faith and religion is as important a person as their salary.

But, there is no escaping the fact that in the modern age, Gods have to use the cloud to distribute their message. It was books, radio, cinema, TV and websites that religion used in the past to find the faithful.

There is no escaping virtual reality (VR) as a distribution channel in the future. This trio has certainly caught onto God’s next best move.