With a focus on molecular diagnostics, this healthcare startup aims to disrupt the sector 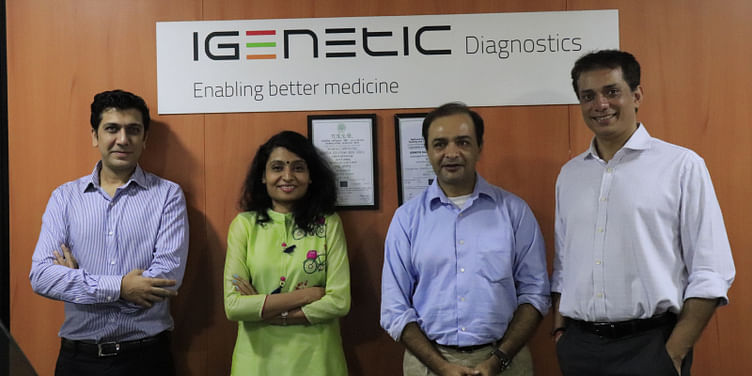 The problem it solves: Diagnostics

Working for PE firm Actis, Arunima Patel was intrigued by the healthcare industry. With significant exposure to the healthcare and diagnostics industry, she realised that while the sector was growing, advanced diagnostics and molecular genetics was in its nascent stage.

Realising that the challenge in the sector was lack of organisation, Arunima resigned from Actis and started iGenetic. The startup specialises in molecular diagnostics, which applies molecular biology to medical testing to provide quicker and more accurate results.

“iGenetic has the capability to develop many in-house tests and products that are not available in the market today with several ‘first-in-the-market’ tests already commercialised,” she says.

Arunima adds that the vision is to create a leading organised pathology company solving unique problems, especially in areas such as infection, oncology, and infertility, which are becoming a huge issue for the country.

Once Arunima had the idea, two of her colleagues from Actis, Siddharth Patodia and Homer Paneri, decided to co-invest and build iGenetic along with her. Recently, Dr (Capt) Sandeep Sharma also agreed to join as a board advisor. Through LinkedIn, Arunima roped in Dr Archana Krishnan and Dr Sanjay Sonar, who were doing path-breaking work in the molecular diagnostics domain, and had even developed some niche tests in this space.

“They agreed to partner with me and bring these tests to commercialisation. Thus, iGenetic was born in December 2013 with a vision to be one of the most comprehensive pathology providers with unique offerings using advanced technologies,” Arunima says.

The company was commercially launched in 2015, and the team says it has created several differentiated offerings in the critical care infection space.

Why change the current method?

Traditional microbiology methods of diagnosing infections and antibiotic resistance patterns can take 48 hours or beyond. Even after a long wait, in a majority of the cases, microbiology methods cannot provide a diagnosis if the person is already on an antibiotic treatment. iGenetic tests solve this problem, and provide results using molecular techniques with a 24-hour turnaround time.

“Even if the patient is on antibiotic treatment, using advanced methods we can provide a diagnosis. Currently, we are providing infection detection for multiple conditions such as septicemia, meningitis, infection in the central nervous system, transplant cases, cancer patients, orthopaedic cases, heart conditions, and others,” Arunima says.

She says that the current practice by many players is to use microbiology techniques, which is time-consuming. It requires two to three days to grow bacteria cultures.

“They take much longer to grow cultures of bacteria, fungi, and some of the other pathogens. If the patient has started taking antibiotics, it may not be possible to grow cultures. What we are using is molecular techniques. These are much faster and results can be derived within 24 hours. The results can be obtained even if the patient has initiated antibiotic treatment,” Arunima says.

She says quick and precise diagnosis can go a long way in saving patients' lives. It can also reduce hospital stay, which means cost saving for the patients.

“For some critical tests, we provide a report within eight hours. We offer a range of tests in areas of infections, critical care, gynaecology, infertility, and cancer diagnostics. We have brought down detection time for high-end diagnostics from three days to one day or less,” Arunima says.

iGenetic has a team of 200 people, 20 collection centres, and two processing labs across Mumbai, Hyderabad, Delhi, Nagpur, Ahmedabad, and Bengaluru. The team claims to have signed over 100 Memoranda of Understanding (MoU) with leading hospital chains in the country, including Apollo, Rainbow, KIMS, Jupiter, and SL Raheja, and over the next three years expects the share of its revenues from specialised services to increase to 40 percent.

Eye on the future

iGenetic has raised $20 million in funding from Manipal Education and Medical Groups (MEMG) and UK-based development financial institution CDC Group Plc. The team says that so far, Rs 30 crore of its Rs 130 crore funding has been deployed.

Biotechnology and genetics are not areas that one hears about a lot in the startup, or even the corporate space. Be it Kiran Mazumdar Shaw's work or a one-off biotech company getting funded, news is few and far between. The market includes Sequoia-funded MedGenome and Hyderabad-based MapMyGenome.

Genetic testing is fast growing, not only in the global market, but also in India. Of these, the newborn and prenatal genetic testing market is believed to touch a CAGR of 31.91 percent by 2020. Some of the companies that are into genetic testing include US-based 23andMe, Igenomix (which also has a subsidiary in India), and Positive Bioscience among others.

In the near future, iGenetic plans to establish a larger presence in other cities, including Chennai and Kolkata and some cities in Kerala, Chhattisgarh, and Maharashtra. “We also want to expand to Sri Lanka, Middle East, and other neighboring countries very soon,” Arunima says.