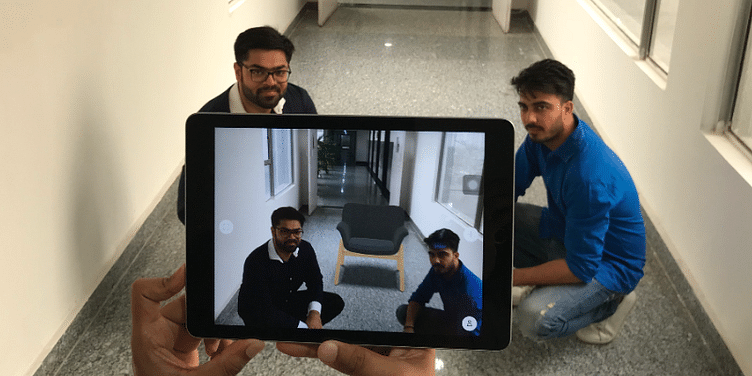 Adloid uses AR, ML and AI to create a superior buying experience for people. Its clients include fashion and beauty brands, furniture retailers, carmakers, and more.

Adloid was born in the corridors of IIT Delhi, when Kanav Singla was in his final year of civil engineering. Kanav, who hailed from an entrepreneurial background, knew that he was not cut out for the 9-to-5 corporate routine.

High on entrepreneurial energy, he wanted to create a 'global tech company out of India'. “There are so many things I can do on my own, and so much disruption technology can bring about,” he told himself, while his batch mates lined up for campus placements.

Kanav skipped the placement process, but IIT-D exposed him to several business leaders, including the CEOs of leading ecommerce companies. Conversations with them had him realise that despite the growth in Indian ecommerce, most companies failed to offer a superior retail experience to customers. Much of it was because they lacked in advanced technology.

“It was a 10-year-old problem and all industries assumed that there was no solution. But, I knew it could be solved with augmented reality (AR). Back then, AR and machine learning (ML) were just concepts in research journals. I wanted to take them out of the books, and make real products.”

At one of the industry conventions, Kanav met his future collaborator Mohit Malik. Mohit had had a stint with Accenture and was “about to take up a job” at Microsoft when the two met. Both had a shared vision on AR. They pooled in some funds from family, friends, and their own savings, and launched Adloid in 2016.

The product and use cases

Adloid helps these enterprises ‘augment’ retail trials and catalogues for their customers, thus offering a much richer and close-to-life shopping experience. The smart AR technology is custom-fitted for each client, and can be accessed through smartphones, tablets or the mobile web.

For instance, a furniture retailer or a car dealer can use Adloid to create live product demos for its shoppers. Or an online fashion or beauty brand could use Adloid to help the customer try on a shirt or a lipstick as if it was an in-store, in-person trial.

“AR technology has existed for seven years at least. But, it was not smart enough. So, we spent a lot of time building our own technology that ensured our cameras are smart and light years ahead of others. They can understand and interpret surroundings in a way humans do.”

It is these smart AR-led cameras that eliminate the need for big virtual showrooms or huge TV screens installed at brick-and-mortar outlets. A car dealer can augment a product trial for the customer with a few taps on the iPad. He can show all variants and components of a car without having to stock everything.

“He doesn’t even need the space to set up a showroom. His infrastructure cost is zero. That is the disruptive power of AR, it will eventually eliminate the need for car dealerships,” says Kanav.

For a real estate developer, it is all the more beneficial. AR can help him do away with the need to build sample flats for potential buyers. Kanav explains,

“The entire real estate offering, and all stakeholders from the architect and the interior designer to the end consumer, can be augmented even before a flat is built. It not only improves customers’ decision-making process but also helps them choose the right product more often.”

Clients and reception so far

Kanav says Adloid has helped increase the “customer satisfaction quotient” for its clients significantly. Product returns have come down by 80 percent, he claims. For brands, the cost of customer acquisition and retention has also come down.

Adloid’s clients include leading furniture-makers like IKEA and Pepperfry. Potential clients in fashion and beauty are Myntra, Amazon, Flipkart, Nykaa, Lakme, and so on. It has also roped in a leading automobile manufacturer. By Adloid's own admission, “the auto industry is our biggest win”.

“Auto dealers had been trying 360-degree videos and other things to improve the car-buying experience, but nothing works as well as AR. The visual impact of the AR product is massive.”

On being asked about Adloid's revenues so far, Kanav refused to divulge numbers.

Adloid had been bootstrapping until December last year, when it raised funds from angel investors Bikky Khosla (CEO of TradeIndia), Ajay Gupta (who’s a part of the India Angel Network) and a few others.

In January 2018, Adloid won ‘The Ten Minute Million’ competition organised by the Entrepreneurship Cell of IIT Bombay. It included ten-minute pitches from startups to a panel of ten investors. The winner went on to pocket Rs 16 lakh from the investors in exchange for a 4 percent equity in their venture.

Kanav says the potential of AR is enormous. It is a $4 billion industry in India, and sectors like automotive, healthcare and ecommerce can be transformed by the technology. Can the government ‘augment’ its growth?

“Yes, but indirectly,” says Kanav. “We’ll benefit from the 5G rollout. So, the faster it happens, the better for us. AR adoption will go up.”