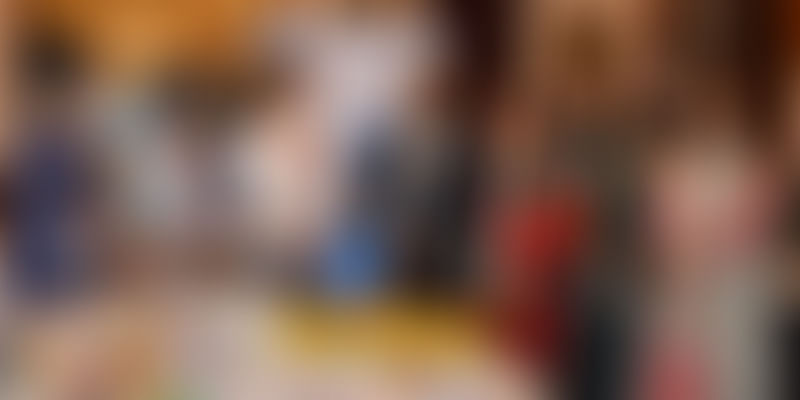 Walmart is one of the world’s largest companies for a reason. Its unique pricing mechanism and supply chain machinery is unparalleled.

The company’s India story is a decade old, and it has largely remained a cash-and-carry centre with more than 21 large stores. Sources say that it has invested more than Rs 2,000 crore in the business so far. But, Walmart does not share any numbers.

Recently, the global arm recently acquired Flipkart - India’s ecommerce giant for $16 billion. The company will, however, keep the ecommerce entity and its cash and carry business separate.

Walmart India’s Managing Director, Kris Iyer spoke with YourStory on why the Indian consumption story is strong, and is unique every 100 km.

He also gives an insight into the working of the small store, regional brands, and how they are going digital.

YourStory: Why is the India story unique?

Kris Iyer: When compared with China, the consumption story in India is unique. As I see it, in India, the growth story is less about exports and more about domestic consumption, which is on the rise. The consumer behaviour is very different across markets, so understanding and serving them is a great opportunity. One of the key factors changing consumption is the increase in per capita income; the overall growth for the last ten years has been good. India should grow at eight-nine percent to ensure gainful employment.

Going forward, the younger population relying on credit is going to be a key driver for growth. Smartphones have democratised consumption because information is available to the consumer, which makes them more informed while retailers have upped their game to keep up with changing demands.

In India, consumption patterns change every 100 kilometres. In retail, we can standardise a few things, but we need to serve the local market. There are some commonalities, but it’s important to understand the differences as well. For example, rice consumed in coastal Andhra would be different from what is consumed in Aurangabad.

YS: Walmart is focused on small towns, is there any reason for that?

KI: We are doubling our stores to over 40, from the current 21. Yes, Tier-II and Tier-III towns are great for business because rentals are low. More importantly, our business model is such that we need four acres of land to construct a box and build a 60,000 square feet store and parking space for more than 125 cars. This kind of space is only available in smaller towns. That said, let me not take anything away from the small town customer, who is highly aspirational, and does not lag behind those in large cities like Bengaluru or Mumbai.

Per capita income is rising in these towns, and general demand is picking up. Modern trade is growing at over 20 percent in these stores, and don’t forget your traditional trade, that is growing at 10 percent. There is an increase of supply in India and demand is rising steadily in smaller towns.

YS: You champion the smaller store in India. What have you learnt from serving them?

KI: Walmart brings several synergies to the small store. One of the fundamental advantages we bring to small shops is to have all products under one roof. They don’t have to source from 10 different vendors. It saves them time, which they can use to spend with their consumers. Our mission is to make them prosperous.

We work with assortment, planograms, inventory management, and also help them digitise to serve their customers. We have the B2B ecommerce model in place for these stores. A member can place an order through the website, which is then delivered. However, in a majority of cases, the small store owner visits us and buys his assortment. That’s the behaviour I notice these days even with the smaller store. Mom-and-pop stores throw in different data sets; by geography and buying habits. The Walmart story is about being closer to the customer, in India we serve mom-and-pop stores. That does not mean we don’t understand the end customer of the small stores. It is interesting what we learn every day.

Let me give you an example of how Indians consume. I recently visited Rajahmundry, a coastal town in Andhra Pradesh, I was walking around the store where I discovered that in the south, people like 75 ml coffee cups when compared to some of my stores in the north where they like 150 ml cups. Our store managers would tell us that the smaller shops wanted these kind of products and not the ones we thought would work. Data plays a vital role in the Indian market. We do crunch a lot of data, but the journey in India has just begun. I won’t claim to have done big things with data yet. We are in the process of digitising the whole small store-connect.

YS: Do you see the emergence of local brands?

KI: Regional brands play a major role in India’s consumption story. We have a couple of in-house brands too. We work with SME brands (hundreds of them) and national brands. Some of these regional brands will go national as we speak. Going global (for these small brands) depends on how well they can manage the supply chain and how they can handle that scale. We help them with our global sourcing team from Bengaluru to go international.

YS: What work have you done with startups in India?

KI: We have startups working with us to digitise our business in India. I cannot name them. We have not started any accelerator because of our brand equity, but startups have reached out to us directly. We have to stay close to the younger generation because they have ideas that can cut down on the time taken to serve customers. The reverse mentoring concept is important.

YS: What are some concepts that you have learnt from startups?

KI: I believe in “fail fast, fail cheap”. We have much to learn from startups and I have implemented a form of open working culture in my office. For example, startups work in pods and open spaces. I am bringing that collaborative culture to our office. I mentor people directly. We are building a fulfillment centre in Mumbai and the person in charge of the project directly reports to me in order to take decisions without any layers. I think it is critical to work like a startup. It is very important that leaders take sponsorship of ideas for faster decision-making.

YS: Is Walmart focused on building an ecosystem of women entrepreneurs?

KI: Walmart strongly believes that women empowerment is critical. Gender equality is a social issue. We have women in factories, farms and retail programmes and our aim is to increase the number of women working in Walmart India. We launched the women’s entrepreneurship development programme in 2016. We have 32 women who are part of this global concept and implemented through WeConnect International and Think Through Consulting. They were trained for nine months on how to scale up businesses and also the soft skills needed to build a business. We have worked with 93 women-owned businesses so far. Eleven of them have been integrated in to our business and these women supply home and grocery products.

YS: Is India’s brand story going to explode and why?

KI: Yes, I see hundreds of local brands emerging. The energy and creativity of the startup world is wonderful. It will take a minimum of ten years to really go national. Honestly, I think I cannot advise startups because I am learning from them. But these small startups should be bold enough to approach large companies and tell them how innovative they are. I am a CEO who is completely accessible. There are people out there that want to support startups and you should not give up on your ideas. Today's brands are digital first and that's because the customers are expecting them to be so. Digital is imperative because of its ability to take a brand to speed in their go-to market strategy.