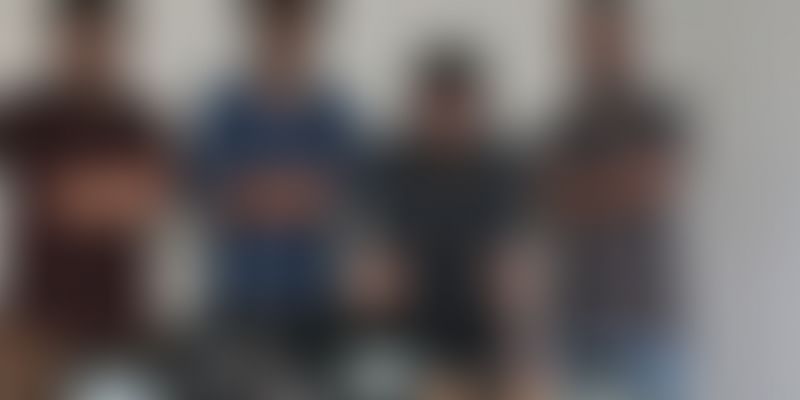 Four-year-old Tesseract, which taps AR-VR tech for headsets, smart glasses, and cameras for enterprises, is now going after the consumer market.

Marvel fans will remember the Tesseract, a crystalline, cube-shaped vessel that housed one of the six Infinity Stones that possess unlimited energy. Kshitij Marwah, 30, may not be an Avenger, but he has a Tesseract of his own, a product company that’s tapping the unlimited potential of mixed reality.

Kshitij, who studied at IIT-Delhi (Computer Science) and Harvard-MIT Health, Science and Technology, Boston, US, returned to India for an experiment of sorts - Tesseract, his product startup that has, in the last four years, invested a lot of time on R&D. The company, which was launched in February, offers AR headsets and VR cameras. It also provides a platform for developers to build apps and content for their headgear.

And Kshitij isn’t worried. “This is a long-term game,” he quips. The company has filed five patents so far for:

What sets Tesseract apart is the fact that it is the only deep tech company manufacturing its hardware in India.

However, it’s important to remember that there is a fundamental difference between AR and VR. VR is immersive and takes you to an entirely new place – away from your current world - when the headgear is on. AR, on the other hand, gives you experiences – in many cases without headgear – that allow you to experience the current world by adding something new to it.

Kshitij, who has been ploughing back everything into research, speaks about his – and Tesseract’s journey.

“We started in 2015. I had just moved back to India and was still leading the MIT Media Lab India Initiative, which led me to meet extremely talented individuals who combined cutting-edge technology with local culture, art, and design to create innovative products like flexible displays, smart pillows with Zardosi threads, smart shoes for the blind, and much more,” Kshitij recalls.

He adds that the talent led him to wonder if he could create a cutting-edge product company out of India - that was the beginning of Tesseract.

The challenges they faced were making things work in limited finances, the lack of talent in the VR industry, and the fact that India was slow when it came to VR. However, the potential was huge and they bet on it.

The aim was to build a camera that could take photos and create walkthroughs in 360/3D/VR, giving viewers an immersive experience of a house, street, hotel, restaurant, or locality. This product, which was launched in end 2016, generated Rs 50 lakh in revenues.

Ironing out the kinks

However, the success didn’t come without challenges. The team realised that the four-camera setup was causing parallax errors as the cameras were spaced apart. They tried multiple software solutions but couldn’t fix it. On the hardware side, they found calibrating four different cameras challenging.

They tried three cameras, then two, but both attempts failed. After in-depth research, they found that the one-camera design worked best when rotated on a particular axis. The next challenge was figuring out the most suitable battery configuration. After a month of testing different batteries and charging circuits, they were able to crack it. The product, priced at $2,500 (Rs 3 lakh), was to be sold only to enterprises in the field of real-estate, travel, hospitality and logistics. The idea was to help these enterprises map out their properties in VR and 3D, and deliver an immersive experience to customers.

The previous method of doing this was manual, laborious, and time-consuming. Tesseract’s goal was to bring down the time from 15 days to 15 minutes.

“At that time we didn't know even if such a product could be made and out of India. We travelled extensively to find highly talented people who are passionate about creating hardware products,” Kshitij says.

They found manufacturers in the bylanes of Dharavi, the streets of Andheri and Bengaluru, and the dusty roads of Gurgaon. These were Tier II-III suppliers, who became equally passionate about building this product with Tesseract.

Six months of hard work later, they launched Methane and sold it to companies like Common Floor, Housing, MakeMyTrip, Delhivery, Solund Hose (major real estate company in Denmark), TisTus (Brazil), LucasFox (Spain), and many others around the world.

The success validated their thought that Tesseract could not only make a cutting-edge product out of India, but could also sell it globally.

After a year, the company began investing in headgear that looked more like it could be donned by storm-troopers from Star Wars. The Holoboard, which costs Rs 10,000, is an AR headset that works with a smartphone and democratises AR.

Tesseract wants to democratise mixed reality, especially after they validated the enterprise product. “We believe mixed reality is the next wave of our technology revolution, bringing out new ways to experience content, communicate with your loved ones, and connect with your colleagues,” Kshitij says.

They have launched two products for this. The first is Holoboard, a “markerless” augmented reality headset that works with any smartphone. The Holoboard allows a cross-platform and multi-user experience via the smartphone and the headset. This allows anyone, especially enterprises, to experience and deploy mixed reality. The company also provides, in modules, spatial tracking software optimised for the smartphone.

The company has also created the Quark MR Camera, an add-on that attaches to your smartphone to capture mixed reality experiences. This lets the user capture, edit, and share MR experiences over existing platforms or over the Holoboard - completing the loop from MR capture to viewing.

This video shows how their 360 VR Camera works.

“We are a deep-tech and product company. Like any such company, we have spent almost three years developing our IP, refining our product line, innovating, and finally making products/solutions that can put India at the forefront of this technological revolution,” Kshitij says.

The company believes that creating smart glasses like Google, and Vuzix (2D smart glass) or holographic headsets like Microsoft, MetaVision, and DAQRI was a big opportunity because these devices cost more than $2,000 - 10 times the cost of the Holoboard (it costs around Rs 10,000).

The benefits of AR

Kshitij feels the low-cost nature of these devices enabled him to sell them to the education, manufacturing, and healthcare markets. This is especially relevant for a developing country like India, where the benefits of AR could reach a mass market at lower price points.

The AR headset and its architecture works with the smartphone. In Holoboard, one can add the hand-tracking module and make it recognise gesture; the user can also add the scene understanding module that can understand the environment and place holograms contextually.

For the 360 VR camera, the five-member team created a consumer version so anyone can start recording 360/VR photos and videos - and instantly share on social media. “We found the current products to be bulky, with extremely bad software prohibiting instant creation and sharing of content over social media,” Kshitij says.

Kshitij, who does not want to disclose his investment in the business, has raised a large undisclosed angel round and believes that this will be a year when Tesseract goes out to raise money.

AR-VR companies are very nascent in India and will scale up only in a few years. Chimera Labs, which focused on advertising, shut down, while others such as VR Devotee, GMETri Studios, Loop Reality, and Parallel XR are trying to raise money and create a B2B or a B2C business model.

Kshitij is going after the consumer market this time and will retail on ecommerce stores and his website. He expects his company to make revenues of Rs 1.5 crore this year, based on the new products and their success. He says the biggest cost is marketing and that the first step is to get people to buy these products.

V Ganapathy, CEO of Axilor Ventures, says, “The acceptance of AR-VR products takes time and only large-scale enterprise and consumer acceptance in this country allows such technologies to scale.”

According to a market research report published by P&S Market Research, the global augmented reality and virtual reality market is expected to reach $94.4 billion by 2023. Increase in smartphone penetration, and advancement in internet connectivity and computer technology are the major factors driving the growth of the market.

Tesseract is on the money about the market. But will it make money and scale up? Everyone’s waiting to know.