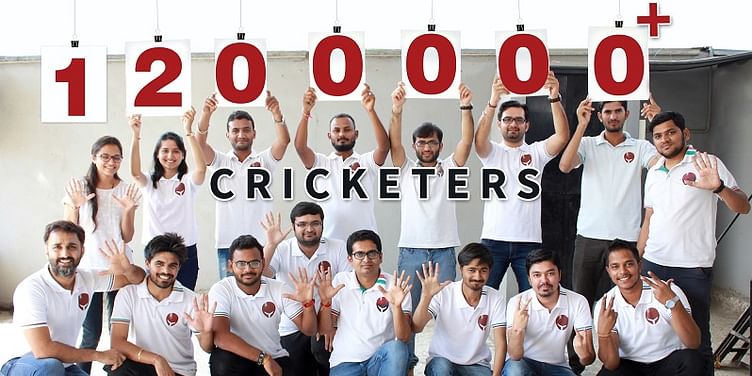 Growing up as an amateur cricketer playing cricket every weekend, the game always fascinated Abhishek Desai. In India, cricket is celebrated like a festival and there are many amateur cricketers like him aspiring to become the next icon. While many coaching centres are there to train them, games are usually scored on paper, leaving no way to track a player’s growth.

In a survey Abhishek conducted in his city, he discovered that 60-70 percent of matches are scored on paper.

“People usually discuss the game after the match. But these discussions are without any data. Once these matches are done,it is not be possible to extract those data. Hence, it becomes impossible to aggregate and find out whether you are improving as a cricketer or not,” explains Abhishek.

He, along with Meet Shah, who has played for Gujarat cricket associations U-15 and U-23, developed the CricHeroes app to solve this gap.

The app helps young players improve themselves by recording every game they play. It also recognises stakeholders like umpires, scorers and commentators, who usually do not get their due credit. CricHeroes lists stakeholders in each area so that users can select them for tournaments.

Eventually, the Ahmedabad-based company plans to list cricket grounds for people to book, shops to buy equipment from and academics that can help players train better.

The CricHeroes app was used in October 2016 for the first time. Today, the team has 17 people and over 38 cricket associations using CricHeroes to score their official matches.

According to Abhishek, amateur cricketers always want to see themselves as international cricketers, or at least see their scores online. CricHeroes helps solve this ‘esteem’ issue.

Meet’s career as a professional cricketer has helped the duo bring several stakeholders and associations on board. His perspective has also helped to shape to build a better product and to improve outreach.

The CricHeroes app is very simple to use and works almost like a calculator. A user only needs to only enter the runs scored, which is automatically assigned to the striker. The app then calculates the run-rate accordingly and automatically starts live broadcasting the match that live can be viewed from anywhere in the world.

CricHeroes has three objectives- to provide a platform for aspiring cricketers to showcase their skills, to recognise talent through features like ‘wagon wheel’ and ‘virtual badge’, and to make them better cricketers. Its target audience includes aspiring cricketers, fans, stakeholders and cricket associations.

The scoring module is free to download and use to score matches or tournaments. But, the app also has several premium features like deep analytics and ways to promote and advertise tournaments.

While it charges Rs 499 per year for a CricHeroes Pro membership, charges for premium features vary from Rs 699 to Rs 6,999.

It took Abhishek around four months to build the first scoring model. Describing this process as a major challenge at the initial stage, he says, “We had to build a scoring model that is easy to use and stable without any errors given the many rules that cricket has.”

Currently, the app has more than 1.2 million registered cricketers and 1.5 lakh monthly active users, with over six lakh downloads on Google PlayStore.

As the name suggests, CricHeroes aims to build heroes in cricket. It differentiates itself from other cricket scoring apps like Cricket Scorer, Chauka, SportsXtramile thanks to one unique feature - it allows users to follow each other and get connected.

The company has raised around $285,000 in three different rounds from angel investors. With a monthly revenue of Rs 1.2 lakh, Abhishek expects the company to grow tenfold in the coming years.

The team plans to be the top app for cricket scoring, and stay ahead of its competition by generating more business and achieving its objectives.