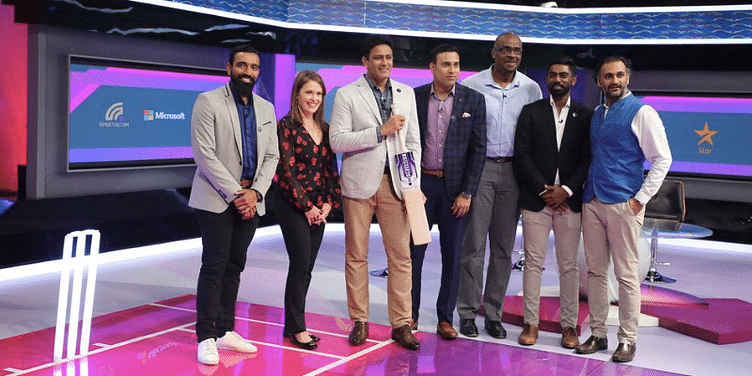 Spektacom has developed a five-gram AI sticker that attaches to bats and throws up real-time data which is processed and stored in Microsoft Azure.

The age of Artificial Intelligence (AI) is truly upon us.

AI has the potential to transform the way several industries function. It makes processes more organised, transparent and accountable. Along with data analytics and the Internet of Things (IoT), AI helps improve planning and decision-making.

The world of sport is not untouched by it either.

Even though ‘sports-tech’ is yet to gain momentum, especially in India, slow and steady steps are being taken to incorporate new, emerging technologies in player training, match analysis, team strategies, broadcasting and so on.

One such AI innovation, a first-of-its-kind, has been brought about by Bengaluru-based startup Spektacom Technologies, founded by former Team India captain Anil Kumble.

Spektacom, in association with Microsoft, has developed an AI chip that attaches itself in the form of a lightweight sticker to cricket bats and turns them into ‘Power Bats’. AI sensors in the Power Bat throw up real-time data on four parameters of a cricket shot - quality, swing, power, and twist.

This data from the AI chip is then fed into a stump box, captured and processed using Microsoft’s Azure Sphere (its platform for IoT applications). After that, the data is stored in Microsoft’s Azure Cloud platform and provided to players, coaches, trainers, broadcasters, commentators, and viewers during a live match or even after that.

Both Spektacom and Microsoft believe the introduction of new technologies would go on to improve fan engagement and benefit the players too.

The product has been incubated and launched by Microsoft under its ScaleUp programme (that offers sales, marketing and technical support for startups). Peggy Johnson, Executive Vice President, Microsoft, said:

“We’ve already seen the impact that connected devices have had in other industries, and we believe that with the advancements in our AI and cloud services, this is just the beginning of what’s possible for not only cricket, but all sports.”

Any wireless charger can be used to recharge the AI stickers. Charging takes about 90 minutes, and one round of charge lasts 48 hours. Johnson added,

“More intelligence can be added to the product in time. More parameters can be tracked. And the product could even be taken to other sports beyond cricket.”

Star India, which owns the TV rights to all BCCI matches, has been roped in to popularise the use of Power Bats in commentary and live telecast. “We’re excited to be a part of the work Spektacom and Star India are doing to enhance the cricket experience for fans, players and coaches,” Johnson added.

Incidentally, Spektacom debuted the technology at the Tamil Nadu Premier League (TNPL) earlier this year, and most batsmen have reported positive feedback on the product.

In a post-event conversation with YourStory, Anil Kumble, Founder of Spektacom, said,

“Some of the domestic players have used it. Our goal is to increase adoption in international matches and tournaments. We are looking at the 2019 World Cup. The more number of players use it, the more data we capture.”

Because the AI sticker weighs only about five grams, it does not bring about any significant change to a typical cricket bat. The sticker is attached on the shoulder of a bat closer to the sponsor label.

For international cricketers to adopt these Power Bats, clearances from respective cricket boards might be required. An optimistic Kumble said,

“The intention is to take it to grassroots. We will make it affordable and accessible to everyone who wants to play the sport. There wouldn't be any hindrance as far as permission is concerned.”

As a few former players pointed out, the Power Bat could well be a rage in the upcoming IPL.