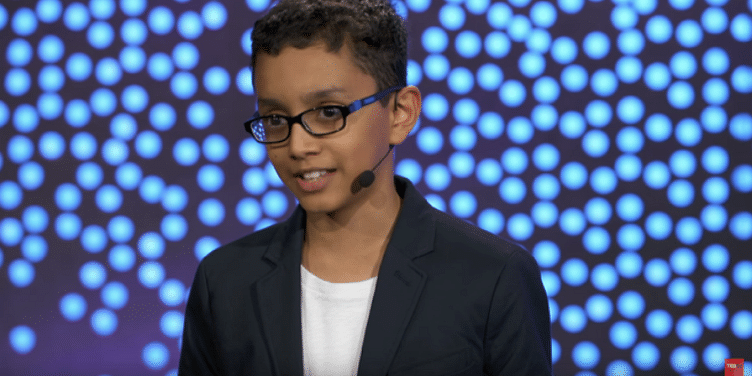 Haaziq Kazi from Mumbai has designed a ship ERVIS that could help suck waste out of the surface of oceans.

This child prodigy designed a ship that sucks waste out of the surface of oceans as part of a school project. Speaking soon at the #TEDxGateway event in Mumbai, Haaziq Kazi's ship is grabbing attention for all the right reasons.

Kazi says that he was inspired to design ERVIS when he was in school. Indus International School asked its students to come up with a project, and conduct a TED Talk on it. Inspired by documentaries on the National Geographic channel on plastic and its impact on marine life, Kazi started his research. During this time, he came across Dutch inventor Boyan Slat’s TED Talk on how he intended to tackle the ocean’s plastic problem, reports The Better India.

“I figured I could create a ship, which can go and reverse the damage that we, as humans, have done. Hence the idea of ERVIS was born,” he said.

When asked about how he feels when he is called a child prodigy, Kazi said,

“I don’t think about it too much. My life goes on, as usual. It’s the same school, same assignments, same home, same friends and so things haven’t really changed much. Except sometimes, it does feel good when people talk about it, but being an introvert, I don’t like talking too much about it. And when I sometimes really think about it, I feel a bit overwhelmed visualising the problem I am trying to solve”.

He has been working on this since 2016, and has collaborated with few scientists and designers to come up with a prototype of the same with the help of a 3D artist, says Rediff. Thanking his parents and school for their support, he said: “ERVIS, my dream, my passion.”

Speaking about the roadblocks, he said:

“I was figuring out on what I wanted ERVIS to do, understanding the magnitude of the problem and how I don’t end up having ERVIS contribute to the problem that I am trying to solve. Did you know that one of the biggest contributors to the waste problems are ships, which are in the ocean? They use high sulphur fuel and dispose waste in oceans. I wanted ERVIS to address the problem by using cleaner fuels like hydrogen or RNG and do waste collection from ships in oceans.”

ERVIS will be powered by cleaner fuels like solar, wind, RNG and hydrogen. Speaking about how the ship was only created for a school project and nothing beyond, he said,

“To be honest, nobody thought ERVIS had a future at the time. My mum was super supportive. They were always proud of me about how I applied my thought process on a problem that I felt passionate about, but that was about it.”

Kazi added, “The sheer magnitude of the problem represents an opportunity of massive scale, the opportunity for us to come together through ERVIS to tackle the problem we have created”.

He also confessed to being an admirer of Elon Musk and the work he is doing with HyperLoop and Boring Company, says a blog post on Miss Malini.