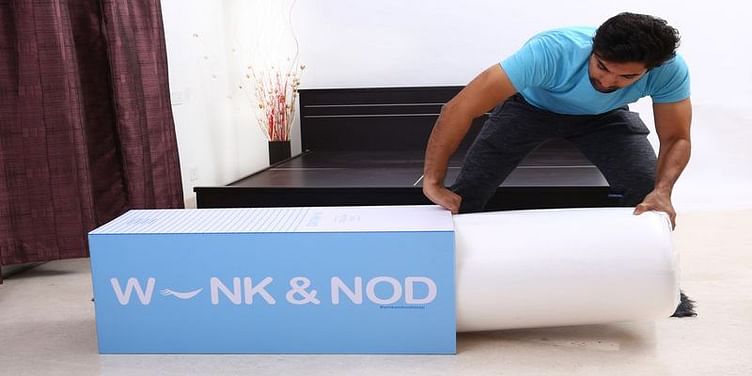 Millennials have a sleep problem. A good, rejuvenating mattress can solve it. Or so believes Wink & Nod, an 18-month-old startup from Pune that offers innovative memory foam mattresses covered with bamboo fabric.

Sandeep Prasad was a venture capitalist in Florida, US, before he returned to his hometown, Pune, in 2017 and started Wink & Nod, a “sleep-focused” company that makes and sells memory foam mattresses and pillows.

The startup idea didn’t occur to him in his sleep. Sandeep’s mother helped him identify a pain point. “My parents lived in Pune and they had to hunt for a good mattress for two to three weeks, but ended up buying an expensive one for Rs 30,000 or so. When I asked my mother what mattress it was, she had no clue,” the founder tells YourStory.

Around this time, Sandeep was also handling investments for various consumer brands in the US, one of which was making innovative sleep products. Sleep-related products were a burgeoning market in the West, given how elusive sleep had become in the lives of millennials. It piqued Sandeep’s curiosity, and he “wanted to know what was happening in India”.

A few months of research ensued, and he discovered that the domestic mattress market was largely driven by traditional players like Kurlon, Sleepwell, and others. Not only was the distribution model broken, but there was also “confusion” over product categories from a consumer’s point of view. The cost too was superlative “for something that was not even good”, Sandeep notes. “There was a lack of innovative products. And good mattresses weren’t affordable,” he says.

That is when he decided to quit his VC job, get back to India, team up with a few people from the ecommerce and logistics sector, and eventually, launch Wink & Nod in July 2017. “I always wanted to start a business. It was about finding the right pain point and taking the risk,” he says, adding that he had some experience growing an ecommerce business in the US. “We took four to five months doing the R&D before coming up with the first iteration of our product”.

In about 18 months since then, Wink & Nod has gone from mattresses to pillows, and from selling on its own website to retailing on Amazon. It will soon launch on Flipkart and Pepperfry too.

Without revealing the number of units sold, Sandeep says revenues have grown approximately 10X in the past one year with 30 percent improvement in margin, and the business has been cash-positive from Day 1. He also adds that Amazon helped increase its brand reach, and now accounts for 20-30 percent of sales.

It started selling pillows only recently, and that has helped reduce the entry barrier to gaining new customers. Sandeep says, “We see a lot of people trying out pillows first, and then looking at mattresses. It creates an opportunity for us to up-sell.”

The startup focuses on India’s solvent upper middle class in the metros: Bengaluru, Hyderabad, Pune, Mumbai, Chennai, and soon Gurugram. “These are ‘migrant cities’ where people love to buy furniture online. And now, with the likes of Pepperfry, customers are much more knowledgeable about what they want. We’re targeting this segment,” Sandeep states.

So, what separates Wink & Nod from market incumbents like Kurlon, etc.?

Two things, according to Sandeep: One, it offers a significant price advantage. Two, its products are cool (literally) and innovative.

“We use international cool-gel memory foam, and do not source anything locally. The cover of the mattress is also done by us. We found a material called bamboo fabric that is soft, luxurious, well-ventilated (making the mattresses cool), and is a natural fibre. We’ve always been a product-first company.”

A mattress that is cool to the touch in the midst of sweltering summers has worked as a definite plus. Add to that a 100-day trial policy and free delivery within three to four days (in contrast, Pepperfry or Urban Ladder take seven to 10 days, sometimes even two weeks, to deliver a mattress), and Sandeep seems to have found the right mix. Wink & Nod’s product return rate is about 5-7 percent, which is below the industry “standard” of 15-20 percent, says the founder.

An average 7-inch mattress by Wink & Nod is available for about Rs 13,000, while traditional brands tend to retail at a cost upwards of Rs 20,000. Until now, memory foam mattresses were available only at price points of Rs 80,000 or above. Wink & Nod has made the entry point significantly lower without compromising on product quality, claims Sandeep.

Its mattresses are designed in a way that they can be compressed and fitted into 4 ft x 2.5 ft boxes, reducing warehousing and shipping costs for the company. It makes them much more convenient to handle as well. “These are the cost advantages we’re able to pass on to the customer,” Sandeep says.

However, what it saves as production cost, it spends on import duty. And this has been the startup’s “biggest challenge” so far.

Wink & Nod wants to set up a manufacturing facility in India to bypass the import duty challenge. It might happen by 2020, the startup reveals. Sandeep adds, “The ease of doing business in India is not that great still, especially if you want to be clean. And import is the biggest black hole in the country.”

But, when a $4 billion market opportunity beckons, it’s not something you ignore. Wink & Nod competes with the likes of Wakefit, SleepyCat and Sunday in the online mattress segment, but traditional offline mattress-makers like Sleepwell, Kurlon, Duroflex, and others are competition too.

Sandeep believes that he can grow the business by 3-4x in the next two years.

In 2018, Wink & Nod raised undisclosed seed funding from Guild Capital, an early-stage VC firm from Florida. It is looking to raise some debt this year to fund its brand-building activities and retail expansion.

In the long-run, Wink & Nod wants to be an end-to-end sleep products company owning everything from mattresses and bed sheets to candles and even chai that induces sleep. Yes, that’s a thing!