These entrepreneurs sold their ventures to Google, Yahoo. Now, they're building a Blockchain startup 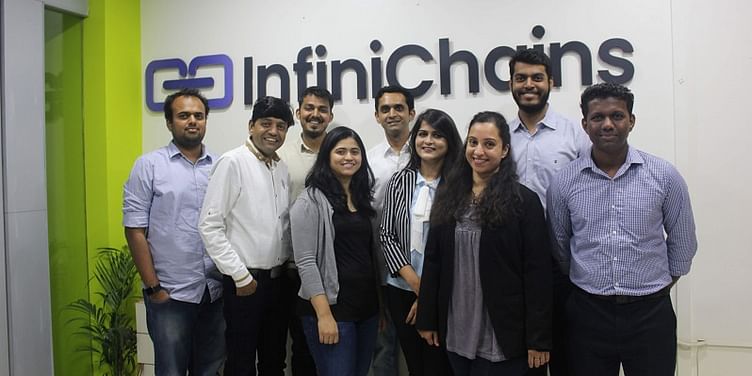 InfiniChains, a Blockchain-powered startup based out of Pune and San Francisco, has raised Series A funding to build its technology platform and grow its sales, and marketing channels across the globe.

Blockchain-powered startup InfiniChains has raised a Series A round of $2.4 million from the family office of Purushottam Agrawal, Founder and Former Chairman of Ajanta Pharma Ltd. Started in 2018, InifiniChains leverages the power of Blockchain to prevent counterfeiting, enable traceability and authenticate the origin of materials in the domains of fashion, textiles, and pharmaceuticals.

According to the founders, InfiniChains will hire domain experts and product managers across its offices in Pune, San Francisco, and Uganda. This will take the total team strength of the company from 13 to almost 33. A bulk of this hiring will be in the technology team in Pune. It will also invest the funds to further its reach by building a pipeline of channel partners, who will resell on its behalf.

Discovering the possibilities of Blockchain

Co-founder Parth Patil has worked in Silicon Valley for 15 years, including with Garett Camp, Founder of StumbleUpon, who also co-founded Uber. While working for Garett (at StumbleUpon and later at Uber’s accelerator), Parth was inspired to set out on his own entrepreneurial journey.

His first startup, Promote, was acqui-hired by Yahoo just last year. In 2016, Parth wanted to do something in the sustainability space and stumbled upon Blockchain technology. Convinced about its power to disrupt, he started experimenting with some proof-of-concepts, in domains with multi-party transactions.

At this time, Parth was constantly in touch with his childhood friend, Jitesh Shetty, who liked the proofs of concept (PoCs). Jitesh, who pursued a degree in Computer Science at University of Southern California with Parth, was then working on QwikLabs Inc, his education venture that was eventually acquired by Google in November 2016.

Read more: Amid funding crunch, here are the Indian Blockchain startups that raised capital in 2018

While, developing the PoCs, Parth met Purushottam Agrawal, Founder of Ajanta Pharmaceuticals who believed in the vision. With $100,000 in seed investment from Jitesh and another childhood friend, Sushil Choudhari, Infinichains was incorporated in 2018.

“We wanted to leverage Blockchain in verticals where there isn’t intrinsic trust. These included sectors like textiles or drug pharmaceuticals where one takes time to trust brands.”

Ravi Agrawal is the third co-founder of the business; he joined later in 2018 and is currently the Chief Strategy Officer.

InifiniChains works as SaaS-based scalable platform for stakeholders in a supply chain, capturing data from existing systems on to the Blockchain with the help of set business rules, making it tamperproof.

On how it benefits clients, Jitesh explains,

“Earlier, companies in the supply chain didn’t have a digital platform to showcase data about their product in a comprehensive way, for things like auditing by national and international agencies. InfiniChains offers just that. We are also in talks with certification bodies for making our platform a standard practice. We want to be a single source of data of different products, connecting all layers of the supply chain.”

While businesses are one part of the story, the platform also wants to allow consumers to track the lifetime of the product, from the origination to the time it hits stores. This helps consumers establish trust in the product they are buying. InfiniChains is currently in talks with retailers to put QR codes on garments so customers can scan the entire life journey of the product at stores, before buying it.

“On the textile side, the InfiniChains platform integrates with a textile client’s independent systems and does the heavy lifting of collecting comprehensive data sets and puts it on the Blockchain. This includes information from where the cotton was procured to the ginning mill it was processed. The next step is to put QRs on the garment for customers to know the life journey of the product to create that trust.”

At present, the startup is working with Pratibha Syntex, a knitted textile product company, and the government of Uganda.

Pricing of the product

InfiniChains, which is still figuring out the business model, has two various pricing models at present. It charges companies based on per SKU (product) tracked, and offers a fixed pricing to clients (payable on a quarterly or annual basis). However, the founders did not disclose exact pricing as it differs for different clients.

The founders say another way of pricing the product is by including the platform cost in the MRP of the final product. However, InfiniChains is still in early-stage discussions with retail partners.

Parth says at present the company is focusing largely on increasing adoption of the platform by providing free trials to clients, so they understand the value add.

Jitesh says the company is aiming to track close to 100 million SKUs and hit 500 million transactions on the platform by FY 2020. On the business side, the company aims to enter verticals of organic food and mining in the coming year. It plans to have more than 30 clients by the end of next fiscal year.

The World Economic Forum believes 10 percent of global GDP will be stored on Blockchains by 2027. Gartner forecasts the business value-add of Blockchain will reach $176 billion by 2025, and exceed $3.1 trillion by 2030.

Closer home, regulatory bodies and think-tanks are waking up to the potential of Blockchain. In March last year, government think-tank NITI Aayog was reportedly working on a national strategy for Blockchain, which was supposed to identify areas where India can implement the technology.

However, funding in Indian Blockchain startups continues to be sparse. According to YourStory Research, only four startups raised funds from investors in the first six months of 2018.

Also read: ‘Cooking Maggi will not make you a cook' – 55 quotes from Indian startup journeys