From a refugee camp outside Kolkata to a master of French-Indian art in Paris: the remarkable story of Shombit Sen 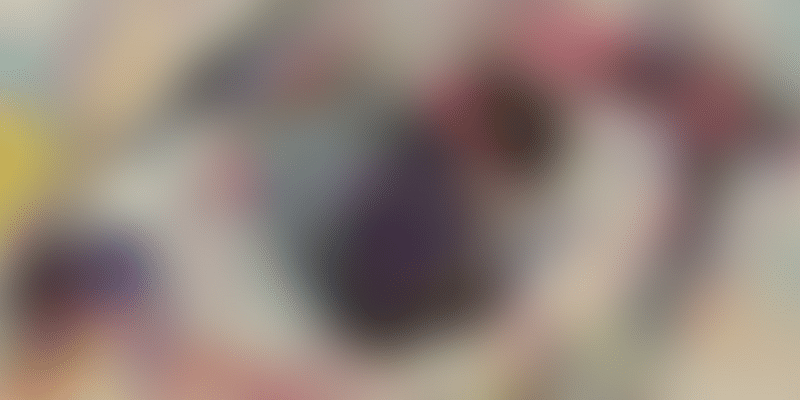 In this photo essay, we showcase the ‘Gesturism Art’ of award-winning French-Indian artist Shombit Sen, along with his insights on creativity, culture, and purpose.

This artist has a remarkable story. He was born in 1954 in the Shohidnagar refugee camp near Kolkata. At age 12, he stumbled upon Chandannagore, a former territory of France, which influenced him to embark on an artistic journey. He was admitted to the Government College of Arts and Crafts in Kolkata, and then set off to Paris at the age of 19, with $8 in his pocket.

He worked at a lithographic printshop, and studied art at the École Nationale Supérieure des Beaux-Arts and Academie Julian Penninghen. Today, award-winning artist Shombit Sen divides his time between Bengaluru and Paris, and has created his own unique art form called Gesturism Art. His works have been displayed in the Louvre, Grand Palais and Champs Elysees in Paris.

With a spontaneous free-flowing style, he specialises in abstract art with hidden figures, thus combining figurative with abstract art. The colours, shapes, and figures tease the mind, and yield multiple interpretations. The free and irreverent use of colours is influenced by Indian social life and “harmony in diversity”, which he immersed in after his return to India in 2003.

“Indian life is so colourful – look at our saris, no two are the same. Our weddings are so colourful also, as compared to Western weddings with white dresses,” Shombit joked, in a chat with YourStory.

Western culture has well-defined colour norms and codes, whereas Indian interpretation of colour is more irreverent, Shombit explains. When he lives in Bengaluru, he spends a lot of time buying colourful items from Chikpet markets. His shirts and even his spectacle frame reflect his love for colour.

“I breathe France with Indian colours,” says Shombit. Well versed in European art history, he has retraced the steps of many French masters, immersing in the rural and urban centres that were their source of inspiration.

“India has lost its fine arts values over the past centuries. Art can uniquely take people to another level. For India to become a developed country, it must value art and not just technological or economic advancement,” Shombit urges.

“Art is a driver of value, a driver of development. It is more than just a profession. Indian business houses must take an active role in supporting art. Leading European businesses are also art patrons – they have started museums and galleries, and support art and festivals,” Shombit observes.

“Since liberalisation, China has launched 40,000 art galleries. Only 100 galleries have been launched in India after economic liberalisation,” he explains. China is now a major art buyer in the West, the way the US itself launched its art journey earlier during its economic rise. Art played an important role in Europe’s renaissance as well, he adds.

In the free-wheeling conversation about his journey, Shombit also showed his sense of humour and humility, recalling how he did not know how to use the in-flight seat belt, or even how to sit on a Western toilet. “Admit your ignorance, submit yourself to the journey of learning in whatever you do,” he says.

Other incidents he described are how he took up sweeping studios to support himself monetarily in his early days in Paris, and also slept in stables so that he could better understand horses in order to paint them.

Patrice de la Perriere, Director of magazine Univers des Arts, likens Shombit’s work to “colourful beaches,” and even “great wines that develop their aromatic power and taste over the years” and continue to reveal “unsuspected treasures.” The artist’s uninhibited strokes “blend and collide,” according to Indian art historian Suresh Jayaram.

Corinne Asseraf, Founder and Director of Montreal’s Galerie 203, highlights the “bicultural aspect in his paintings that combine Western style and structure with cheeky Indian colours.” One of Shombit’s works is a collection of small canvases on a set of wooden frames that can be arranged in various ways, thus allowing curators like Corinne to experiment with different formations.

In a boxed area on Lavelle Road, Gallery Time and Space also features the Renault Kwid Art car which was painted by Shombit at Renault's Design Center in Chennai. It depicts rural themes on the car in his trademark gesturism style.

In this photo essay, we feature some of the interconnected faces, forms, humans, and animals hidden in Shombit’s art works, on display at Gallery Time and Space in Bengaluru. The beauty of the human body and of animals like horses are a recurring theme. They may come across as strange at first, but the delight is in the mystery.

“Even the body imagery is presented in a natural form, with freedom. Indian viewers have accepted these depictions,” explains gallery director and curator Renu George. The range of art works connects to everyone’s experiences, and are universal in nature, she adds.

Even the names of the paintings connect to our journeys: Up Close, Enchantment, Intrigue, Lure of the Wild, Emotion in Motion, Musing, Jubilant, Suspicious, Warmth, Reflective, Ruminating, Caring Touch, Ballad, Gaiety, Chasing a Reverie, and Abundance of Love.

“To be a successful artist, you have to create your unique style. People should be able to recognise your art works even without your signature. But it need not be a major paradigm shift,” Shombit explains, giving tips to aspiring artists.

“Develop an intuitive way of thinking. Show deep respect to society and nature in your work. Be proud of the levels to which art can take you and your audience. Have confidence and consistency, and don’t be swayed by naysayers,” Shombit signs off.

Now, what have you done today to not just find out who you are, but become all that you can be?