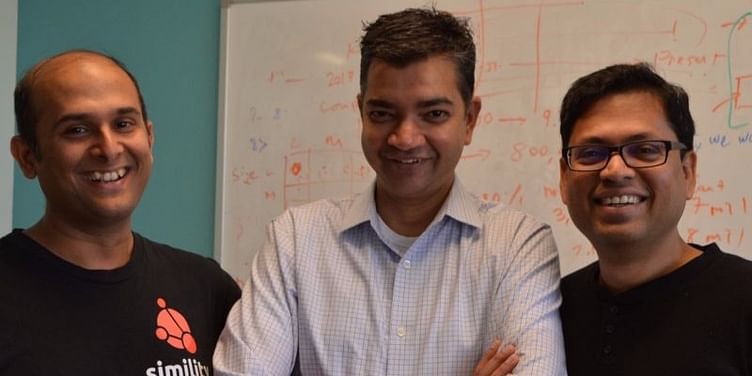 Started by ex-Google and Amazon employees in 2014, Simility is a California and Hyderabad-based fraud detection startup that was acquired by PayPal for $120 million in June 2018. We caught up with Co-founder Rahul Pangam on his entrepreneurial journey and what it is like to be part of PayPal.

At a time when organisations are racing against each other to gain an advantage by providing smarter solutions to their customers, California and Hyderabad-based Simility, a fraud detection startup, caught the eye of global payments provider PayPal.

After all, it isn’t every day that one of the world’s oldest fintech giants, with a market cap of $111.47 billion, comes forward to acquire an Indian company for $120 million. At the time of acquisition, Simility was valued at $53 million (according to data from PitchBook).

As an organisation, PayPal had always invested in startups in the financial services and fraud detection space. In 2018, Simility was on-boarded as a partner to build different risk management capabilities for different needs and requirements of the fintech giant’s merchants.

“It just isn’t about who is acquiring who. It is about synergies and if the visions are the same. We had started with one basic technology - to detect fraud, but when we had Indian clients and commerce customers, we realised the kind of fraud that could be done for smaller amounts in larger volumes. PayPal brings in detailed and deep expertise and insights into the field, which makes it easier to build solutions.”

Before the acquisition, PayPal had been an investor in Simility along with Accel India, Trinity Ventures, and The Valley Fund. The company had raised $24.7 million in total from its investors.

After the acquisition, PayPal saw that its merchants were able to easily and effectively use Simility’s technology to adjust their fraud controls.

However, the team’s vision for Simility was to create an adaptive risk management platform that empowered organisations operating in a digital world to manage an evolving fraud and risk landscape where data breaches are the new normal.

“In four years, I had begun referring to Simility as the smallest global office in the world with operations in Palo Alto, Hyderabad, London, Amsterdam, and Sao Paulo,” says Rahul.

But the team knew that unless its fraud detection systems reached scale, it wouldn’t be able to create impact.

“In an entrepreneur’s life cycle, the highs can be really high, and the lows can be super low. The tradeoff we had to make seemed small to the kind of growth and impact we could make with PayPal. From ground zero, we would be able to reach over 250 merchants,” Rahul says.

In June 2018, the acquisition was complete and the entire Simility team became a part of PayPal.

In its four-year journey, from 2014 to 2018, Co-founders Rahul, Kedar Samant, and Uttam Phalnikar built Simility to address the issue of online frauds and built software to detect them in the ecommerce and financial services domains.

“The minute companies made it easier for users to go online and transact, a new variety of people started transacting online - people who had never used any kind of formal financial infrastructure or had no internet/credit records,” Rahul says.

Now, in order to create a frictionless experience, and get more consumers online, companies made the process simple – by just using an email id to onboard them. This meant there was limited consumer data. But with time, there was an increase in online transactions by these very users. This is where technologies like AI, ML, etc., were being created to better understand consumer behaviour.

But with that change in user behaviour came risks. People looked at different ways to crack into systems. Hence, companies like Simility had to stay on top of their game to track information breaches and scenarios, where consumers and their data could be easily compromised.

Rahul says that between 2005 and 2018, close to 1.1 billion records were compromised in the US alone. These included tax details, individual ids, and other details.

Also read: Why this SoftBank-funded European ‘unicorn’ is not looking to lend in India

India, too, has seen its fair share of data breaches. Be it startups, banks, or companies, data security has become an important aspect for anyone collecting any data.

Rahul says this is because today India is where the US was a few decades ago, and many people are coming online for the first time.

“For many large and small merchants, systems like ours become important. Simple issues like how do you assess if the person making the transaction is a real one, or is someone using a fake/wrong id need to be detected. The idea is to be nuanced, not put friction to the users, and at the same time be able to assess and detect fraud,” he says.

He adds that they initially assumed that every phone has one IMEI (International Mobile Equipment Identity) number. “But when we started here, we realised that these could be doctored,” Rahul say . It was these capabilities that PayPal felt could help it as well. Especially with the team looking to aggressively grow in India.

How does it help PayPal?

At the time of acquisition, Bill Ready, COO, PayPal, said, “Digital commerce has exploded, and fraudsters have taken note, adapting and developing new methods to carry out their crimes.”

He says PayPal had been at the forefront of developing innovative fraud prevention and risk management solutions for nearly 20 years, but merchants were not able to configure these solutions to manage the complexities of their business.

With Simility, PayPal can now put more control in the hands of merchants to detect fraud. The acquisition works in line with PayPal’s vision of offering small online merchants and players the same convenience and capabilities as larger commerce players. The deal also works in its favour since Simility has its core operations in India and the US, and aligns with Paypal’s larger plans for India.

Commenting on the acquisition, one of Simility’s earliest backers, Accel India, which had led both Seed and Series A rounds in the startup, wrote on its official blog,

“It’s always rewarding to see our companies grow in impact and importance. With this acquisition, PayPal is paving the way for Simility to fast-track its product-building efforts alongside its own world-renowned fraud prevention teams, and is enabling them to automate risk management and transaction security.”

Currently, it is early days of the acquisition, and the team isn’t willing to share its plans. But post-acquisition, Simility plans to work on two fronts:

The team is currently in the process of integrating with PayPal, and Simility believes it can achieve great heights and create great impact with this scale.

“We are making predictions of what will happen five to 10 years from now, but the idea is to move fast and get things going at a faster speed. We might be a part of a larger company, but the goals are the same,” Rahul says.