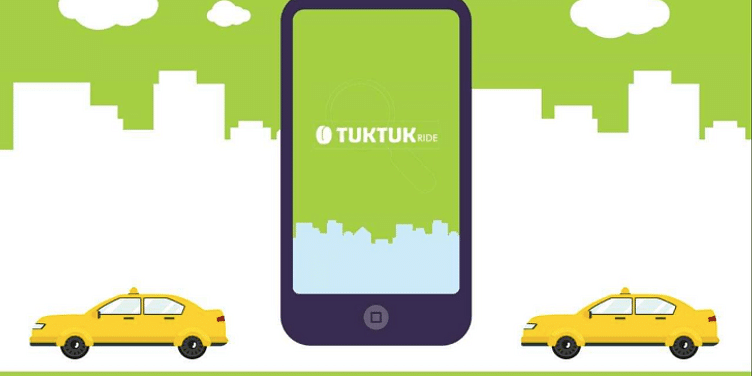 TukTuk Ride is taking on the likes of Ola and Uber and wants customers to enjoy cab rides at auto fares. It also wants drivers to be satisfied and always busy. Here's how the Noida-based startup plans to go about it.

It might be safe to suggest that most urban Indians have used an app-based taxi service at least once, if not more, in the last few years. Because… well, “convenience” is too hard to ignore, especially if one gets it with just a few taps on their smartphone.

As a result, India’s ride-hailing market is on an upsurge. Currently dominated by Ola and Uber, the sector is estimated to be worth $675 million in 2019, and $1.13 billion by 2023. And yet, penetration of app-based taxi services is only about 2 percent (expected to hit 2.9 percent by 2023), according to Statista.

This is primarily because most taxi aggregators, so far, have focused on the top 10-12 cities and tapped into urban demand to build up buzz, cultivate usage, and become more visible. Even though Ola and Uber have launched services in a few Tier II towns, their approach remains top-down, more than bottom-up. And, this is what Noida-based entrepreneur Yash Kapoor wanted to change when he conceived TukTuk Ride in early 2018.

TukTuk Ride is India’s latest app-based ride-hailing service that launched in Delhi-NCR in January, after about 10 months of being in development. It will roll out in Indore, Bhopal, Kanpur, Lucknow, Jaipur, and Udaipur by the end of the year. And by 2020, TukTuk will ride into 20 small towns, where smartphones prevail, but app-taxis are absent.

“These are towns where the Ola/Uber service is very poor or entirely missing. They are not focusing on these places even though people here are aware of ride-hailing services. They have their smartphones, they use apps, and they want to take a cab ride. Agar everything is digital today, phir cabs kyun nahi?”

TukTuk Ride promises round-the-clock, hassle-free and cost-effective rides to customers, its core proposition being “cabs at the price of an auto”. Customers are charged a flat rate of Rs 14 per kilometre, and there is no surge pricing or cancellation fee. Additionally, the first ride is free.

TukTuk also lets riders hail bike taxis at Rs 8 per kilometre. In future, it plans to expand to other verticals such as luxury cars, vintage cars, e-bikes, delivery vehicles, ambulances, and more. Essentially, Yash wants to build an end-to-end “transportation network” as opposed to just a taxi service.

“It is a demand-and-supply game at the end, and given India’s huge population, there is demand in every category. If we can cater to even 1 percent of that, we’ll be a successful company,” he explains. “Very soon we’ll be starting e-bikes in designated smart cities. We’re already exploring contracts with the government,” he says.

The bootstrapped, 28-member startup has also roped in Tata Motors and Maruti as cab partners, TVS as bike partner, and Hero as electric vehicle partner. “We’ve funds to last us another year. We could look at funding and a pan-India rollout after that,” Yash reveals.

The focus on driver-partners

TukTuk Ride reckons that drivers serving cab aggregators in India are majorly “dissatisfied”. Their earnings are low (given companies take away sizeable commissions), the pressure to complete a certain number of rides is high, payments are delayed in many cases, and so on.

“I spent months taking cab rides in Delhi-NCR and spoke to hundreds of Ola/Uber drivers. Most were unhappy because companies don’t focus on them. They are busy chasing customers. So, we decided to build TukTuk as a driver-centric platform.”

At present, TukTuk charges zero commission from its 5,000 drivers. It also urges riders to make cash payments to ensure immediate earnings for drivers. (Wallet payments will soon be enabled.)

“We wanted to earn the trust of our drivers. These are blue-collared business partners, they have bought vehicles costing Rs 4-5 lakh,” says Yash, adding, “We don’t want lakhs of unhappy drivers on our platform. If we can have one lakh satisfied ones, we’ll be successful because they will be loyal to us.”

TukTuk, in fact, rolled out its driver application three months prior to launching the customer app. It expects drivers to take a minimum of five rides per day, which is significantly lower than industry standards. The startup also aims to bring down the number of cabs operating without a proper licence, old and polluted vehicles, and curb instances of sexual harassment by unlicensed drivers.

Yash is clear on where TukTuk stands in India’s cluttered ride-hailing market. “Nobody can pay drivers more than Ola/Uber. But, we want our drivers to be always happy and continuously busy. We don’t want cancelled rides or delayed payments,” he says.

Also Read: Not sure about buying an electric bike? Rent one from eBike and do your bit for the environment

With a business model as this, the startup is naturally losing money per ride. Add to that, there is no external funding so far.

But, Yash asserts that TukTuk is “not looking at margins” and he’s saved up enough for now. He’s also confident that by 2020, when all partnerships and contracts fall in place, the startup will be cash-positive. And eventually, it will start charging driver commissions too.

As for riders, says Yash, “We are telling them to wait five minutes for a cab instead of two minutes for an auto. The rate is the same.”