[Startup Bharat] Inspired by Iron Man, these engineers have built a manhole-cleaning robot that can end manual scavenging 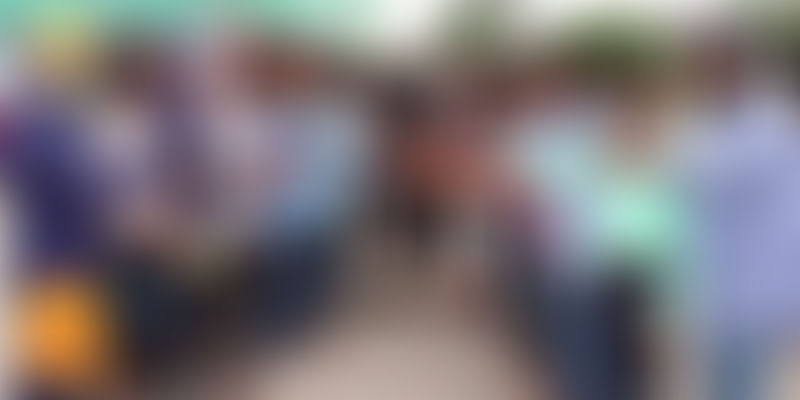 Thiruvanthapuram-based Genrobotics hopes that Bandicoot, their 50-kg, remote-controlled robot, will end manual scavenging. The robots have been deployed in five states, and may soon make their way to the Middle East.

At a time when cars can drive themselves and homes can take orders on what to do next, India continues to grapple with manual scavenging and manhole deaths. A central government taskforce count in 2017 pegged the number of manual scavengers in 121 of the 600-odd districts of the country at a whopping 53,236.

Media reports suggest there have been over 300 manhole-related deaths in India over the past three to four years. So, what good is technology if it can’t help save human lives?

Four young engineering graduates decided to do something about it and launched Thiruvananthapuram-based startup Genrobotics, which is attempting to end sewer deaths and clean up manholes with Bandicoot, a spider-shaped robot.

The 50-kg, pneumatic-powered, remote-controlled robot can be sent down a manhole where it spreads its limbs and removes sewage. The robotic arm, which uses 360-degree motion to sweep the manhole floor and collect the filth, could well end the practice of manual scavenging in India.

But how did it all begin? Vimal Govind MK, Arun George, Nikhil NP, and Rashid Bin Abdulla Khan took their love for science and Iron Man to a new level with Genrobotics, which was launched in 2015.

Interestingly, the startup began life as a college project at MES College of Engineering, Calicut.

“The idea of science and engineering is to help mankind. At college, we were a part of different social events and activities. We felt we needed to bring in a technological element to different social issues,” Vimal says.

The team decided to create Genrobotics, a team of engineers who would build different products for the social sector. They began by building an “Iron Man suit” with a difference.

“Many people in the defence and construction sectors have to carry heavy weights. Soldiers have to carry close to 70 to 80 kg of weight and walk long distances. We designed and built a prototype of a robotic Iron Man suit, which would make the bulk weightless and easy to carry. The individual had to just wear the suit,” says Vimal, adding that the machine would do the work.

Also read: [Startup Bharat] Kochi-based Appmaker has clients from 35 countries, and aims to be Shopify for mcommerce

The prototype was displayed at various festivals and presented at the American Society of Research in Singapore to several countries. Not long after, the Kerala Startup Mission invited Genrobotics to be a part of their incubation programme and take form as a startup in Thirvanathapuram.

The team went on to design generation two of the suit. However, they faced the one challenge every startup faces: lack of funds. “There is need for funding when it comes to manufacturing, prototyping, and testing. We didn’t get the money we needed to get the raw materials or create and test the product,” Vimal says.

They decided to shelve their work and get back into the workforce. A few months later, in 2015, an incident in Kozikode led them to shift track. A 32-year-old autorickshaw driver lost his life trying to save two manual scavengers from a pit; the three were stuck in the manhole for 30 minutes and nobody could help. The government of Kerala then approached the four engineers and asked if they could build a product that could completely eradicate manual scavenging.

“We started researching and understood how deep the problem was. It wasn’t just about hygiene or the social issue; it was also taking many lives. We came up with the idea of Bandicoot,” Vimal says.

Restarting with a Bandicoot

The four engineers realised that the problem could be solved with technology. Quitting their respective jobs, at IT companies, the friends returned to Kerala Startup Mission and restarted Genrobotics.

But the task wasn’t easy. The team had to perform different kinds of tests and runs to see if something like this could be built. Alongside, they had to actually work on registering the startup, set up an office, and build a team. They worked with friends and college interns initially. Soon, they built a prototype, got that tested, and followed it up with the beta product, which was deployed in a few areas.

The Bandicoot can be dropped into manholes to unclog them and scoop out the debris, which is then transported to waste dumps. Working like a bot, it uses machine learning and artificial intelligence to determine the amount of unclogging needed. Bandicoot can complete work that would take three to four hours manually in in 45 minutes.

What about the jobs lost?

Genrobotics’ first on-ground challenge was employment. “While manual scavenging is not something that needs to be a part of societal construct, it is a source of income for many households. So we thought of rehabilitating these people,” Vimal says.

He says they decided to involve the men in operating the Bandicoots. “The next version we built was easy to understand and operate. Anyone with zero technical know-how can operate the Bandicoot. We train and work with these men on using the robot,” Vimal says.

The team claims to have rehabilitated more than 100 manual scavengers till now.

Genrobotics has a manufacturing setup in Thiruvanathapuram, and will soon set up another one in Pune. Raw materials are currently sourced from original equipment manufacturers in China and India. The team also imports material for technology from US, UK, and Germany, and is also looking to tie up with other manufactures in China.

Bandicoot is priced between Rs 15 lakh and Rs 35 lakh. The team works with municipal corporations and has two models: sale and rental. For the sales model, the team sells the robot and offers training sessions to the corporation. It also allows the option of renting a robot and availing training.

Currently, Vimal and the core team of Genrobotics are in Vadodara to deploy Bandicoots in Gujarat. The robots - 15 of them - have been deployed in five states: Kerala, Tamil Nadu, Andhra Pradesh, Haryana, and now Gujarat.

Genrobotics has also signed memoranda of understanding with Dubai Municipality, Sharjah, and Qatar. “We are working on the next version of the product. And are signing on more states and municipal corporations,” Vimal says.