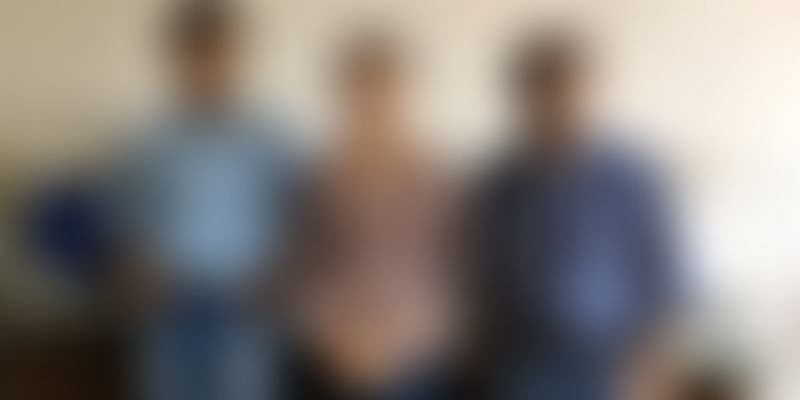 The clanging of metal and sparks emanating from boiling-hot slag are common at fabricator shops in Jalan Complex, in the industrial centre of Howrah, Kolkata. The sweltering location also houses a small R&D lab outfitted with testing instruments, spectrometers, oxygen analysers, muffle furnaces, and ball mills. This isn’t exactly where you would expect to find IIT alumni at work. But Anisha Banka, Mukesh Kumar, Arpit Dwivedi, and Tanumoy Bar, students from of the 2017 and 2018 batch of IIT-Kharagpur, chose to start up here.

Their idea was simple: to go after SMBs and heavy industries that spend less than two percent of their revenues on R&D, and are not able to get the talent and help they need.

In October 2018, they launched MetnMat Research, which is working to redefine R&D in India by making it “affordable, accessible, and accelerated”. MetnMat, an acronym for metallurgy and mathematics, which is what the founding team studied at IIT, develops cutting-edge products and solutions in the field of metallurgical and materials engineering. The startup has opened up its lab to every SMB keen to outsource R&D, and provides help in testing new materials, alloys, admixtures, hydration, mixing, and rheology.

“Everyone has an R&D budget, but we tell them that they can achieve better results with us rather than by having an internal R&D team,” says Tanumoy Bar, Co-founder of MetnMat. He adds their startup comes as a shot in the arm for Indian R&D, which lacks the requisite talent at present.

After almost eight months in operation, the startup has worked with over five industrial corporate entities and helped them change their R&D functioning.

The founders chose to start up in Kolkata since the city is an industrial centre and they are based there. How did the journey begin? It was as simple as walking into the office of two top cement and steel companies, and telling them that the industry should look at RoI on their research. They offered solutions that could change their research and help them work better.

One of the corporates gave them a project that involved heat treatment to find casting defects and yield of castings. By analysing the mixtures and changing proportions, the team was able to increase the yield of the castings for the company to 82 percent from the earlier 62 percent.

“Software has always existed to track data and tell scientists about the castings. But, you need to use the data to understand how the yield can change under different temperatures,” Tanumoy says.

Once this problem was sorted, the company paid the founders a retainer along with a success fee. The founders refused to divulge payments and revenues at this stage.

“Our model is unique because we also work with universities, including IIT-Kharagpur, to validate our research. Corporate are sure that the best minds from universities have validated our research,” Tanumoy says.

The four founders have completely self-funded the company with less than Rs 25 lakh.

“Instruments for the lab are expensive and for that we need to raise money. Only that, along with marketing the idea, will help us scale up,” Tanumoy says.

The founders’ hard work over eight months has led them to file three patents in copper alloys, ceramic, and composite applications. The intention is to show the world that Indian engineering can be frugal and, yet, can create great products. “The aim of any research is to increase the life of the product,” Tanumoy says.

According to FICCI, the per capita spend on R&D in India is $464. Compare that to the spend in Korea ($1,995) and the US ($1,471) and it’s apparent that India has some catching up to do. Mainly because Indian industry needs to compete with the economies of industrial scale built by China over the last three decades.

R&D is an extremely vital cog in the wheel for every industry. FICCI says the global spending on R&D has reached a record high of almost $ 1.7 trillion, and about 10 countries account for 80 percent of this spending.

According to the report as part of the Sustainable Development Goals (SDGs), countries have pledged to substantially increase public and private R&D spending as well as the number of researchers by 2030. Asian countries (including China, Japan, India, and South Korea) now account for more than 40 percent of all global R&D investments, with North American investments now less than 30 percent and European R&D only slightly more than 20 percent. North America (and the US) and Europe continue to lose global R&D share values on a yearly basis.

MetnMat believes that despite India’s slow industrial economy, the timing is right to enable

“make in India”. All the four founders have taken pay cuts, and want to build their startup into “a large lab outsourcing work from corporates across the industrial world”.

They are, at present, investing their time into battery technology beyond lithium ion tech. The team is looking at graphene and silicon-based hybrids with lithium ion to make batteries long lasting and more stable.

Eventually, the team adds that it wants to go to all the industrial clusters across India. They have no plans to raise money till they reach at least some critical mass with their existing clients. The next 18 months they want to prove that outsourcing R&D works. In India, companies that did outsourced R&D were Adarin and Techno-Sciences, both of which have their own product lines for the electric vehicle industry.